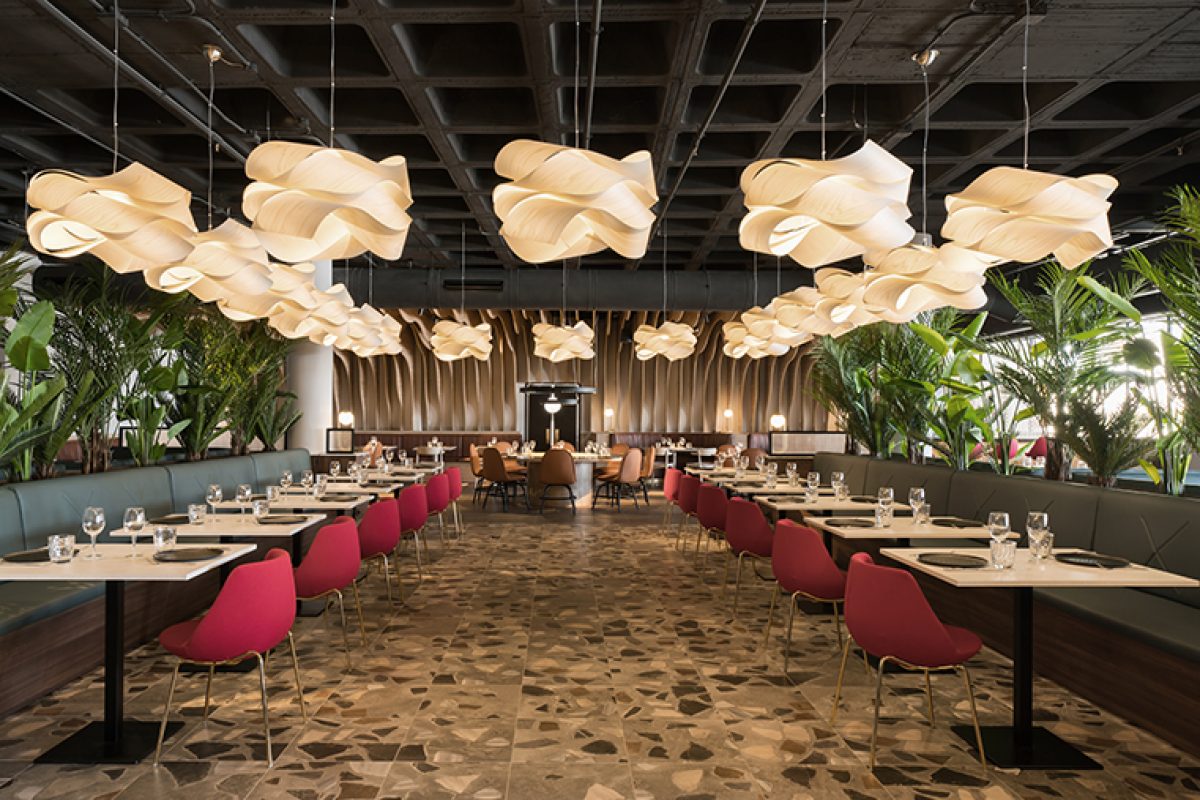 This is the first newly built establishment to be opened by the Piñero Group in Spain since 2003 and the company is looking to position itself as a benchmark in family holiday tourism at top-of-the-range hotels.

The hotel's theme focuses on the history of the Garden of the Hesperides: a character created by the chain whose story is part of Tenerife's culture and legends. 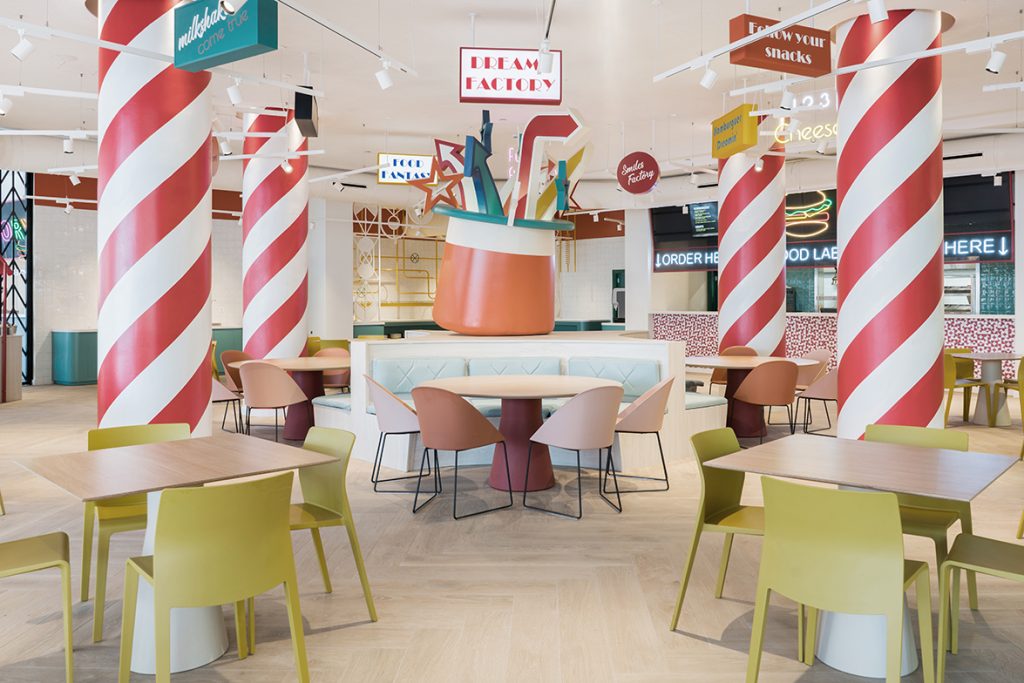 As its name suggests, this is a factory where dreams come true, where dreaming is allowed, where freshness, happiness and emotions form part of the surroundings.

The premises and the distribution of the space have come together to form a whole new concept of Pool restaurant based on colour and fun (magic).

The distribution is based on the central island, which contains a large sculpture (a magical hat charged with positive energy). The interior projects a multitude of graphic, colourful elements that turn it into a space of fun.

There are four columns set around the central island and estudi{H}ac has turned them into red and white, like four giant sticks of candy. 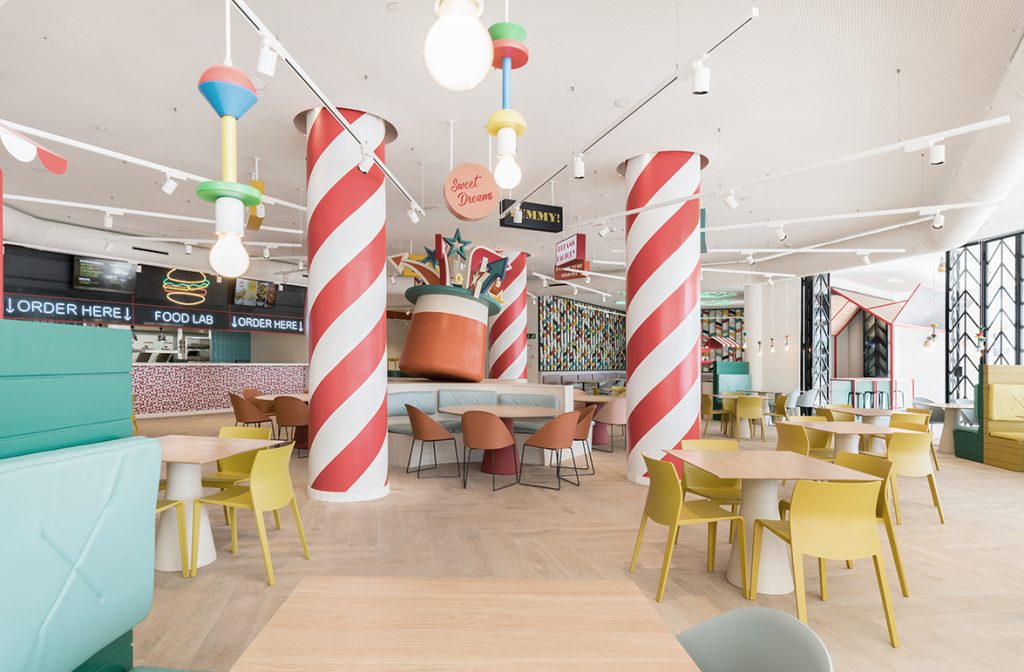 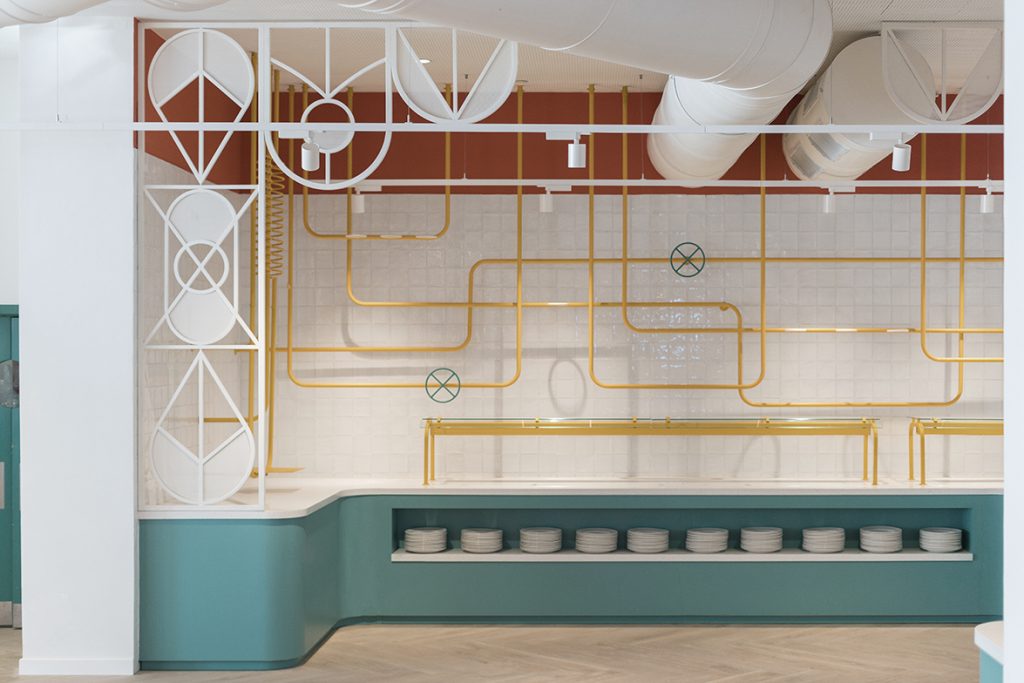 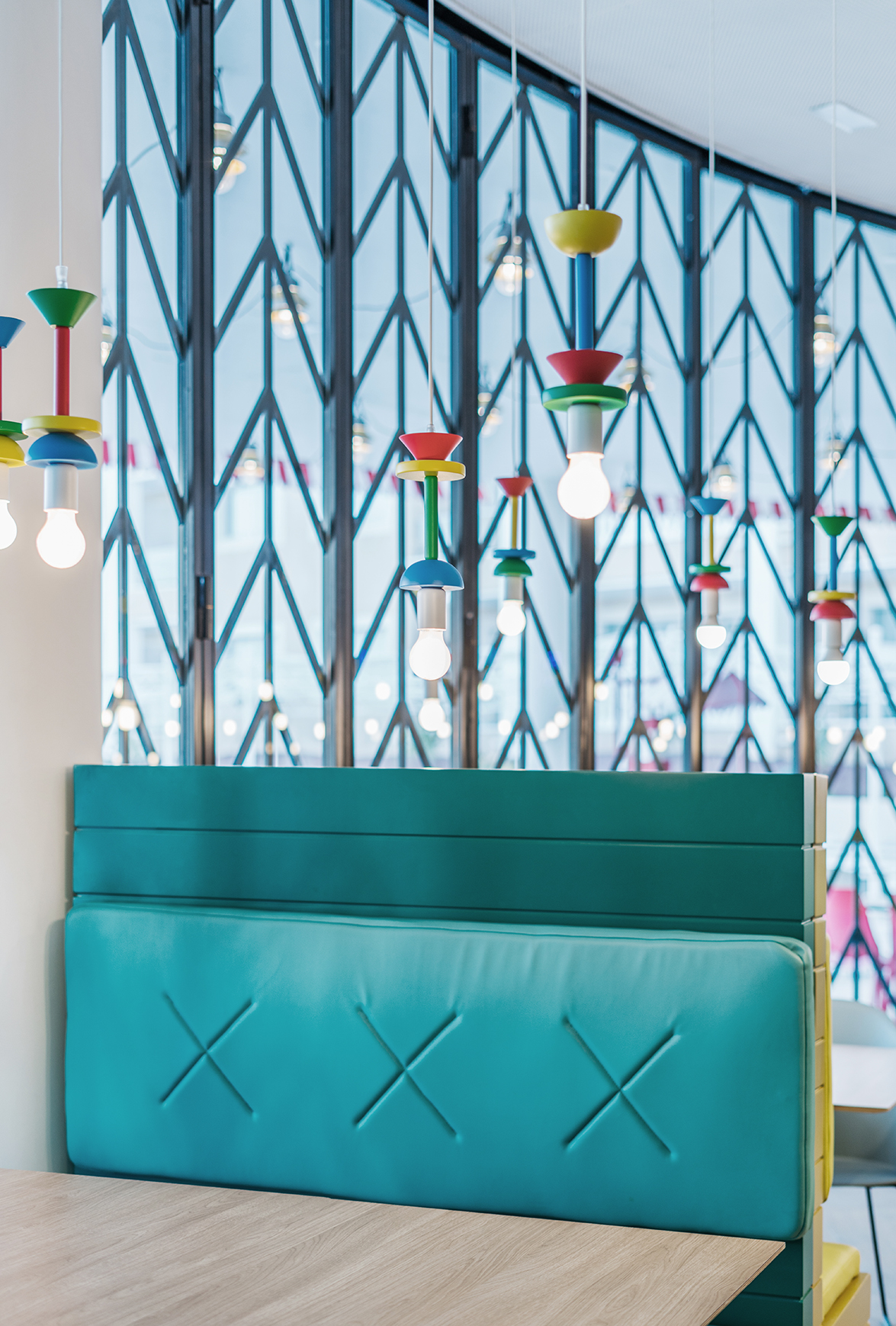 The other areas, such as the menu service and buffet area (salads, desserts, ice cream and toppings) recreate a large fantasy machine offering joy for the senses, with food and entertainment in the leading role.

The wall separating this space from the terrace is a system of moving doors tailor-made for this project and representing the local plant life on the island by means of a graphic design made with metal sections.

The exterior terrace combines all the colours of the interior to create a final explosion of colour, represented by a large mosaic created for the project.

To give form to this magical and colourful interior space, we have used a selection of furniture and lighting by established firms. 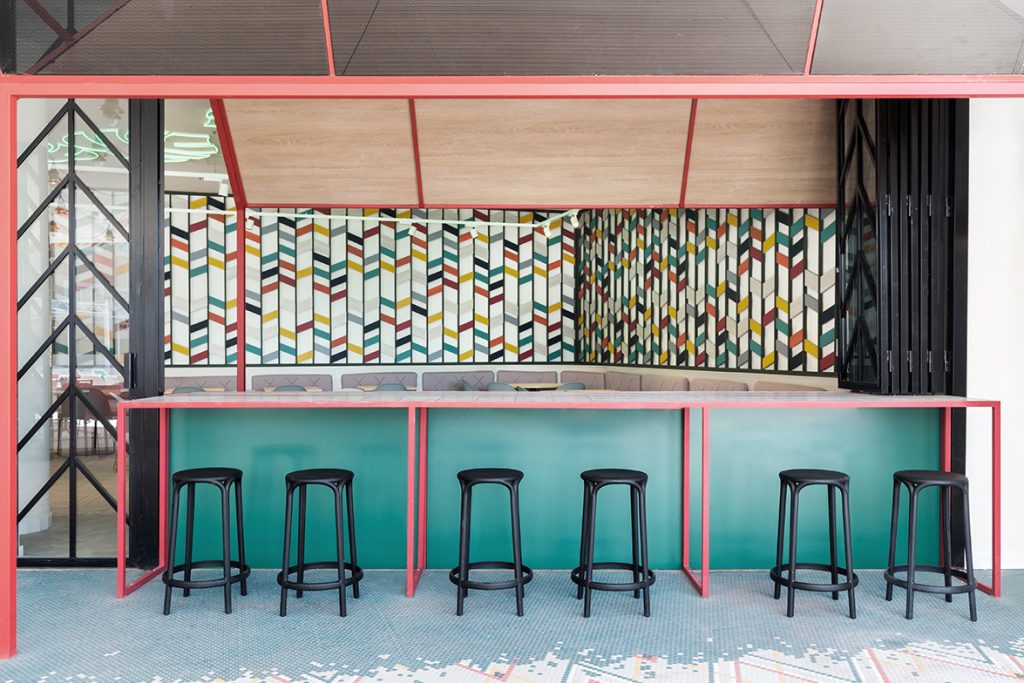 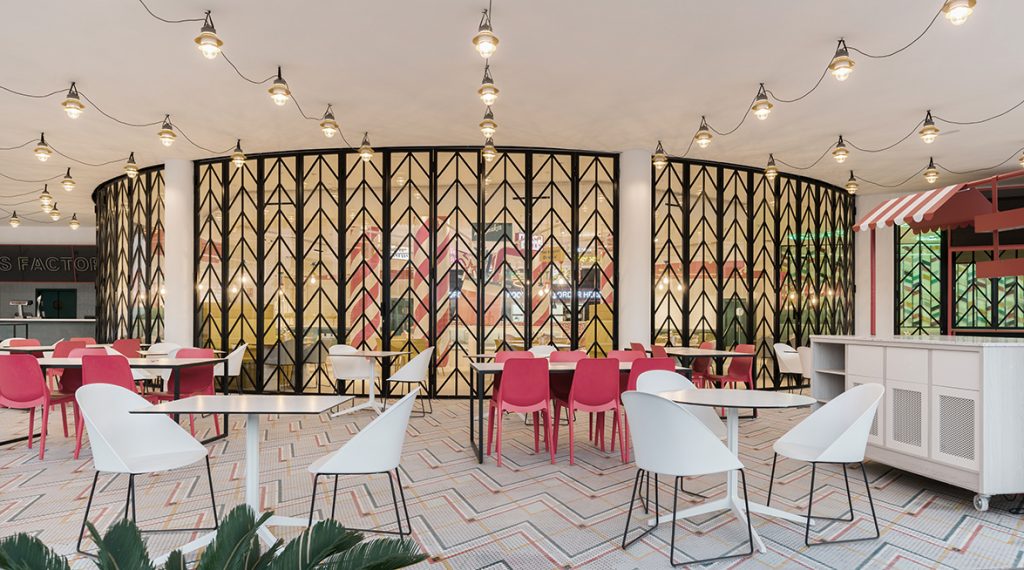 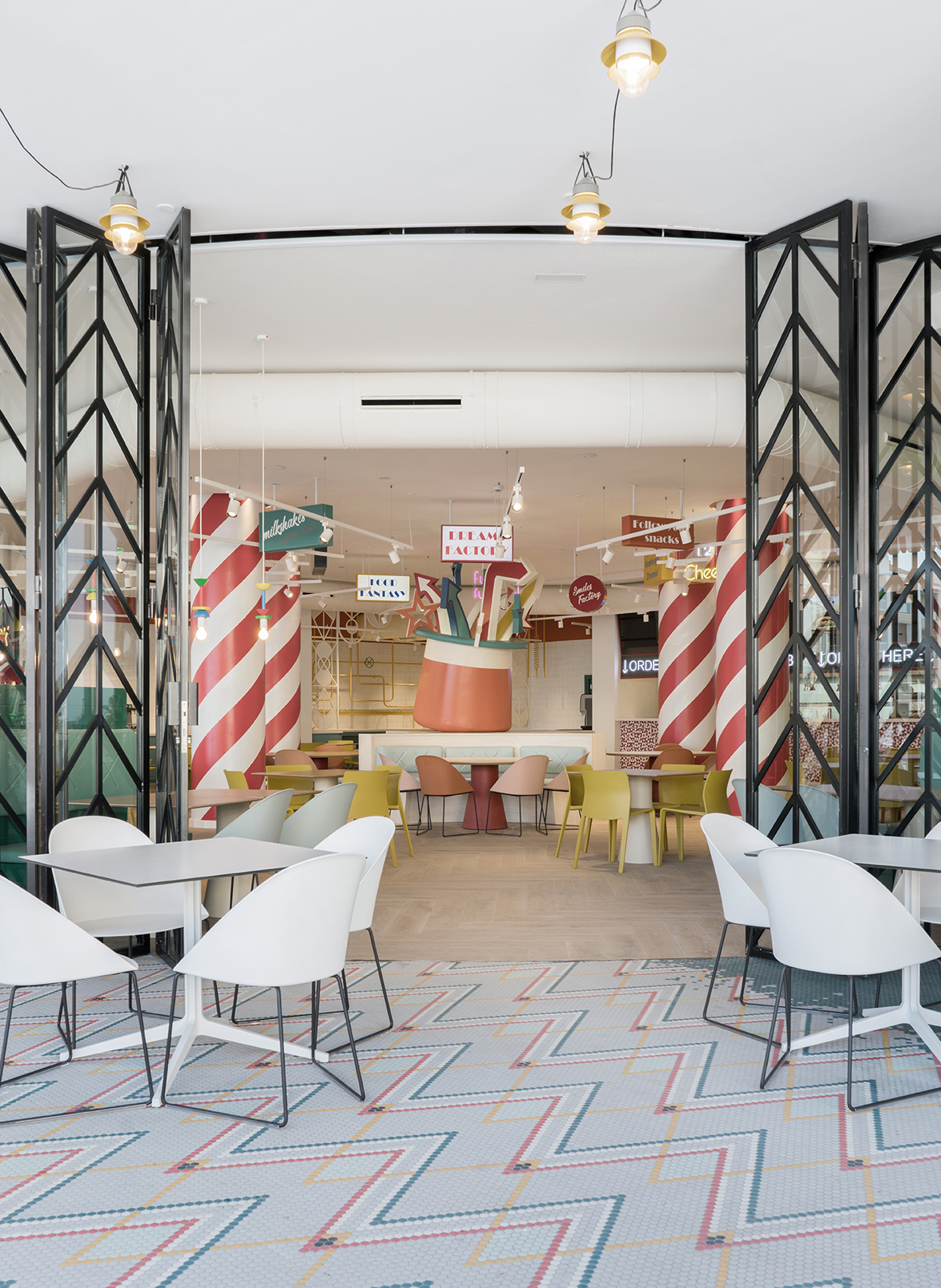 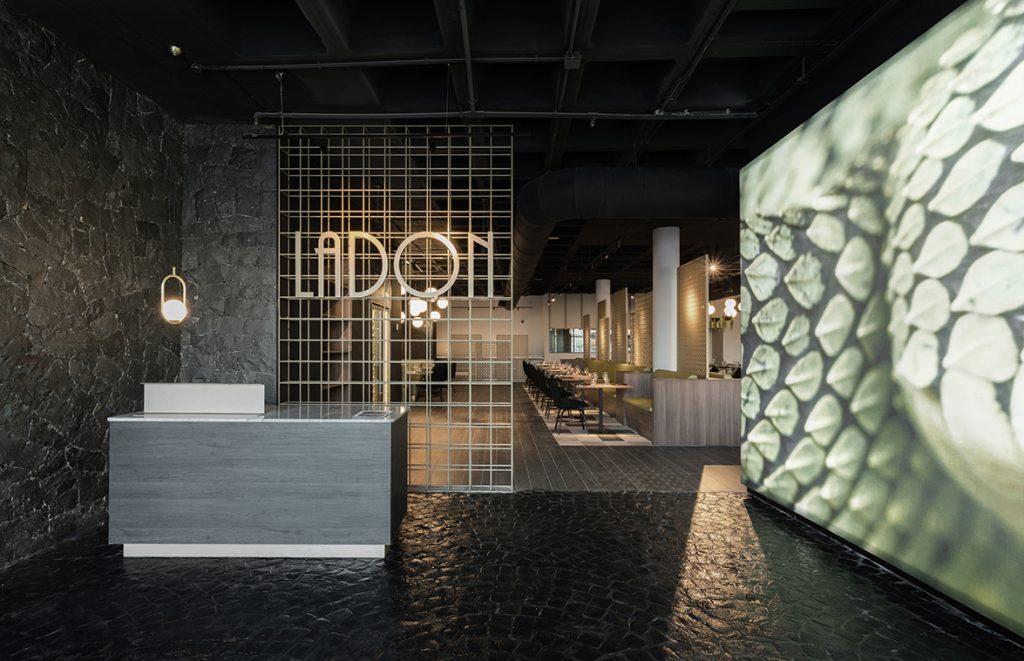 Located in the heart of the Hotel. The place is guarded by an imposing dragon with one hundred heads. Its name is LADON and, according to Greek mythology, together with the nymphs of the Hesperides, it was responsible for guarding the garden. The fire that sprouts from the volcano is as fierce as the fire that comes out of its mouth when a visitor approaches the tree of golden apples it so zealously protects.

The Valencia studio, estudi{H}ac, has used it as the base of this exciting story to distribute the layout of the restaurant in different areas with various textures, sensations and colours, combining areas with tables and tailor-made benches adapted to each part of the legend (transformation of the Dragon into a Millenarian Drago) to create an atmosphere of Fantasy and Dreams.

The selection of colours on which the project is based is dominated by ash and splashes of earth, green and red. Volcanic stone walls and floors, copper structures, black ceramic scales and a large image of a dragon's skin come together to create a tenuous atmosphere in the lobby. 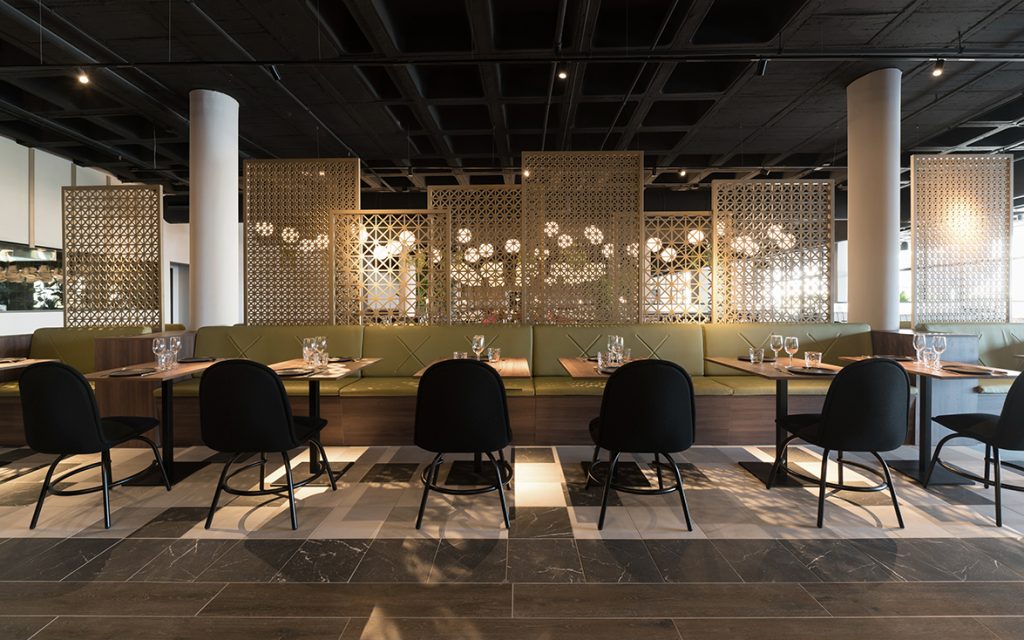 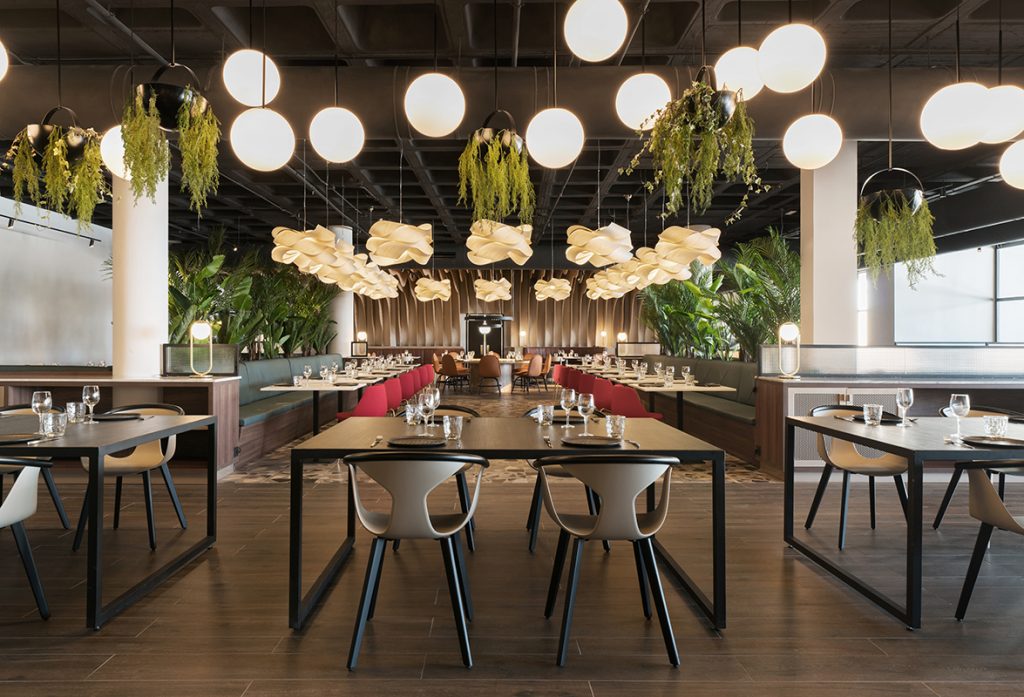 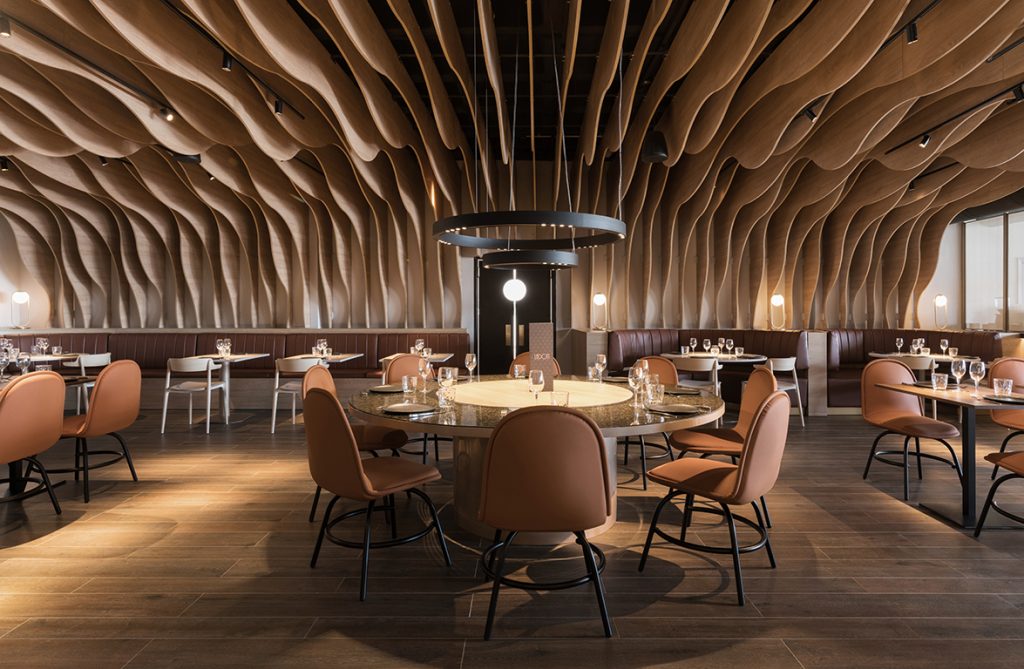 The fire is represented by an imposing barbecue that opens up on to the central axis of the space. The heart of the dragon is red and crowned with a set of lights that symbolize its tail.

The island's folklore and its interesting plant life is represented by the peculiar morphology of the Drago, transformed into a large structure of wooden slats that simulate the characteristic forms of the tree to generate a whole new area with tables inside the space.

The terrace includes all the architecture and crafts of Tenerife by means of a system of lattices around the outdoor terrace and the floor takes the form of a large black sand beach with custom-designed graphics.

All the perfect harmony of forms and texture transmitted in the Restaurant is achieved thanks to the combination and selection of furniture and lighting by established companies. 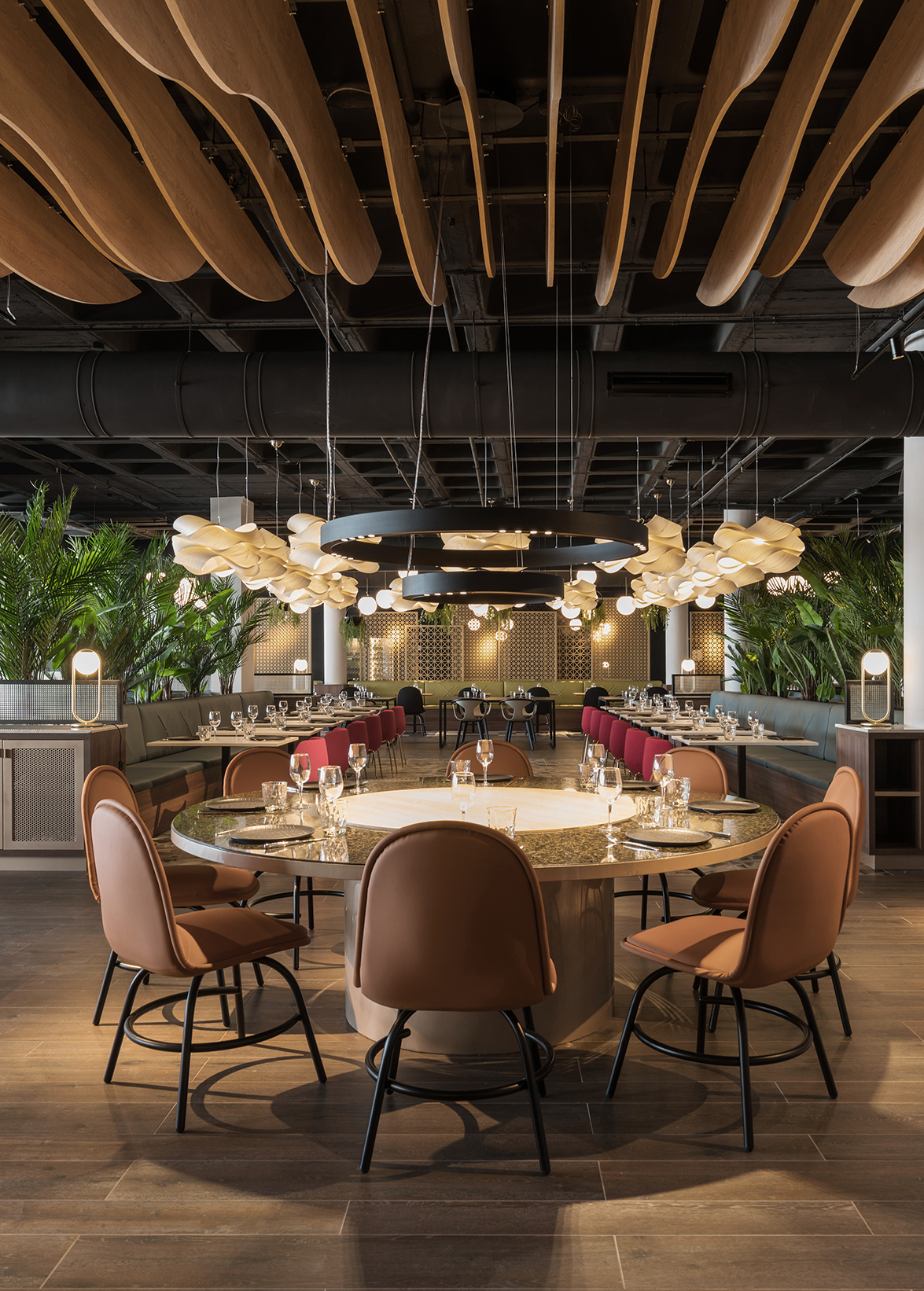 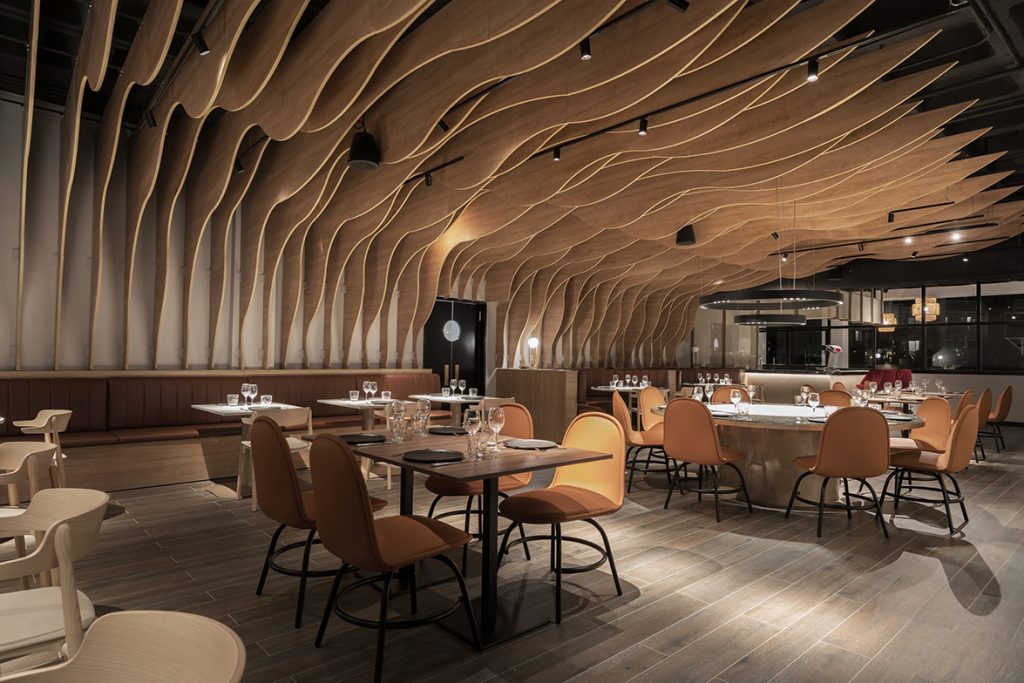 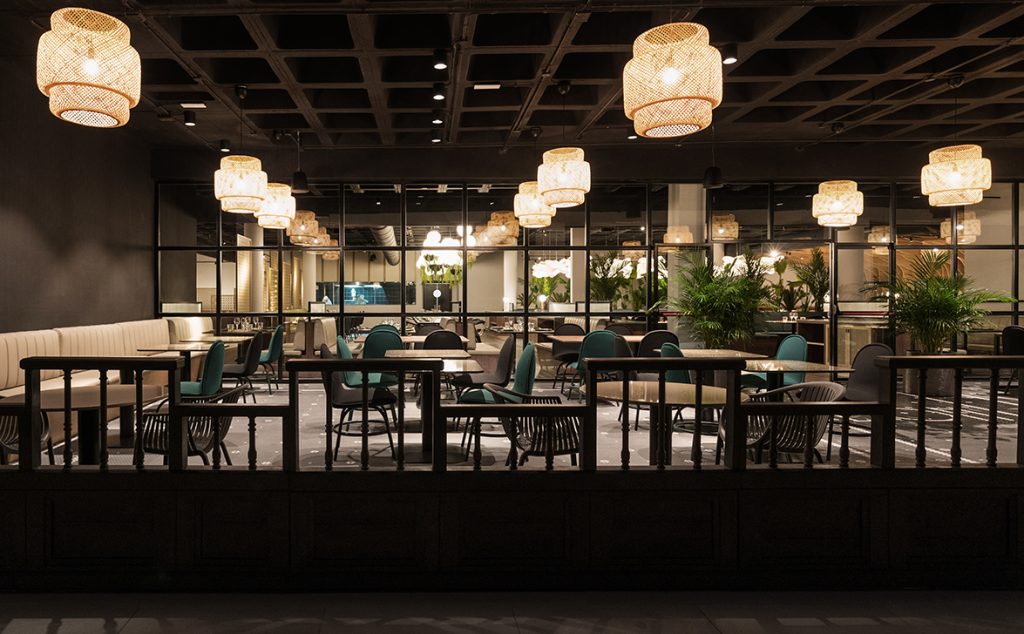 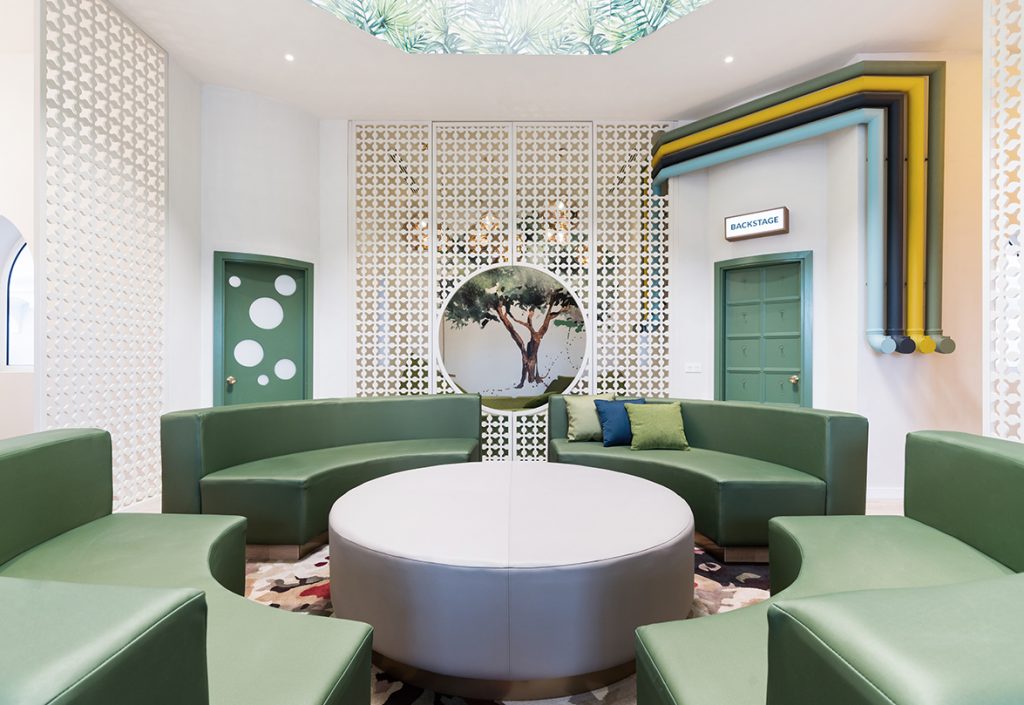 The project of this special Magic Suite involved the challenge of creating surprise because its location is inside the Fantasia castle that rises from the centre of the hotel swimming pools.

A suite that includes part of the story of the Garden of the Hesperides and an image of the peacock that symbolizes the Goddess Hera.

The story is laden with symbolic icons associated with the characters and the legend itself. The physical contribution these icons make to the construction has been implemented through architectural details that help reinforce the story.

The Fantasia stands surrounded by hills on which guests can rest and play, tree houses that act as beds, dressing rooms surrounded by plants, hidden treasures and three-dimensional illustrations... everything is possible in this Suite. 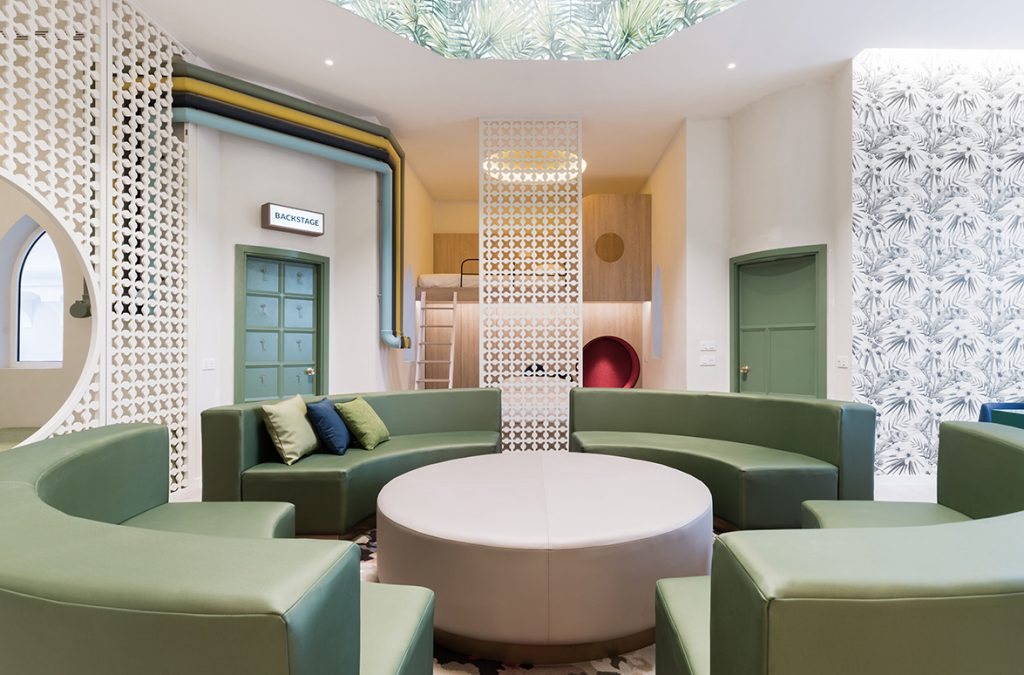 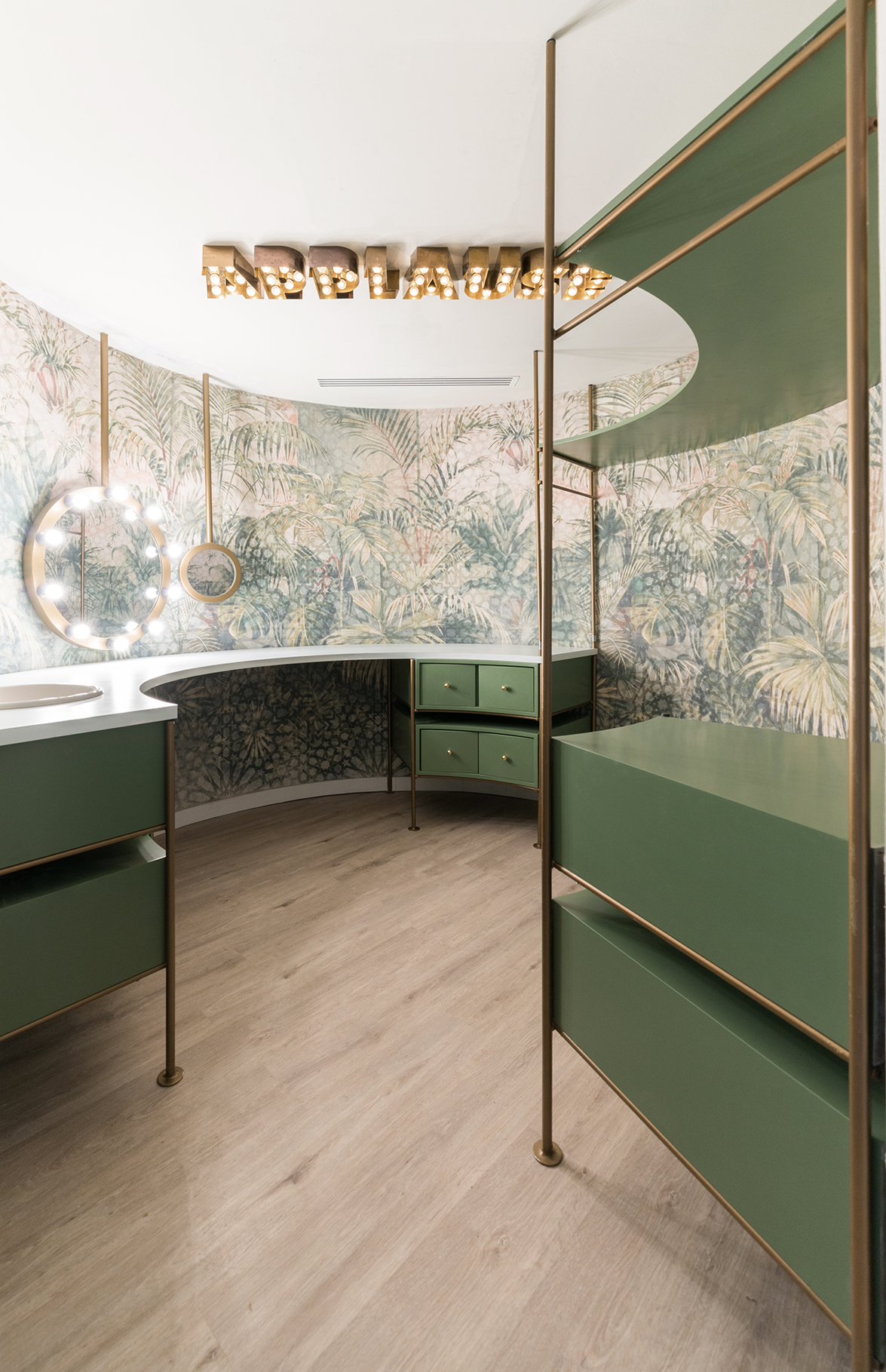 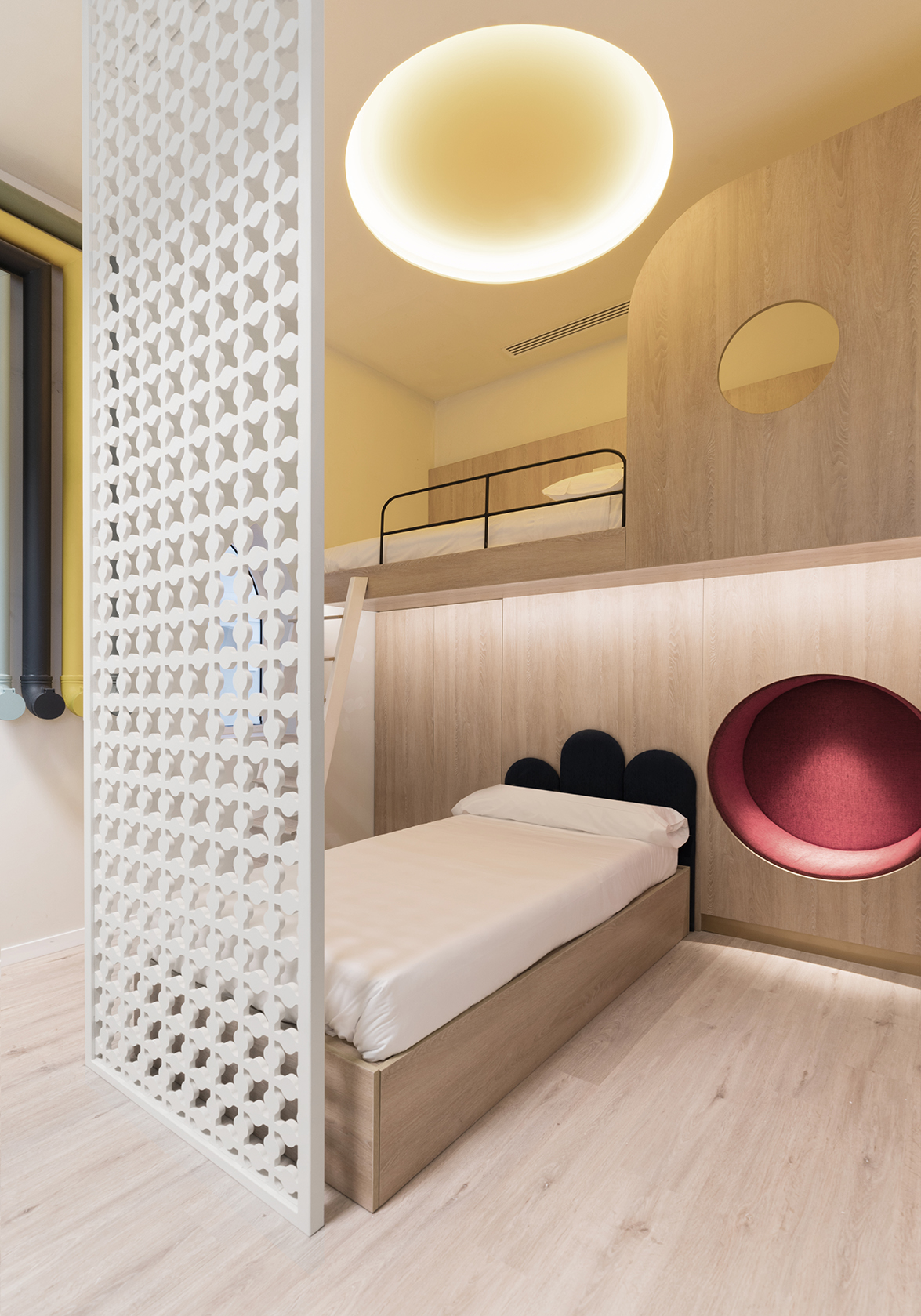 The towers of the castle used to get there create a large circular sofa in the middle of the Suite on a carpet with floral graphics representing the Garden of the Hesperides. The space is covered by a skylight that lets a large amount of light into the different rooms.

This central area has two bedrooms next to it and a dining area with access to the castle's private terrace.

The play area is a large hill made of foam like a huge organic sofa next to a swing. Above the swing, there is a graphic tree on the back wall symbolizing the tree of golden apples, represented by a rainfall of golden lamps.

The children's room is connected by a number of fun-coloured pipes they can use to get from one room to another.

A magical, interactive suite where guests can enjoy every area and be what they want to be. 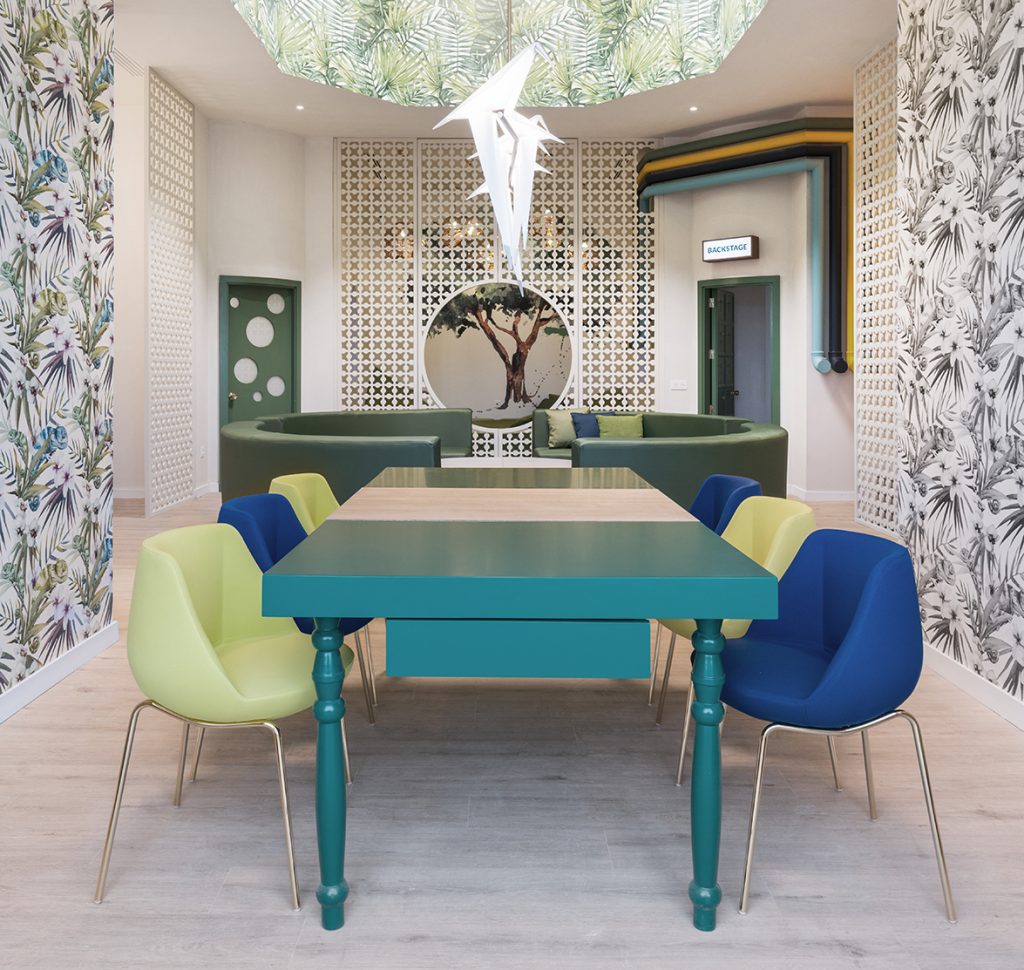 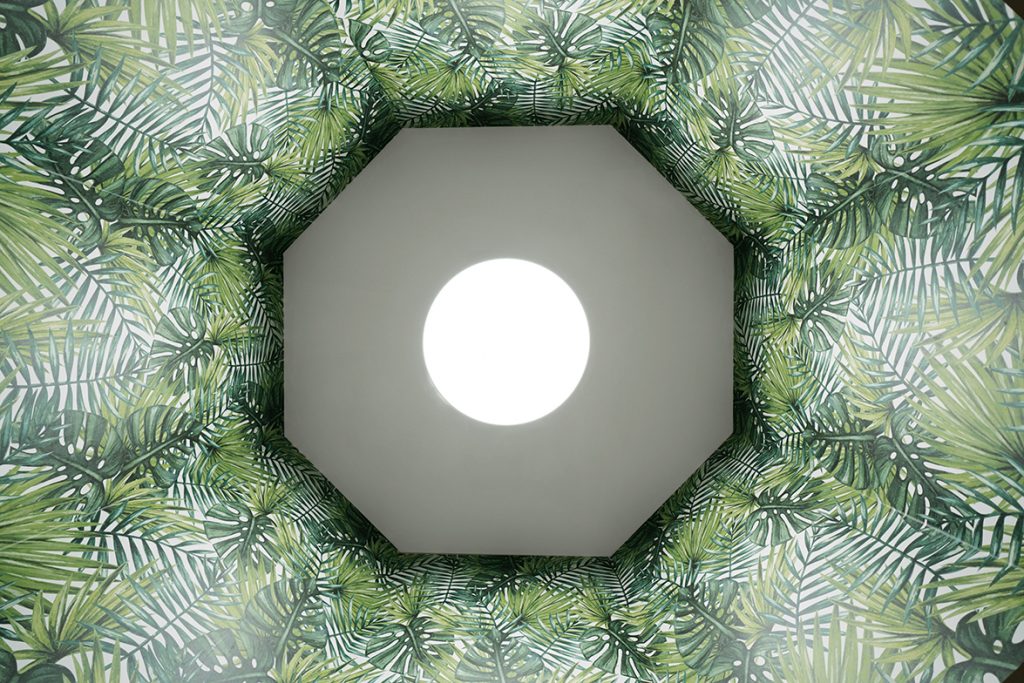 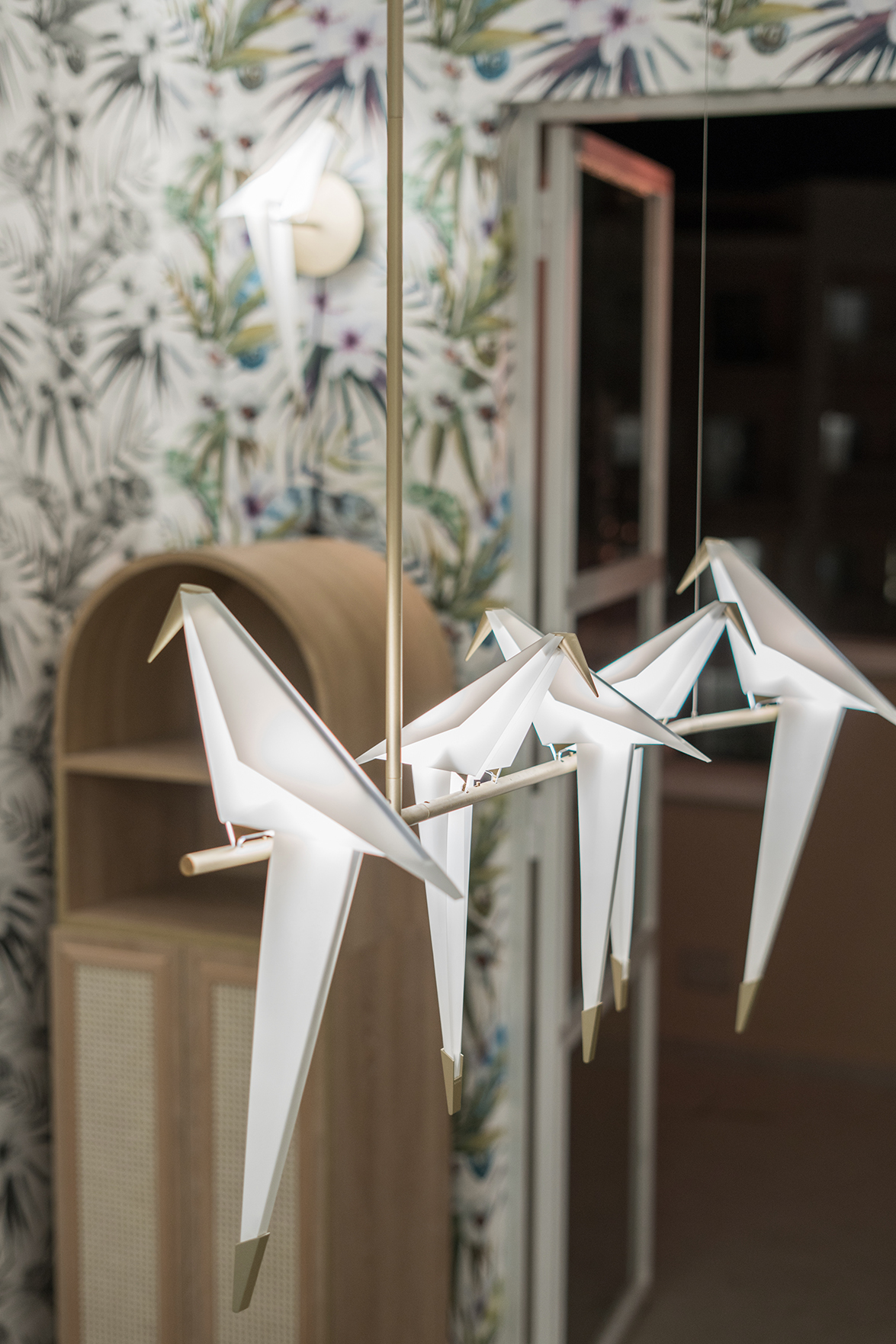