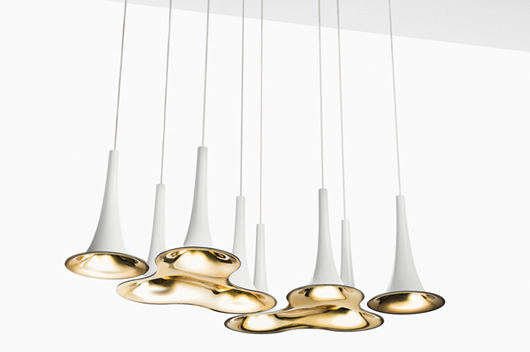 Interview with company and designer: Lorenzo Truant, Art Director at Axo Light, and Karim Rashid tell us about their new lamp Nafir. Nafir is the new lamp, fruit of the meeting between the imagination of Karim Rashid and the productive know-how of Axo Light: and here's the story as told by the designer and company.

Karim Rashid, where did the inspiration behind Nafir's design come from? Imagination pure and simple or association of ideas?

Karim Rashid: Nafir is imagination pure and simple. I started to do the first sketches thinking of light as a complement to sound. For 20 years I have been fascinated by the idea of flat surfaces which become transformed and create fluid shapes. So originally, I thought of a surface pulled upwards at various points: transformed like this, the surface assumed organic, fluid shapes, similar to those of a trumpet. What I wanted was a lamp which was also a little like a sculpture, lovely even when the lights were off, and that it also was functional because of the LED. I also wanted a family of lamps whose shapes could be organically grouped to create a fantasy panorama comprised of light and shape. 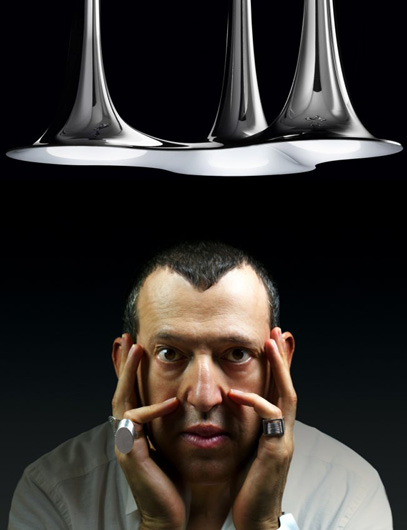 Light is a wonderful non-material phenomenon. It creates a state of mind, changes feelings and mindsets, produces well-being. At the same time, a lamp as an object can represent a symbolic extension of the function or be a pure sculptural shape. Over the last 10 years, no household element has changed so radically as lighting: the shapes can be purely expressed as design, while light sources are more efficient and flexible than in the past. 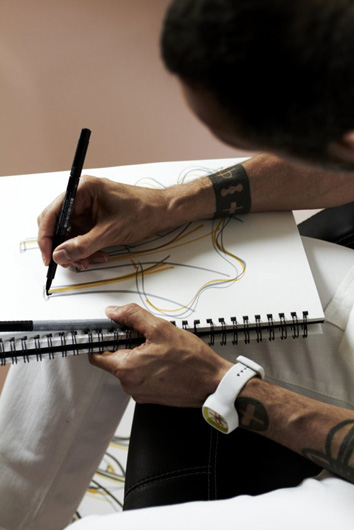 Designing a lamp and designing furnishings: what's the difference?

Karim Rashid: Lighting differs from furnishings in two fundamental points: one is technology while the other is interaction with the user, as light is often more passive and less tactile than furnishings. Since interaction with a lamp is often limited to pressing a switch, it is clear that a lamp must be functional but it also has to have an attractive shape, a distinctive shape which communicates with the user even when the light is off (and that is for most of the time). Nafir is an example of a lamp which engages the attention whether on or off. Nafir is a functional sculpture. It is dynamic, its fluid shape becoming the expression of the light itself. 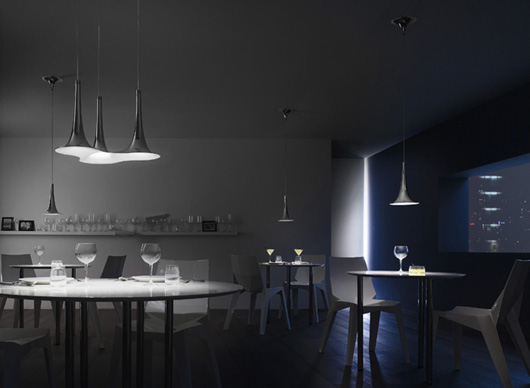 Lorenzo Truant, Axo Light, can you describe the journey from sketch to finished product?

Lorenzo Truant: As soon as we saw the first concept, we immediately understood what Karim had in mind: a completely digital construction of a surface with fluid outlines which is lifted on one or more points so that it forms curves with the cusps. It's what happens if, on a stretched elastic canvas with curved edges, you take hold of one or more parts and pull upwards. Axo Light took this initial abstract image as its starting point, rationalised various typological and technological aspects, took the idea forward and made it reality: it can be said that Karim is the father of Nafir and Axo Light its mother. 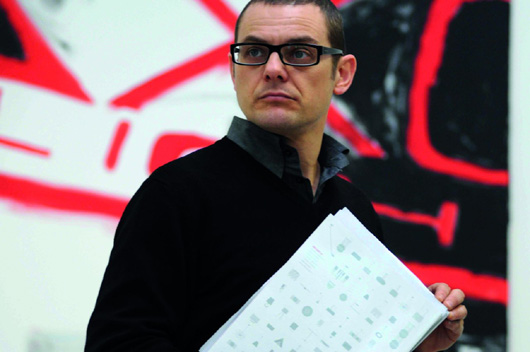 Nafir is the name of a North African trumpet, used to obtain particularly shrill sounds: why choose this name for a lamp?

Lorenzo Truant: We chose the name together with Karim. You can listen to a lot of music in his New York studio and the actual inspiration for the design comes from music. Nafir's shape is similar to a trumpet. Well, the nafir is a small trumpet of Persian origin which then became widespread over all of North Africa where it is still in use today. Basically, it is a tribute to the designer's North African origins.

I like to think that Rashid's contemporary vision, entirely shared by Axo Light, contains particles of tradition: I have always been moved by the thought that the future is here thanks to everything in the past or, if you prefer, that we look at the future as a ‘race towards the archetype’. This remains true also with respect to the Axo Light collection and its contents. 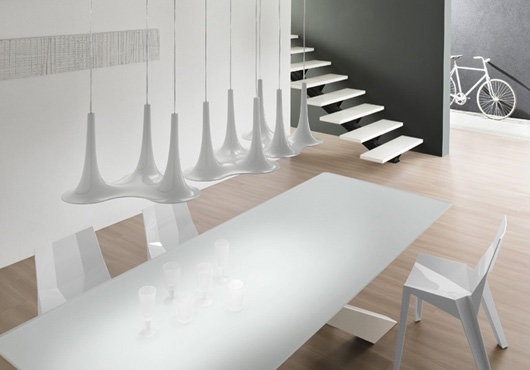 How does Nafir fit into the Axo Light collection?

Lorenzo Truant: An ‘easy’ but not commonplace lamp, highly attractive because of how it was conceived yet, at the same time, easy to understand: this was the company's and designer's shared objective.

It is extremely important that there be a good relationship between designer and company. The designer must be able to express his personality freely, seeking however to understand the brand's requirements. The manufacturing company on the other hand must know how to take the designer's ideas which sum up who they are most closely and make them its own. Nothing other than this synthesis will bring about a perfect product. 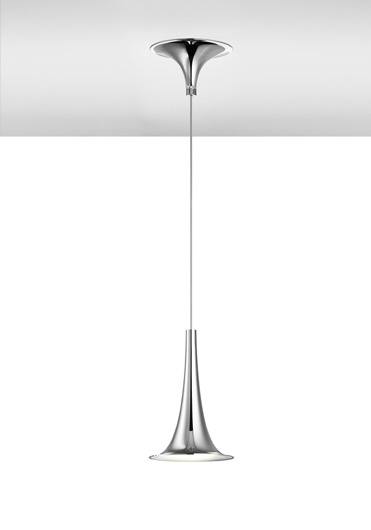 Which are Nafir's uses? And the target?

Karim Rashid: Nafir is ideal for group arrangements: its flexibility makes it perfect for public areas such as hotels and restaurants as well as residential areas. I can already see a restaurant with just one long table which runs for the length of the room with a line of Nafir on it, all connected one to the other... it would be amazing. 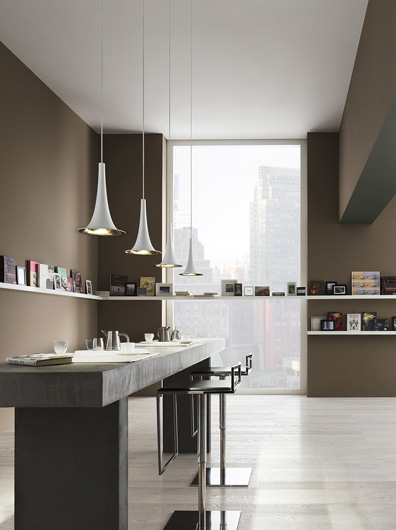 I travel for most of the year so I spend a lot of time in hotels. I’m always thinking about these environments and how I would change or improve them. It's surprising, but it would appear that many hotels think of the lighting as a secondary requirement and very often the lighting is inadequate. Perfect light is that which adapts to all the different kinds of environment in a hotel, from a narrow corridor to the space of the lobby, which enables the architects to fill and enrich the area. Nafir is a perfect example: its shapes unite to create a dynamic and always unique panorama, an expressive/theatrical lighting system which does not however sacrifice function. Everyone can experience Nafir in a truly exclusive manner. 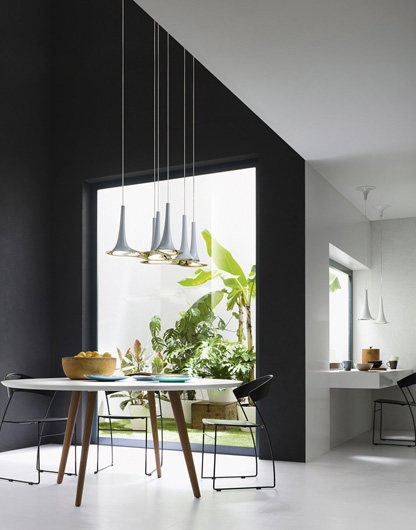 Lorenzo Truant: Nafir can be appreciated by clients such as architects and designers looking for a sophisticated product, but also by any Axo Light client on the lookout for a glamorous high quality item to light, for example, a dining table in their own home, either in the single version or the groups formed by three lights or one. Briefly, I think that Nafir's target clients are all those categories seeking a simple, contemporary and original item of top quality.

Lorenzo Truant: The light from the suspension lamps must be more or less concentrated downwards: a light which gathers in around itself and does not diffuse to other parts of the space. Once we had found the best type of light for the product, we had to decide whether to go for a halogen or LED spotlight. We decided to choose the light source which looks to the future, in other words LED. Apparently it's the more expensive but the life of these spotlights is over 35,000 hours and therefore the initial outlay is soon recovered. 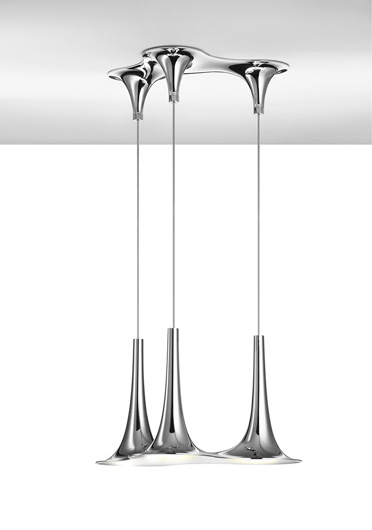 Karim Rashid: When it comes to lighting, the new LED and OLED technology has enabled designers to expand their ideas on shapes of lamps. We are no longer subject to the limitations of halogen lamps and so today (and in the future) lamps can take on new shapes, totally different from those of the past. I obviously find this extremely exciting as I can now work solely on inspiration.