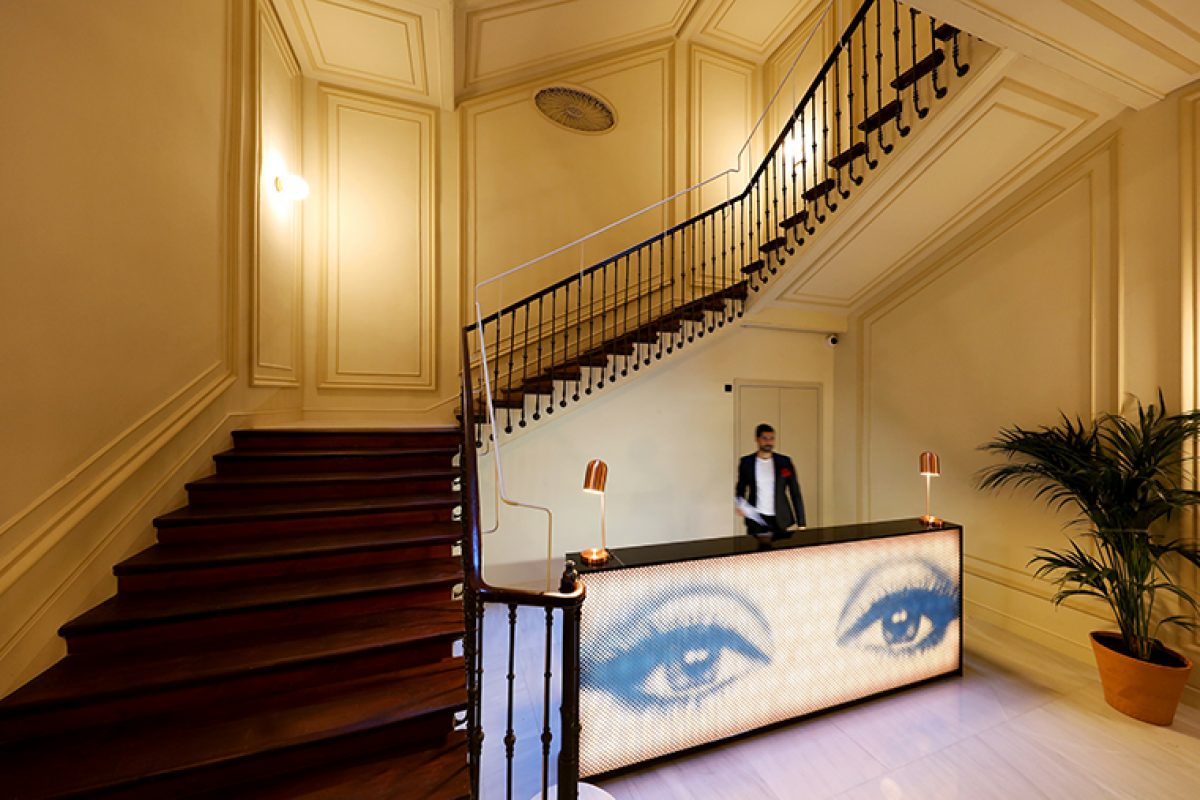 El Equipo Creativo has surprised us once again, with the design of the Axel Hotel Madrid on Atocha Street, whose design superposes a series of historic references forming a complex and explosive tandem. In addition, this award-winning multidisciplinary studio has also designed the Bala Perdida Club and Las Chicas, Los Chicos and Los Maniquís restaurant, both located in the same hotel, but due to their scope and interest for us, we will dedicate separate publications. El Estudio Creativo explains how the Axel Hotel Madrid has carried out.

The objective was to create a hotel where one could breath a free and fun atmosphere with a disruptive touch, which would invite different types of public to enjoy the public areas of the hotel.

One of the starting points is the privileged location of the AXEL Hotel in the very midst of Madrid's literary neighborhood, today the epicenter of the city's most cosmopolitan environment.
Another starting point is the palatial 19th Century building in which the hotel is located, where its noble rooms still conserve elements of great patrimonial interest, lavishly decorated ceilings, intense colors on the walls and baroque decorative details.

An important role in the design choices was also played by some of Madrid's most traditional and popular characteristics as well as some of the most well-known visual elements such as those related to the bull fight, the “mantilla” or the gypsy esthetic in general.

And finally, closing this strange tandem is the explosive philosophy behind the AXEL Hotel chain, whose hotels are designed for the LGBTQ community creating free spaces where sexual diversity is welcome and promoted and where diversion is a priority. 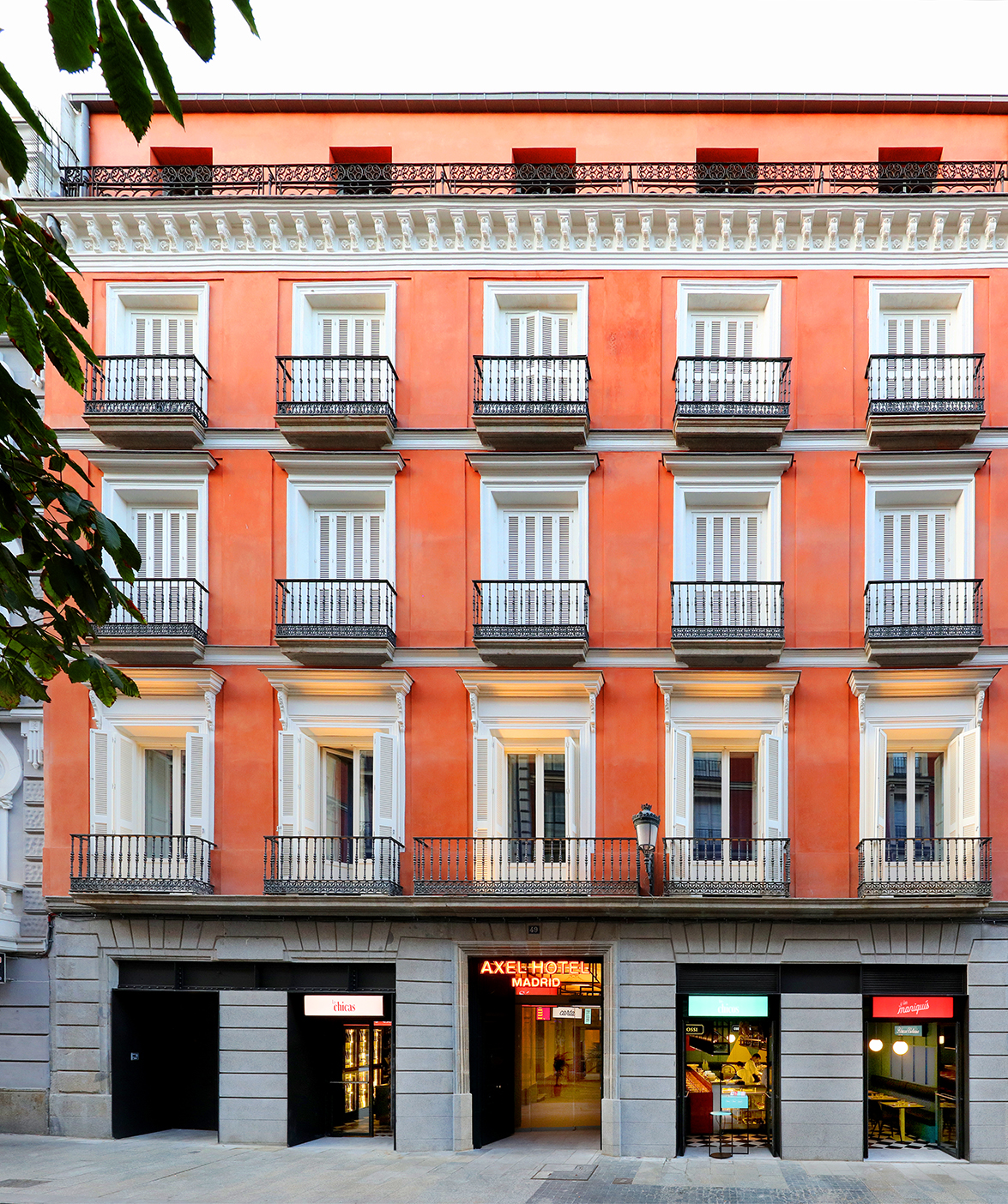 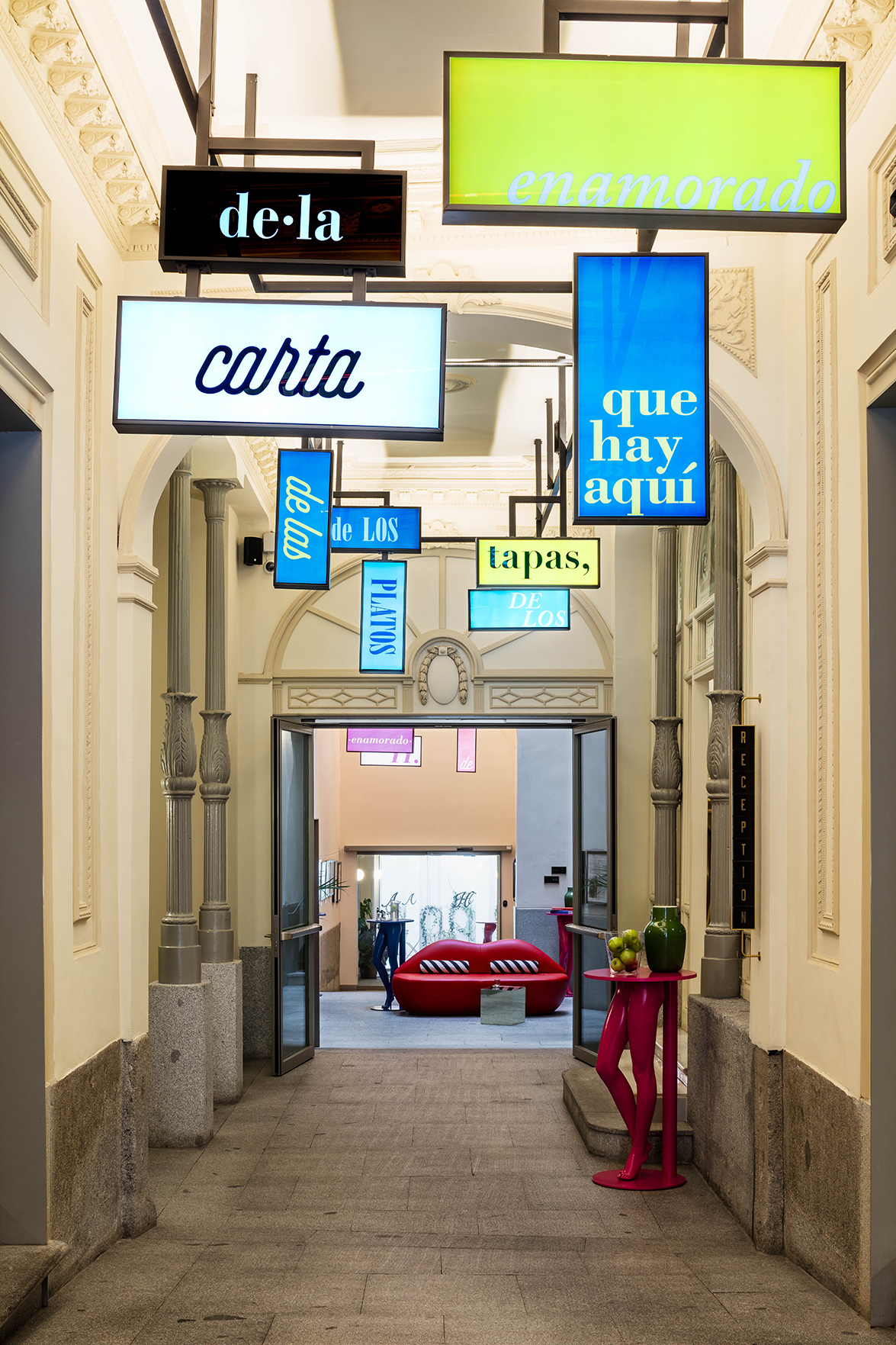 From the beginning we were interested in creating an amusing dialogue among all these starting points and historic periods so important and antagonistic in the history of Madrid and to which Atocha Street has been a privileged witness.

In order to achieve this atmosphere, the most important strategy in the design is the use of color, an element which accompanies us throughout all the areas of the hotel and which is applied with different character and material nature in each zone.

Posters, brightly lit with cinematographic and musical references to the “Movida Madrileña” together with mannequins and other flashy elements invade the entrance way to the hotel and its reception area, welcoming the guest to a carefree and festive atmosphere. 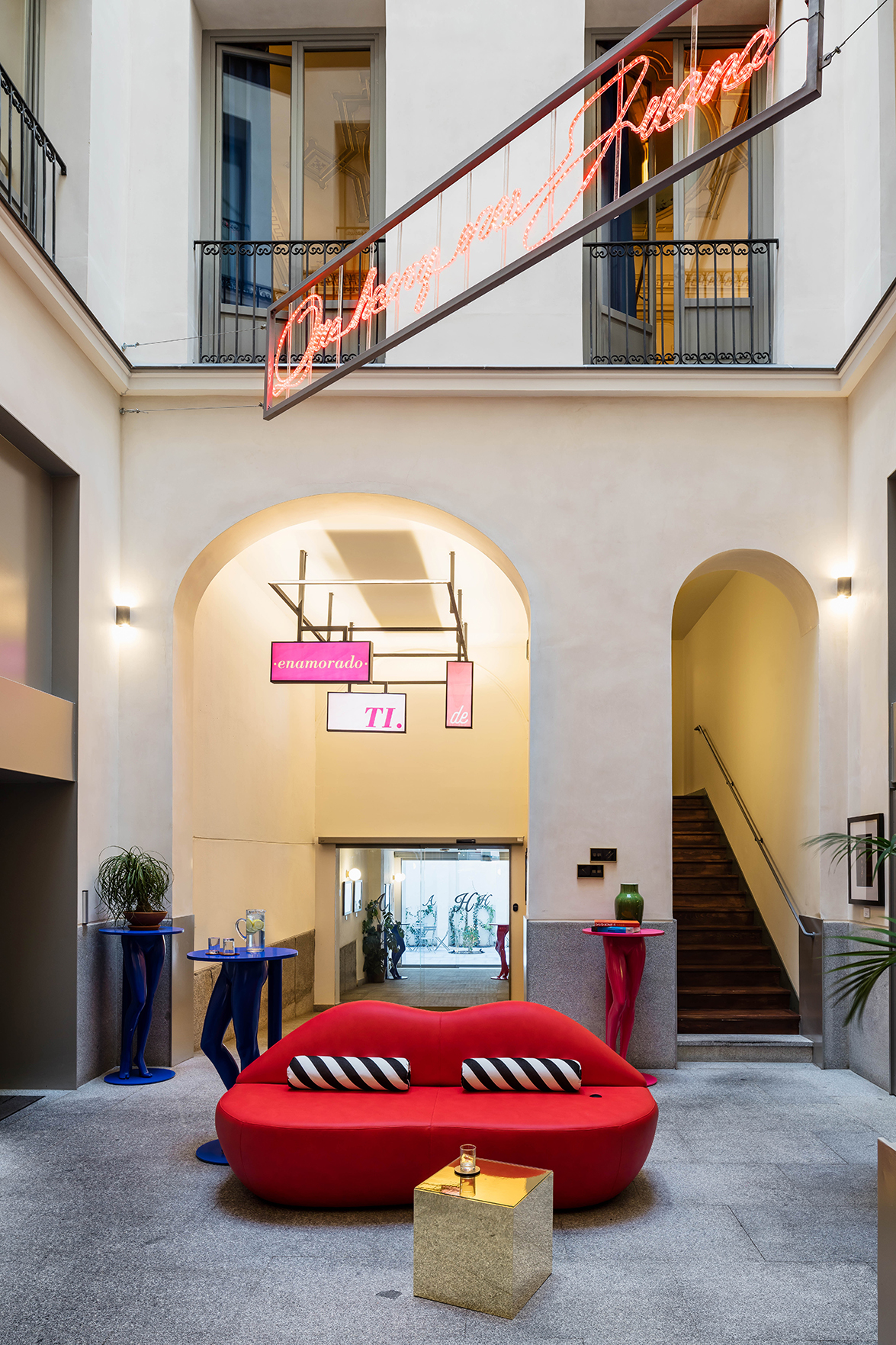 The introduction of texts, words and phrases in the form of bright lights and neon's makes reference to the literary past of the neighborhood, but with more popular messages and winks/insinuations. It is precisely in the courtyard of the building where this “popular literature” takes on importance and climbs up the patio walls like an echo of the theatrical voices of the “Comedy Playhouses” of the Golden Century.

Located on the first floor were the original noble rooms of immense patrimonial value and containing a great variety of finishes and colors. The common denominator which exists in all of them is the golden decorative detail on the walls, ceilings and handicrafts. 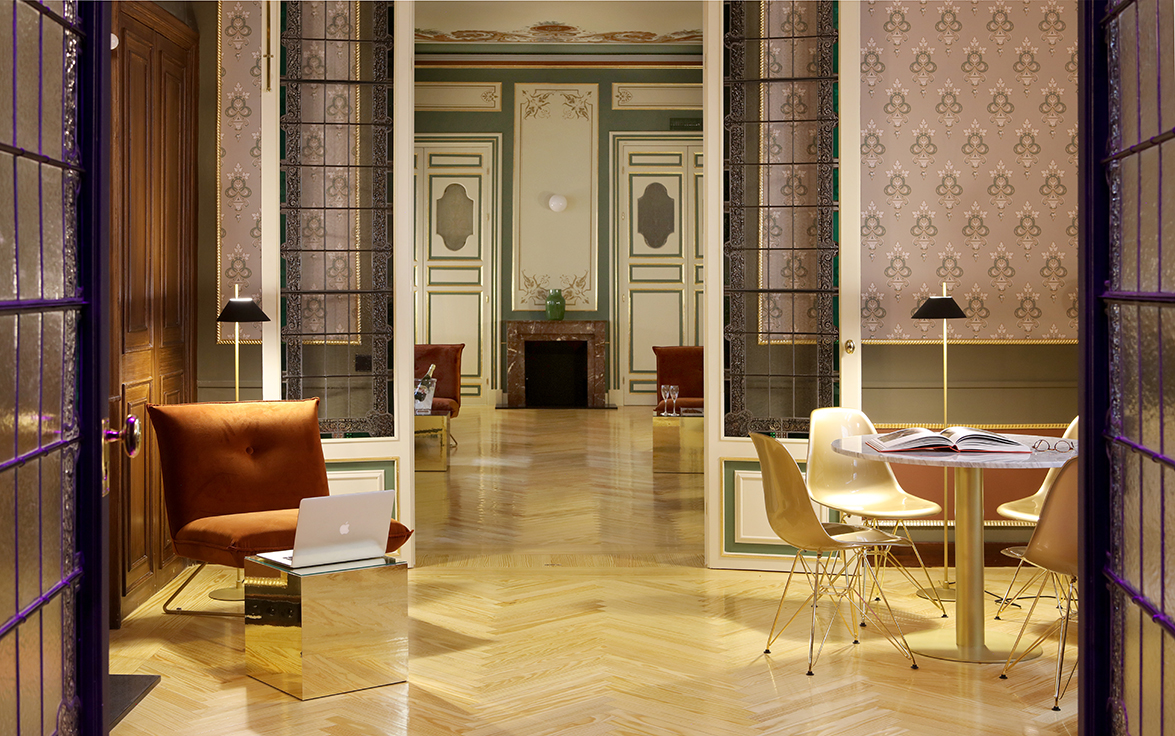 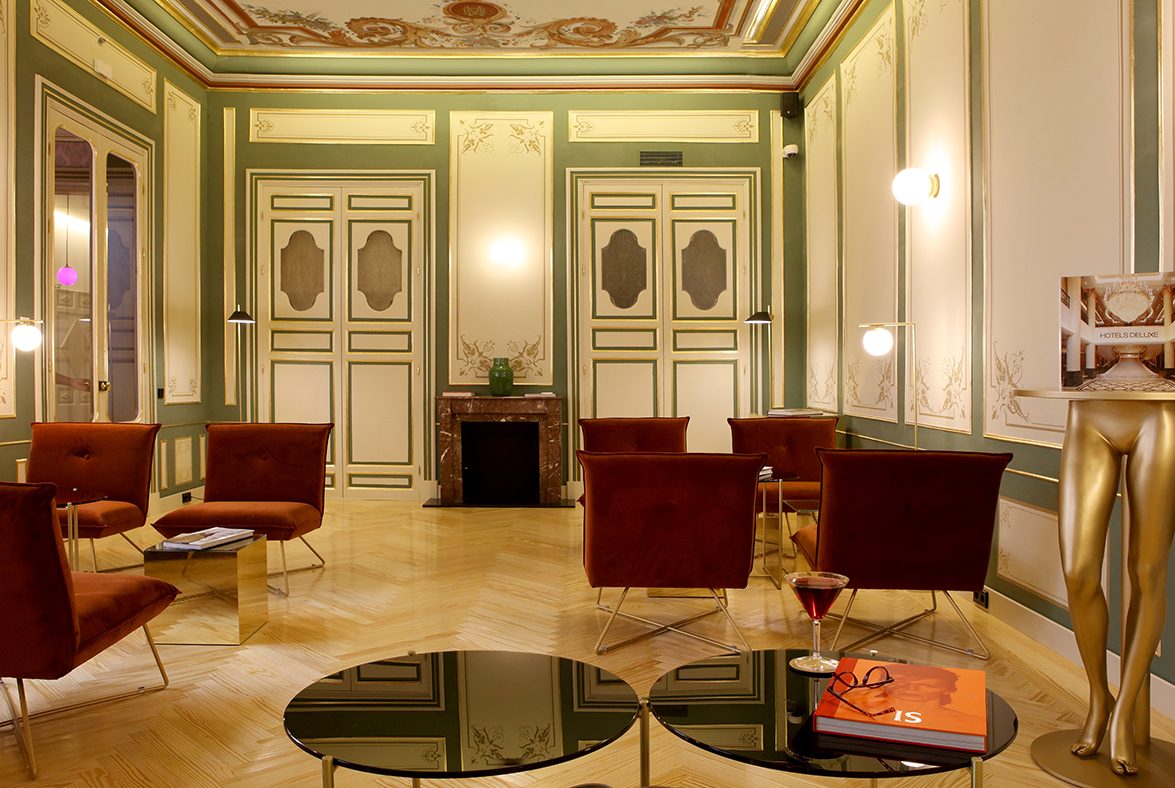 The new distribution has converted some of these rooms to public lounges and others to suites, emphasizing in both cases the common denominator, gold, which will be the color of all the new pieces of furniture in these spaces. 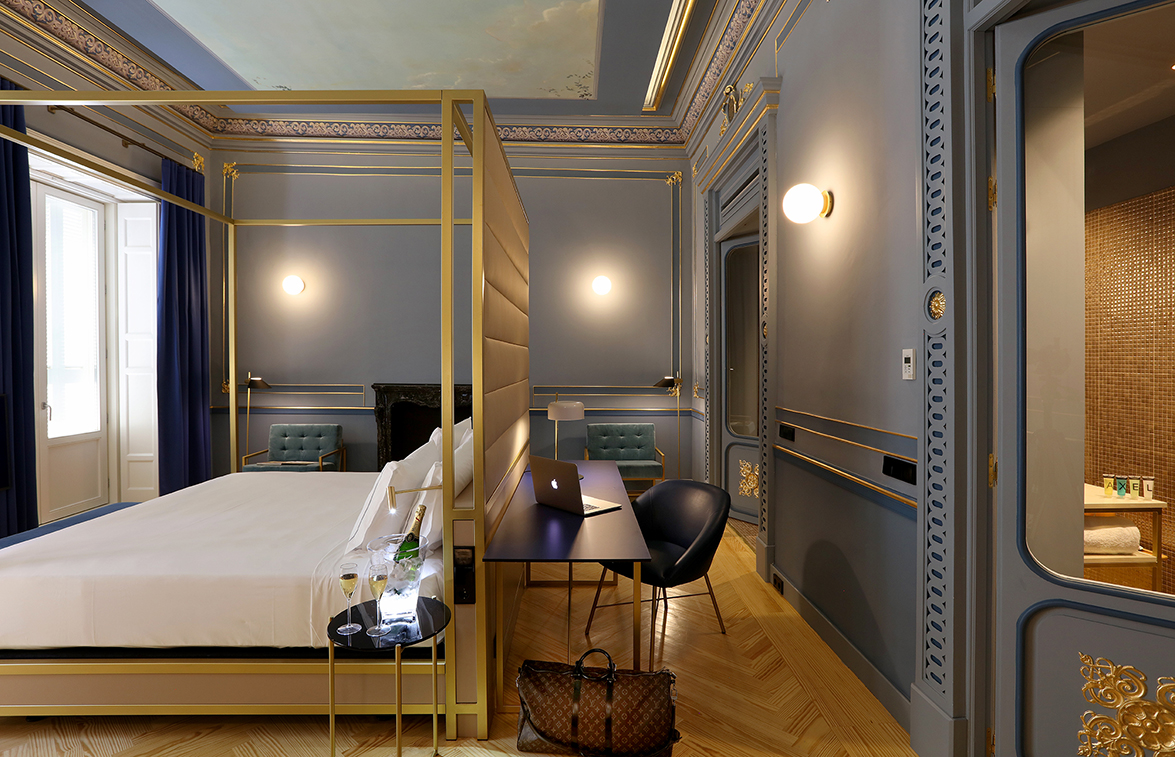 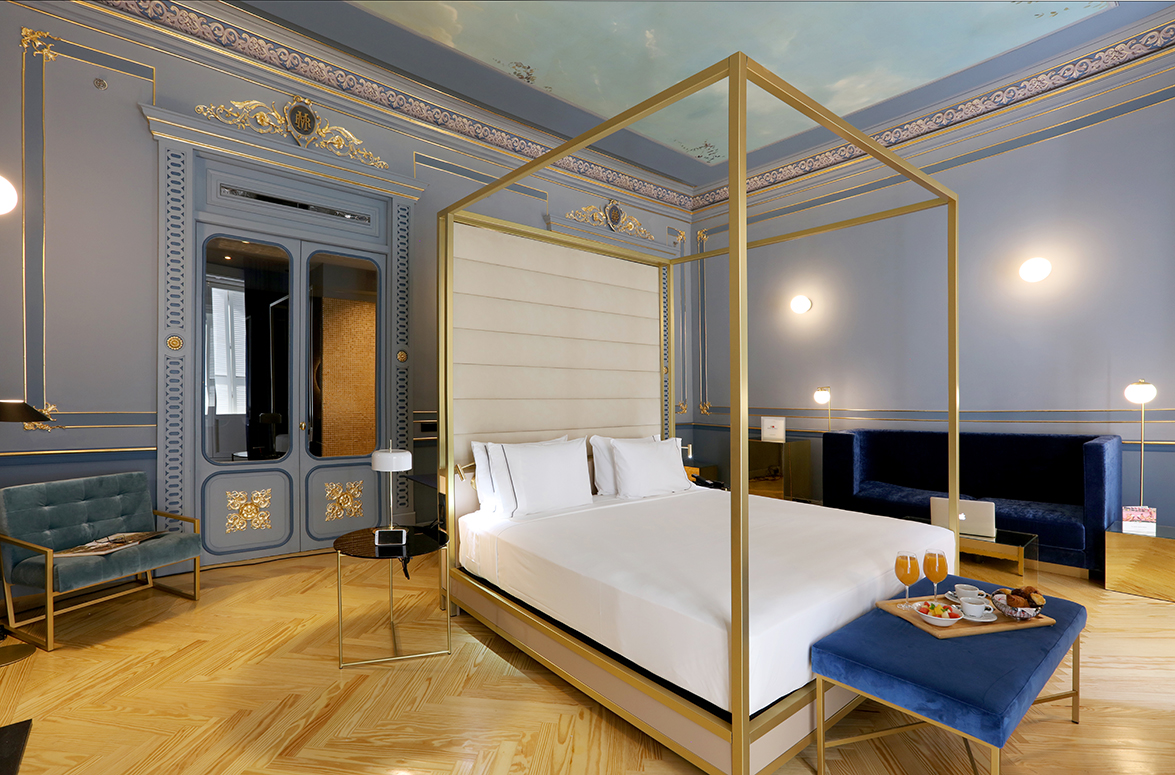 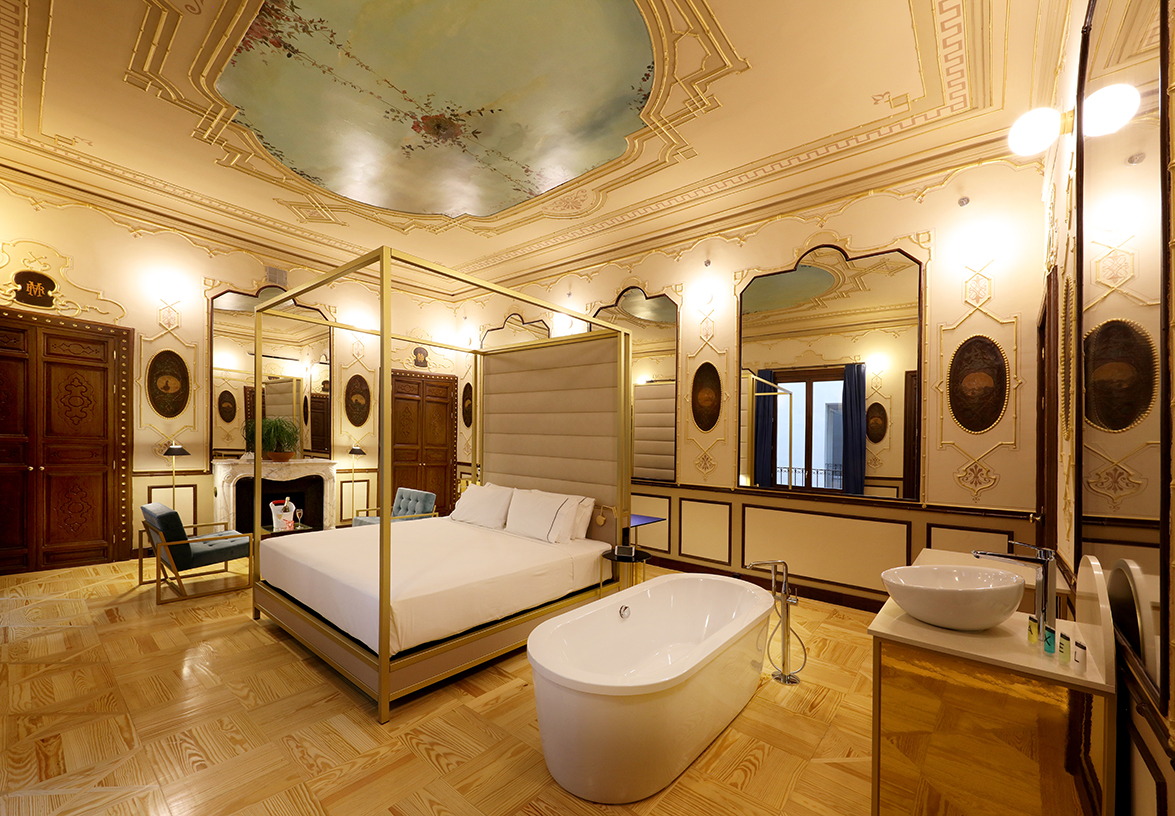 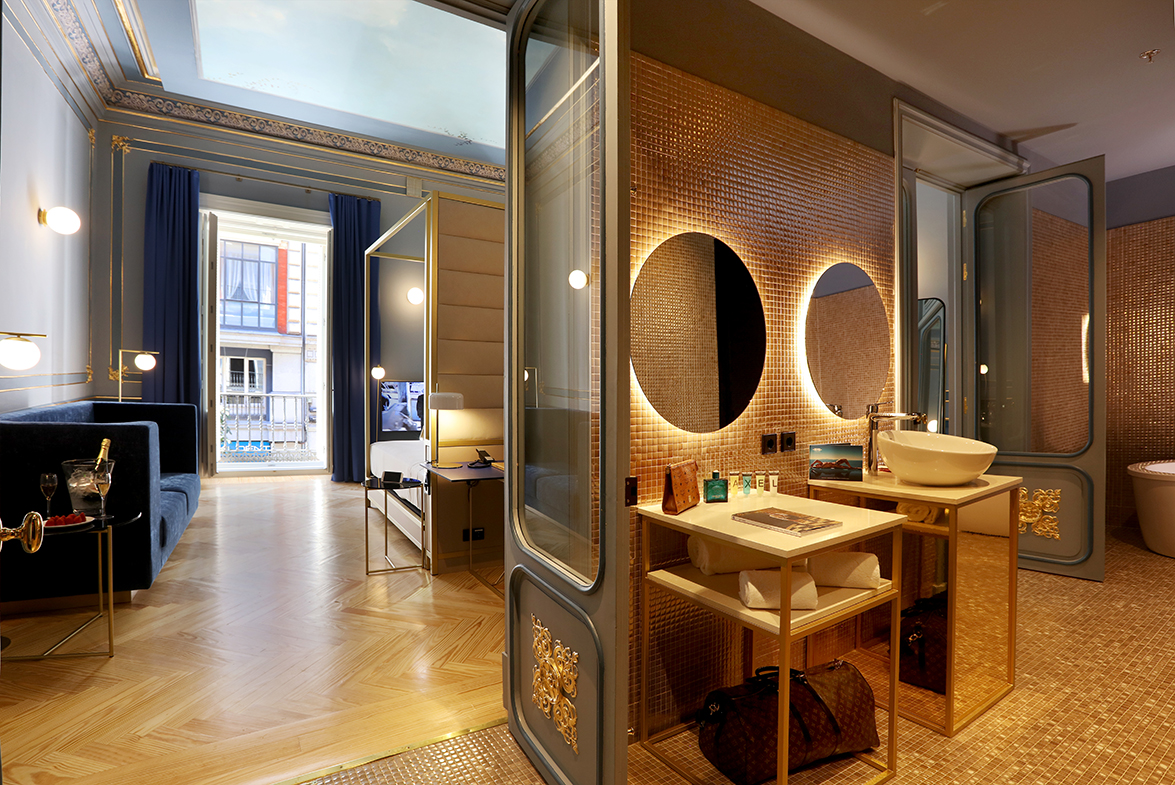 In the design of the rooms once again there is a mixture of some of the visual references previously mentioned, but with the new objective of creating a space which invites one to both rest and play.

The design mixes visual references to the esthetic of the bull fight and the “mantilla” with a sexy touch. Two large curtains are the outstanding decorative elements, one fuchsia, the color of the bullfighter's cape, and the other of a translucent black texture like a “mantilla”. Together they surround the bed and allow the room to be transformed according to the time of day or, why not, the mood. A neon light with clear or suggestive messages regarding popular culture completes this playful setting.

For those who are looking for a place to rest, thanks to its elegant intense blue and noble woods, the room offers a quiet and peaceful respite from the noisy “Literary Neighborhood”. 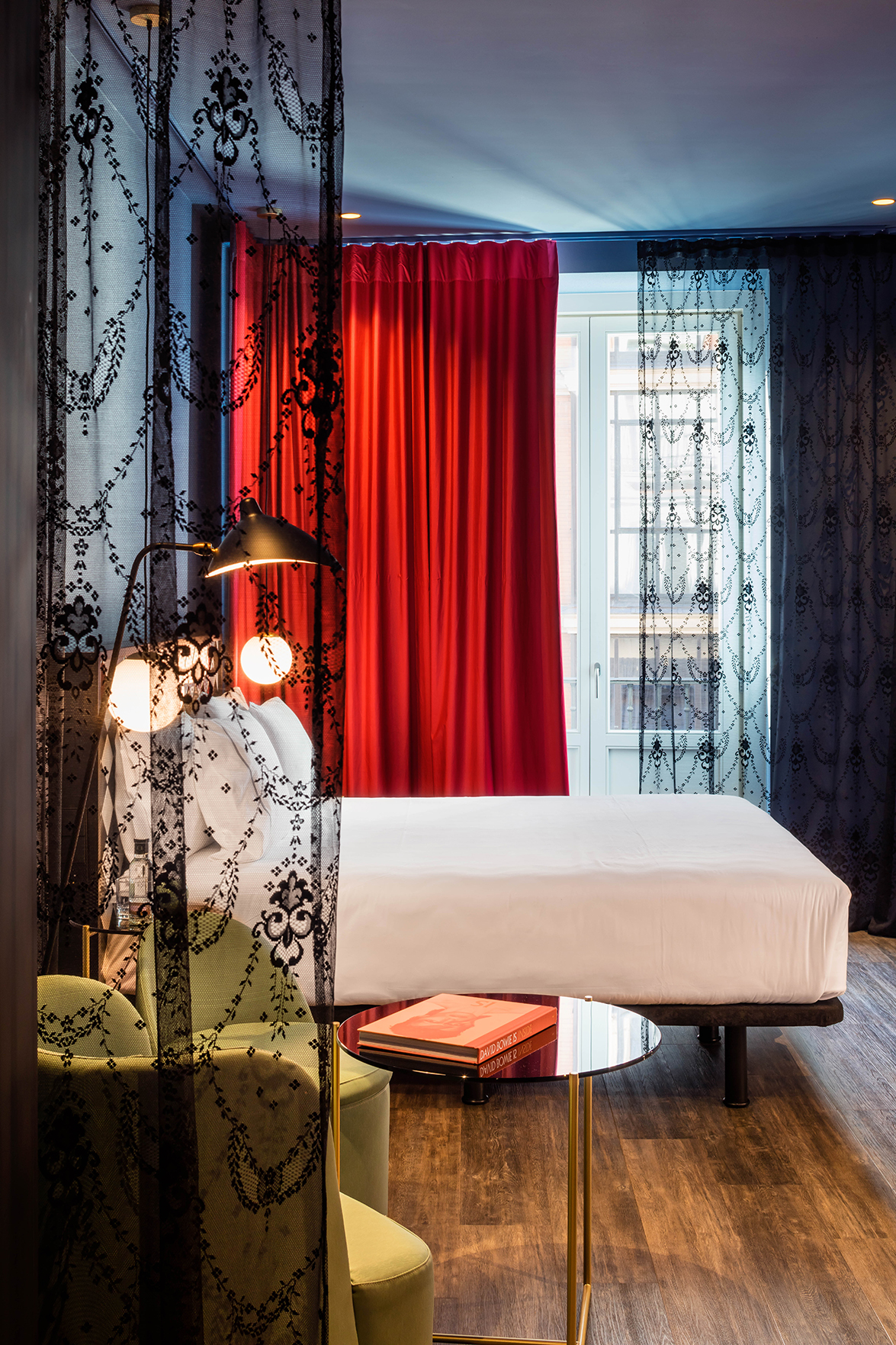 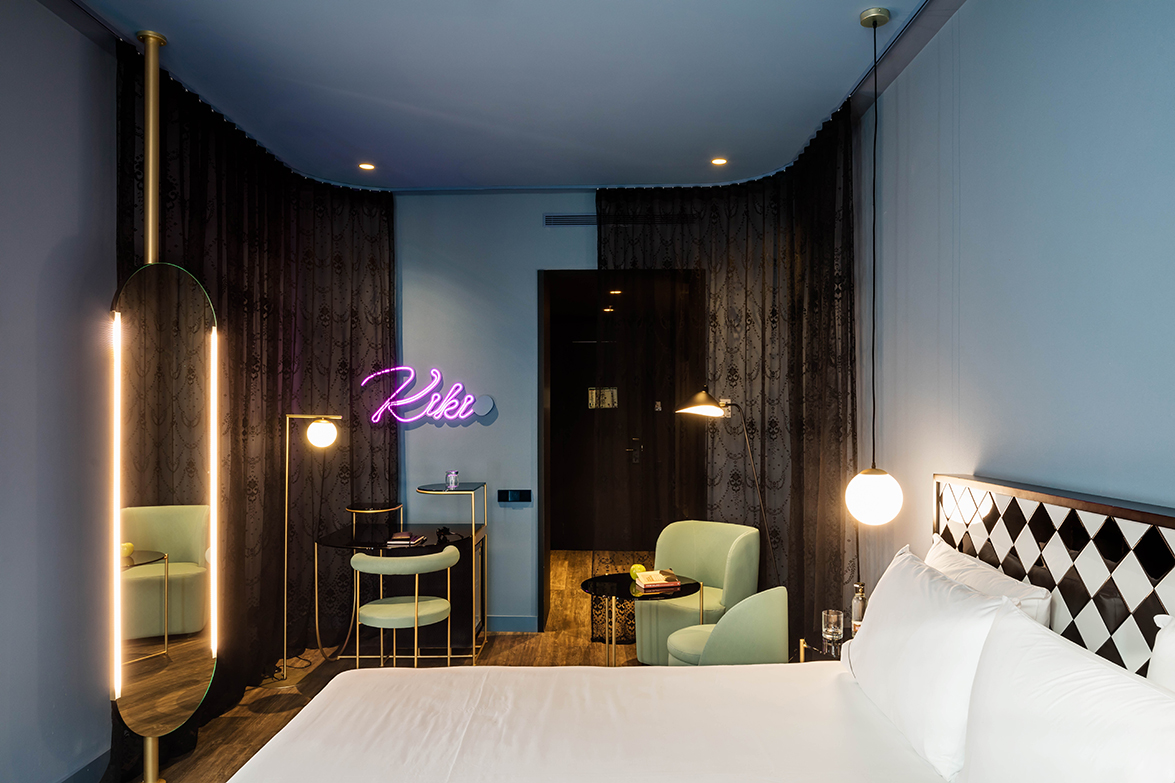 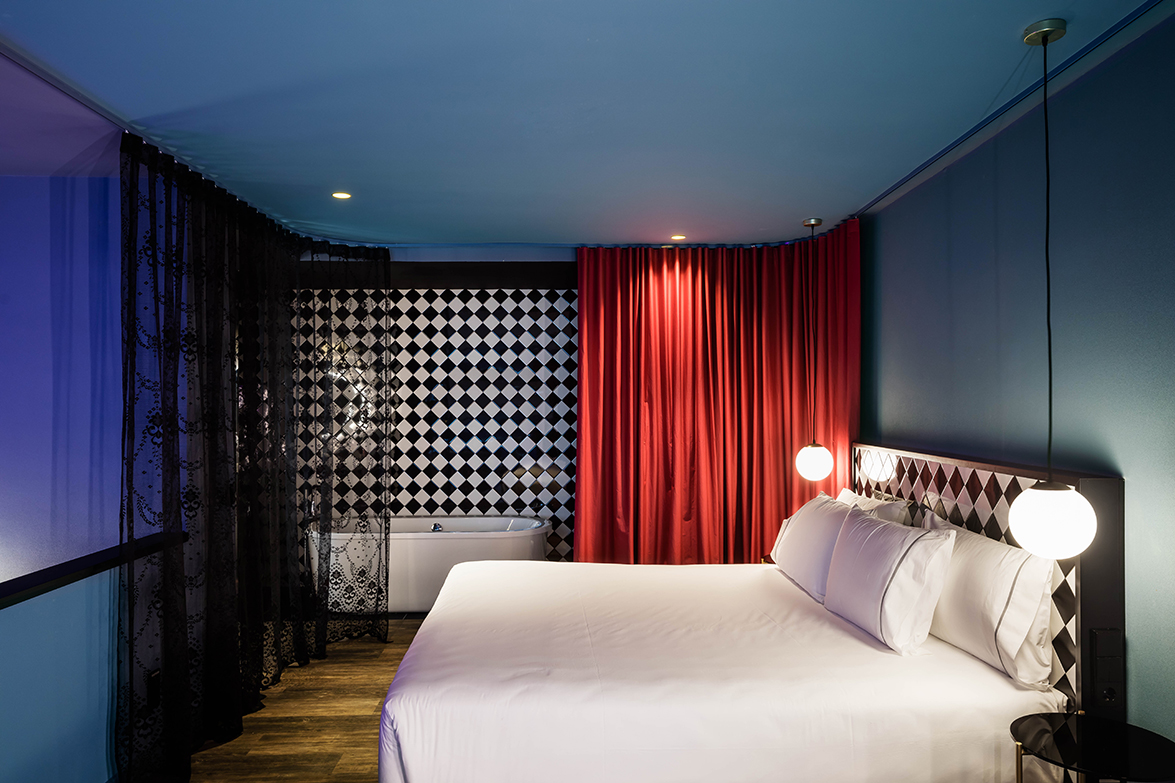 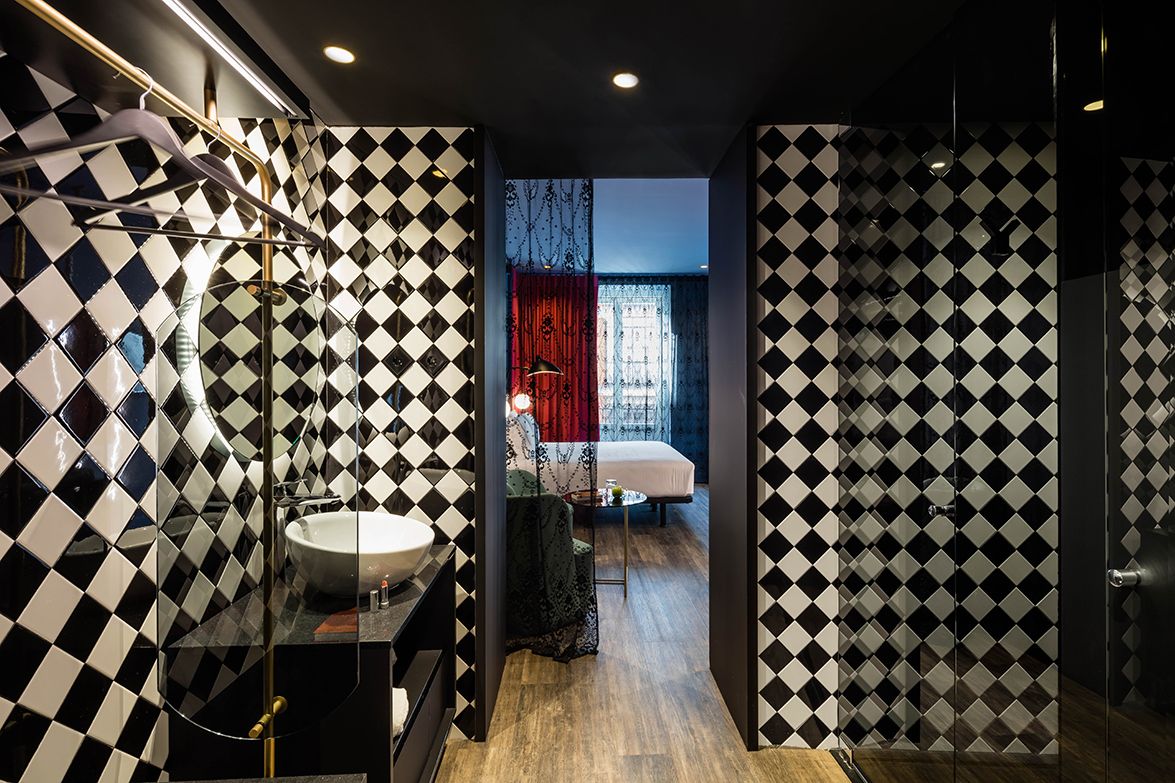