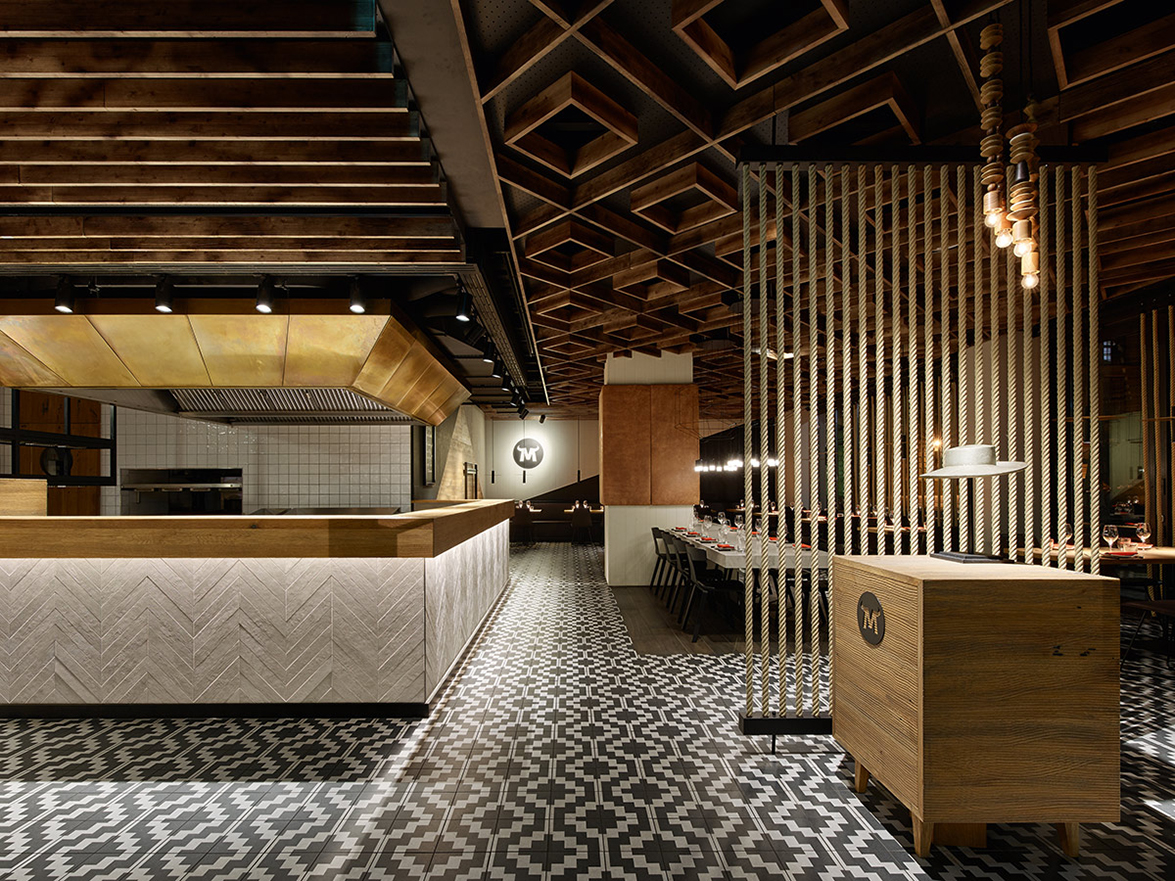 German steakhouse chain Maredo was founded in1978. With around 50 restaurants nationwide, it is Germany's market-leader in the steakhouse sector. To remain competitive and cash in on the prevailing steak and burger hype, Maredo opted for a radical interior makeover and profile enhancement, and Ippolito Fletiz Group was responsible for carrying it out.


The restaurant chain is all about top quality. An important part of this promise is offering exceptionally high-quality meat, which Maredo sources straight from South America. Ippolito Fleitz Group has put together a new interior concept that focuses on this key product and its origins, transforming quality into something much more tangible. 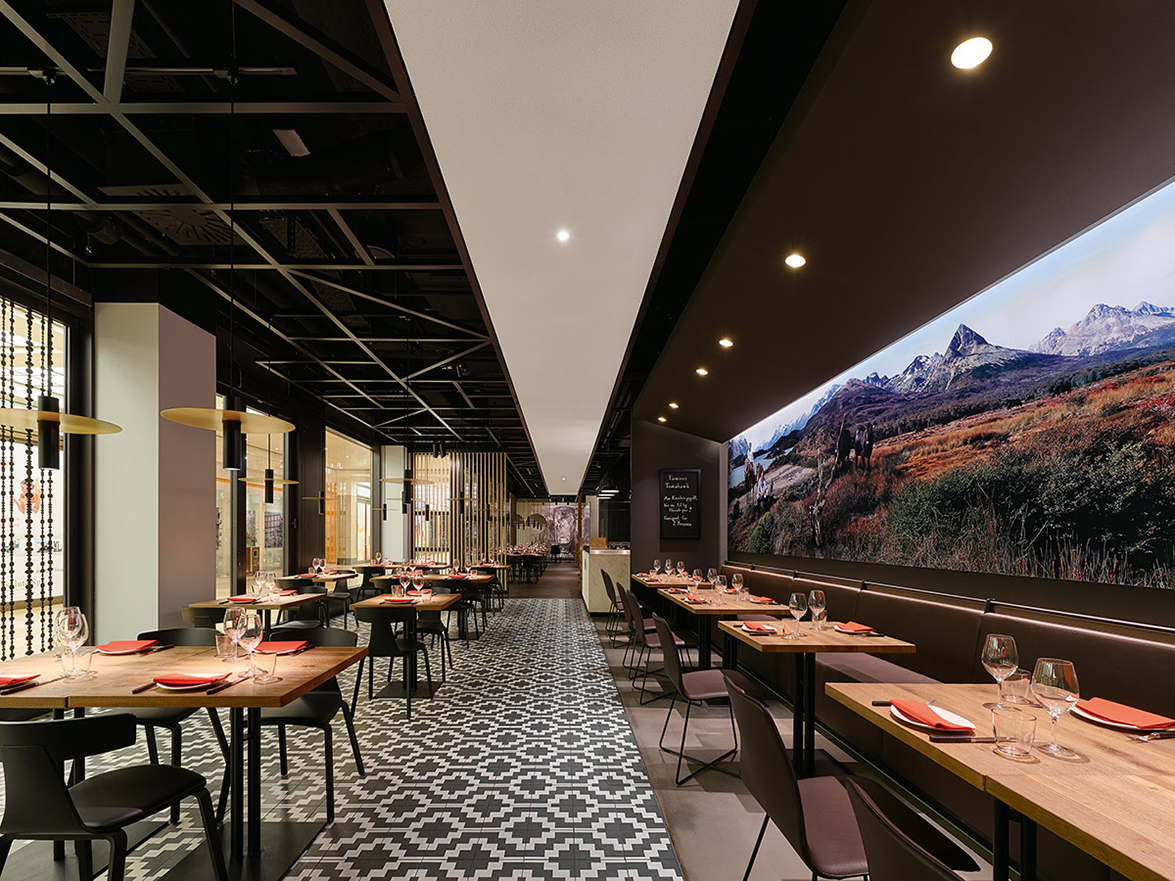 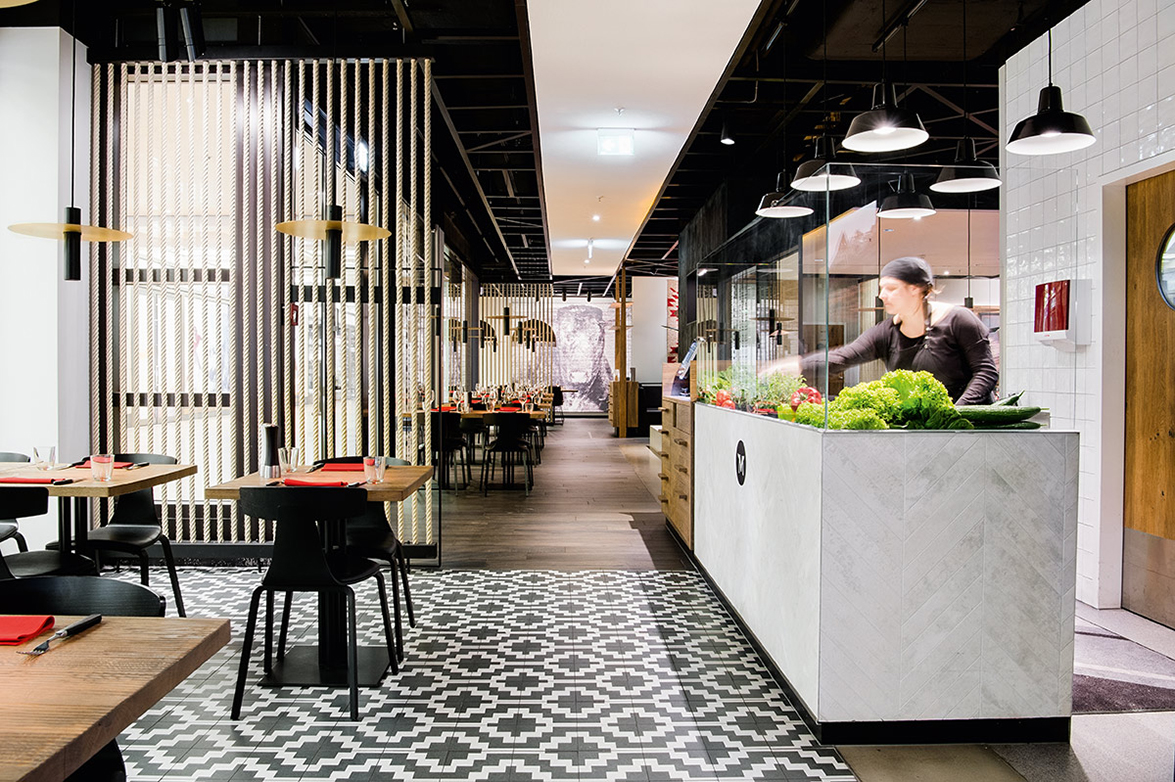 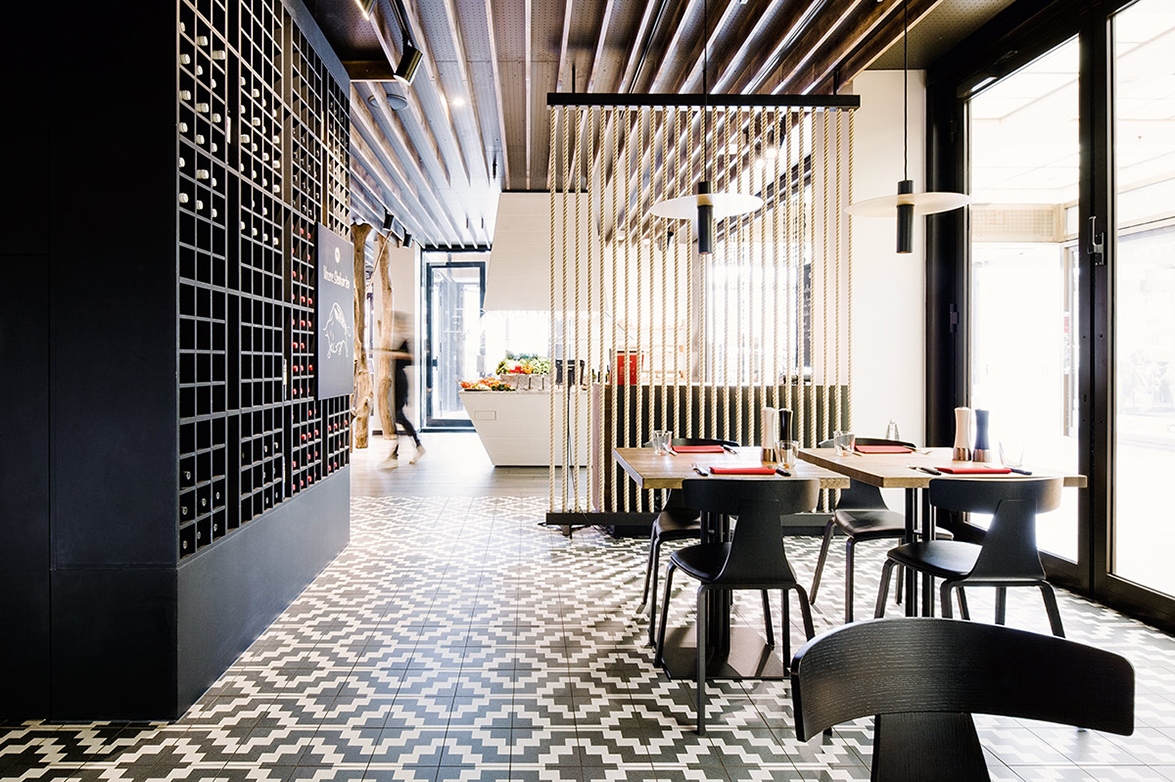 The new materials and colour world is inspired by the raw material meat with its archaic connotations and intrinsic connection to fire. Its origins are condensed into the figure of the gaucho:the archetypal South American herdsmen. The essence of the gaucho is freedom, independence, a closeness to nature and a life lived on endless plains - and thus beef in its original, natural, unadulterated quality. The traditional gaucho poncho with its woven geometric pattern inspires the spatial elements that are formed from diamond and zigzag shapes and give the Corporate Architecture its high recognition value.


It can be found in the floor tiles that were specially designed for Maredo, in the wallpaper on the walls, in the structure of the counter fronts and in the open, coffered wood ceiling.


The materials world is characterised by living, natural surfaces such as wood and leather. Tree trunks and ropes, deployed as filter elements to zone the large space, and the traditional cast-iron barbecue grill are all references to the daily life and environment of the herdsman. Large-format photographs on the walls and bull horn and sombrero-shaped lights continue the spatial concept into the smallest detail. 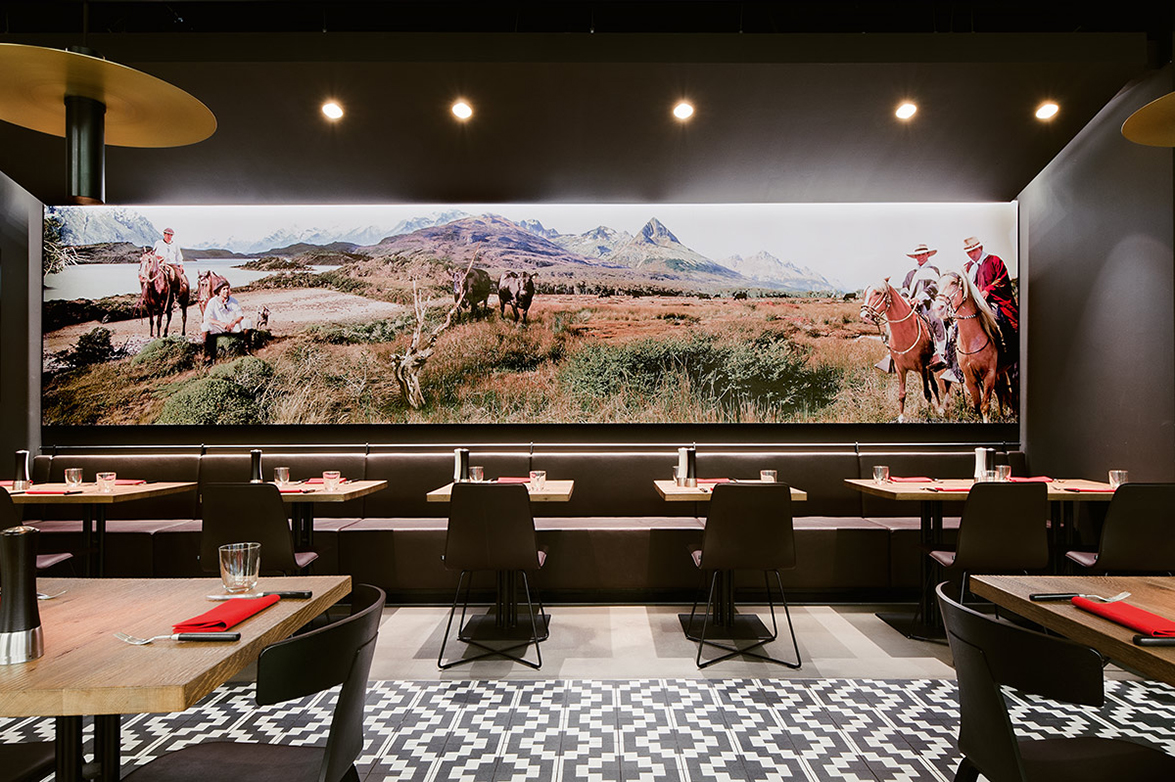 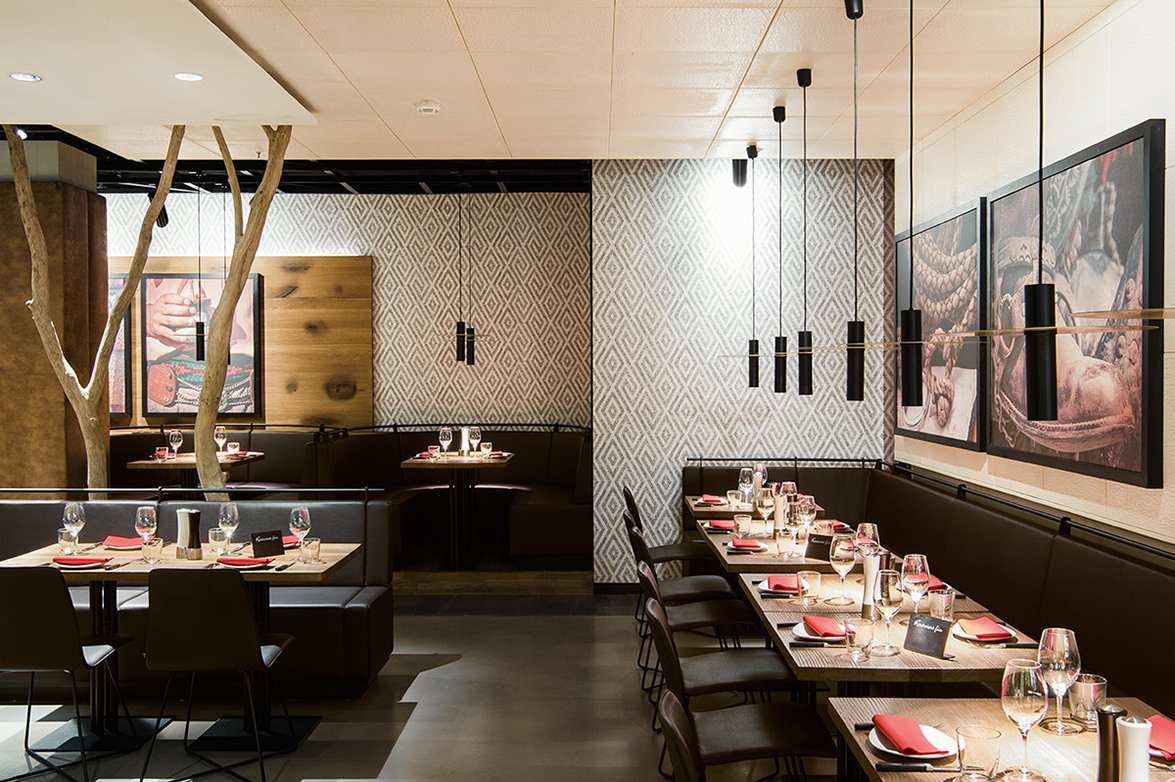 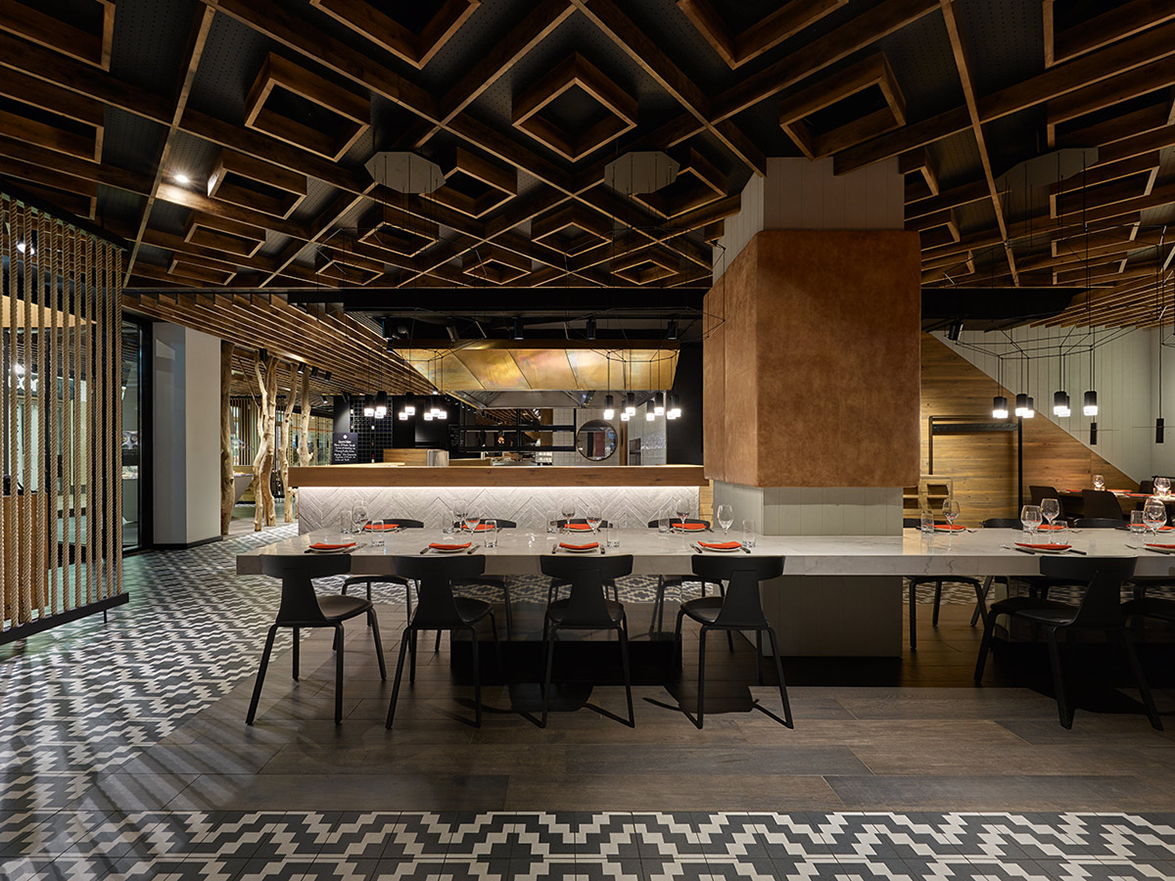 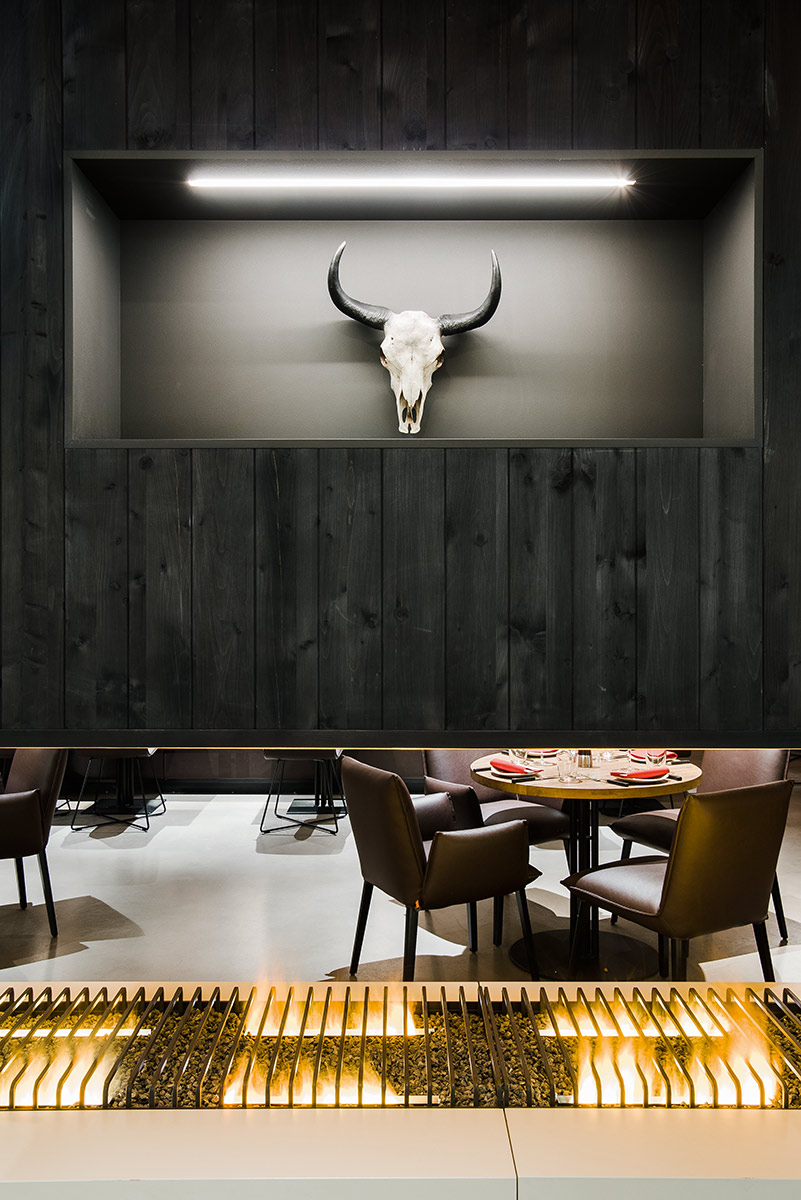 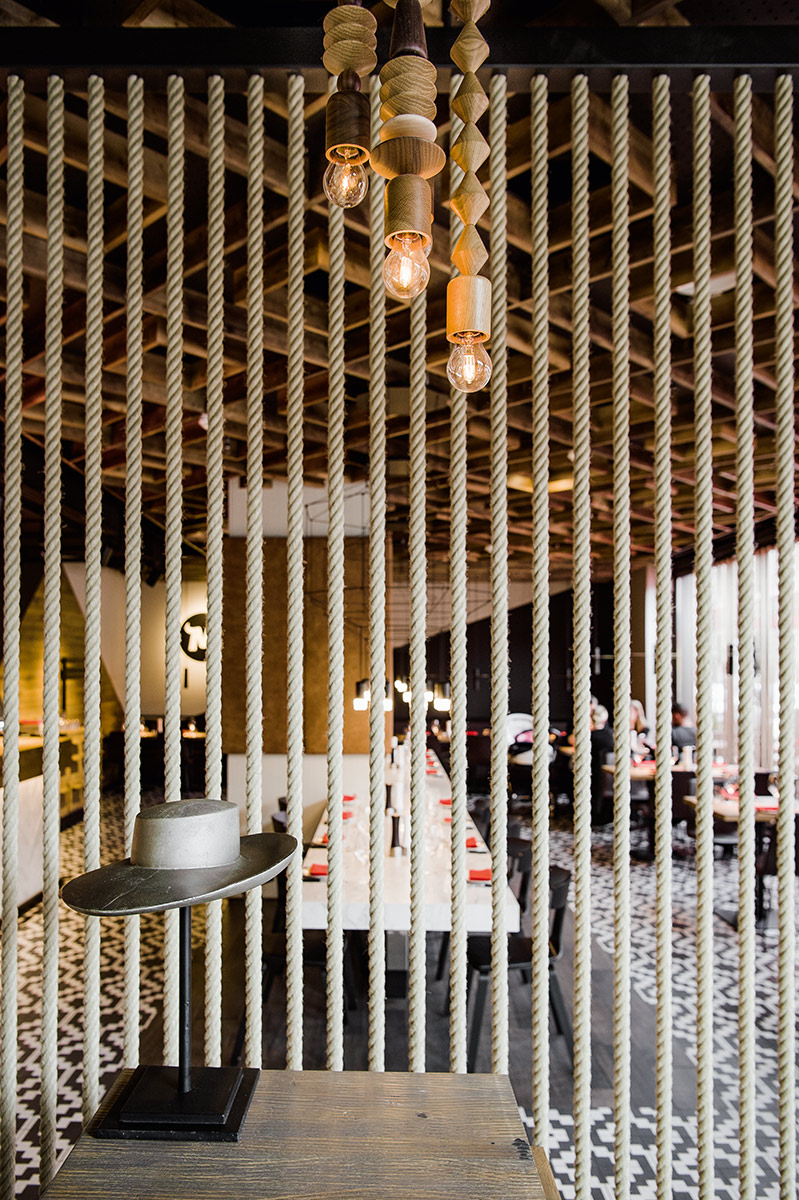 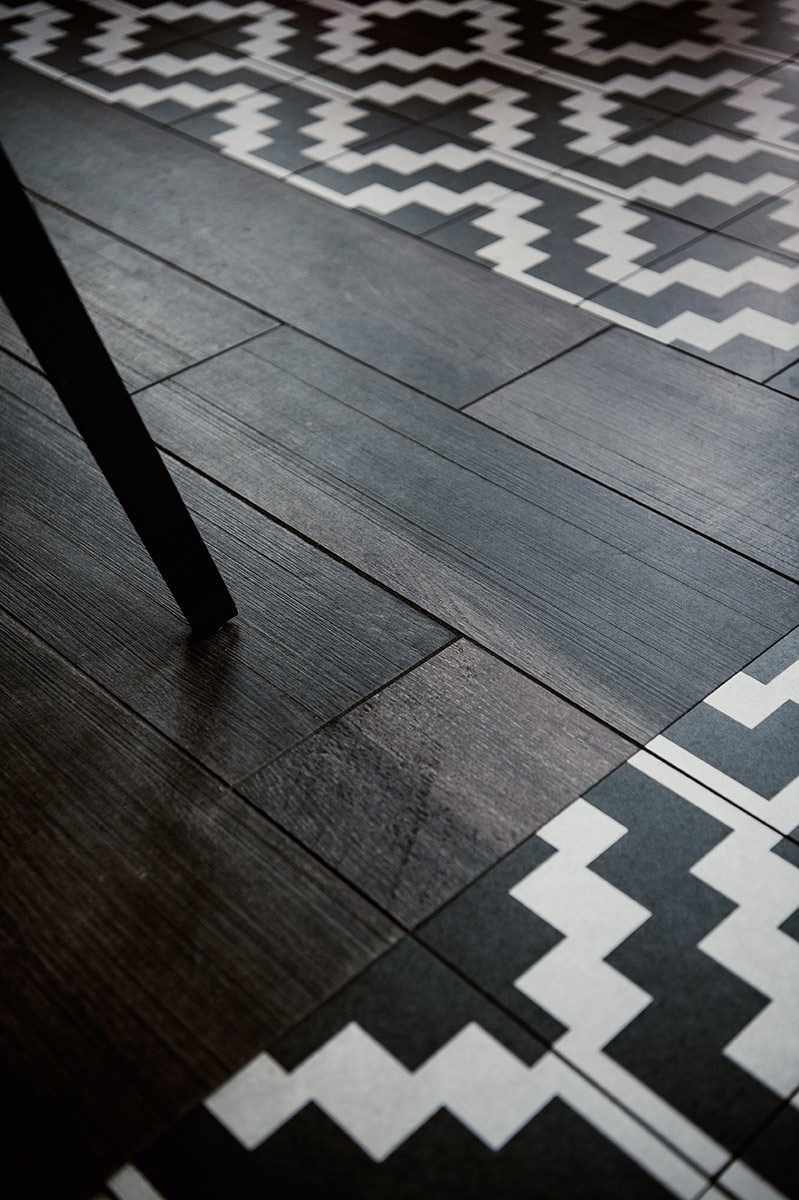 Immediately adjacent to the entrance is a barbecue area with an open fire, which letsguests dive straight into anarchaic ambience while whetting the appetite for grilled meat. The counter that is illuminated from beneath and a brass-clad hood give the generous barbecue area a qualitative and earthy feel, as well as functioning as the spatial translation of the Maredo quality promise concerning steak and its preparation. 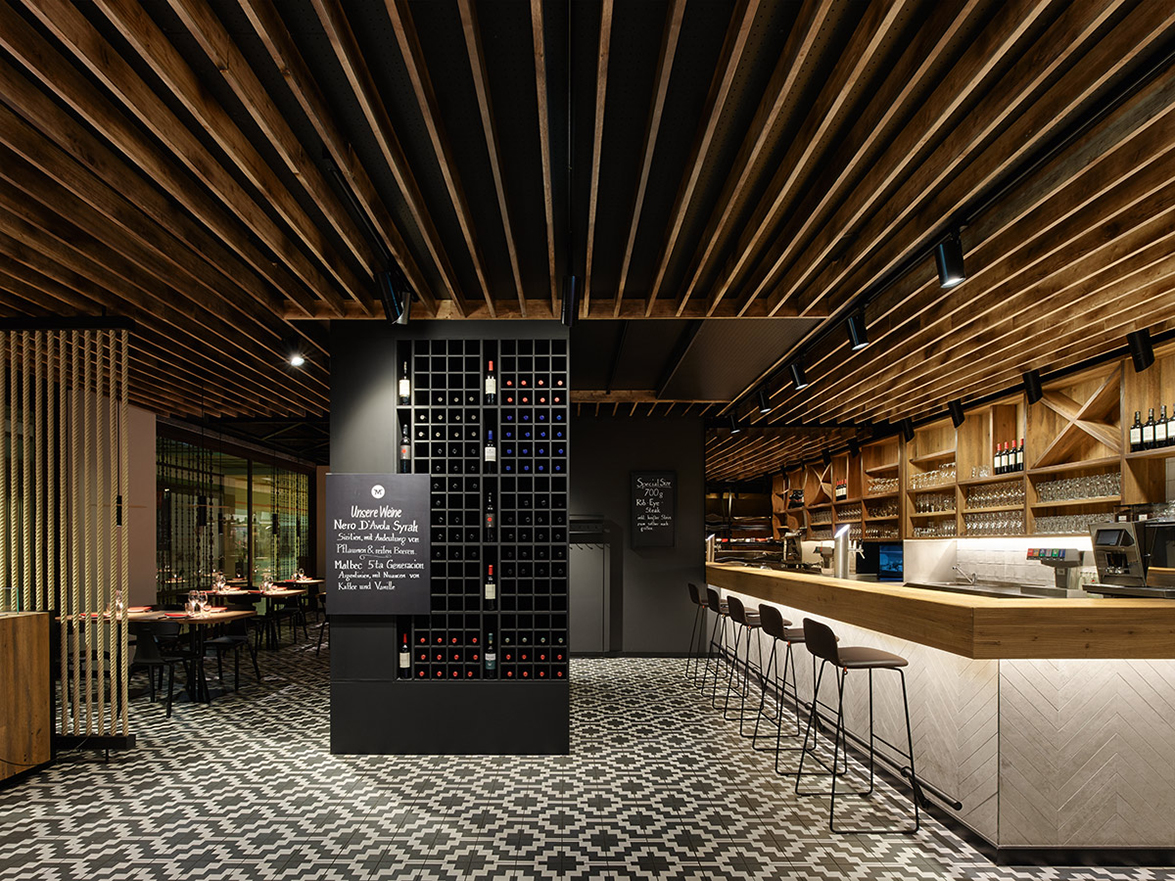 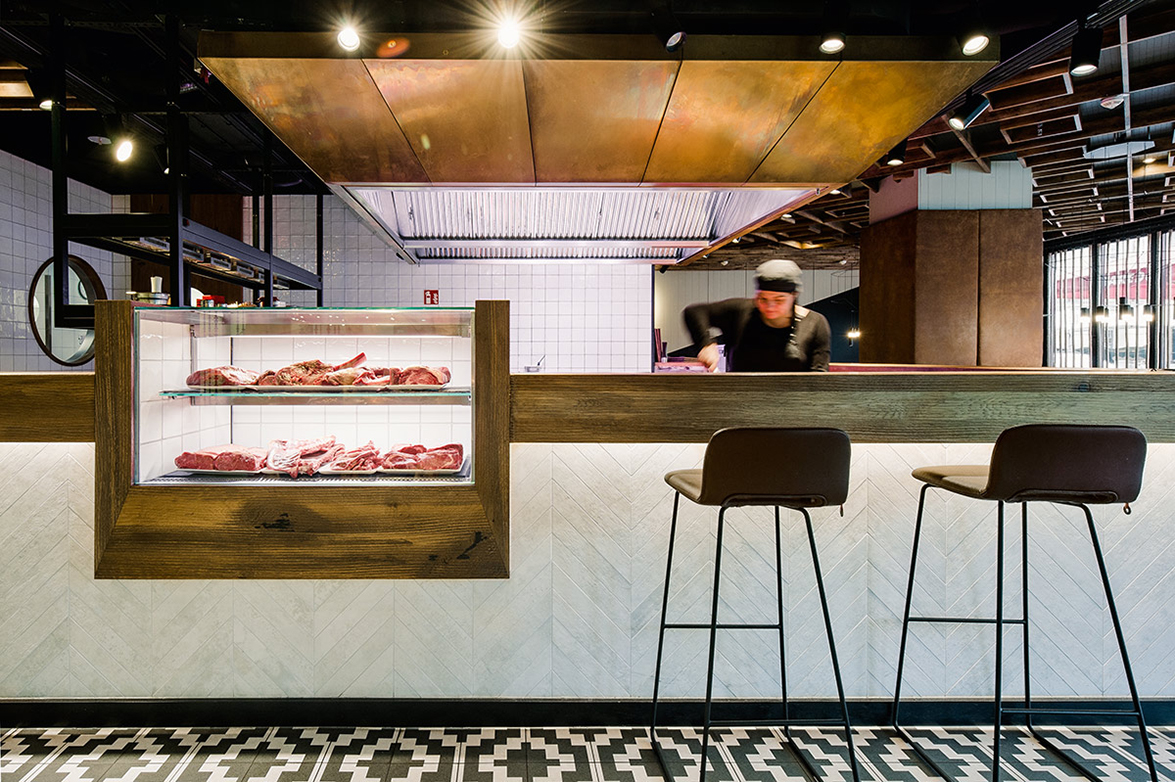 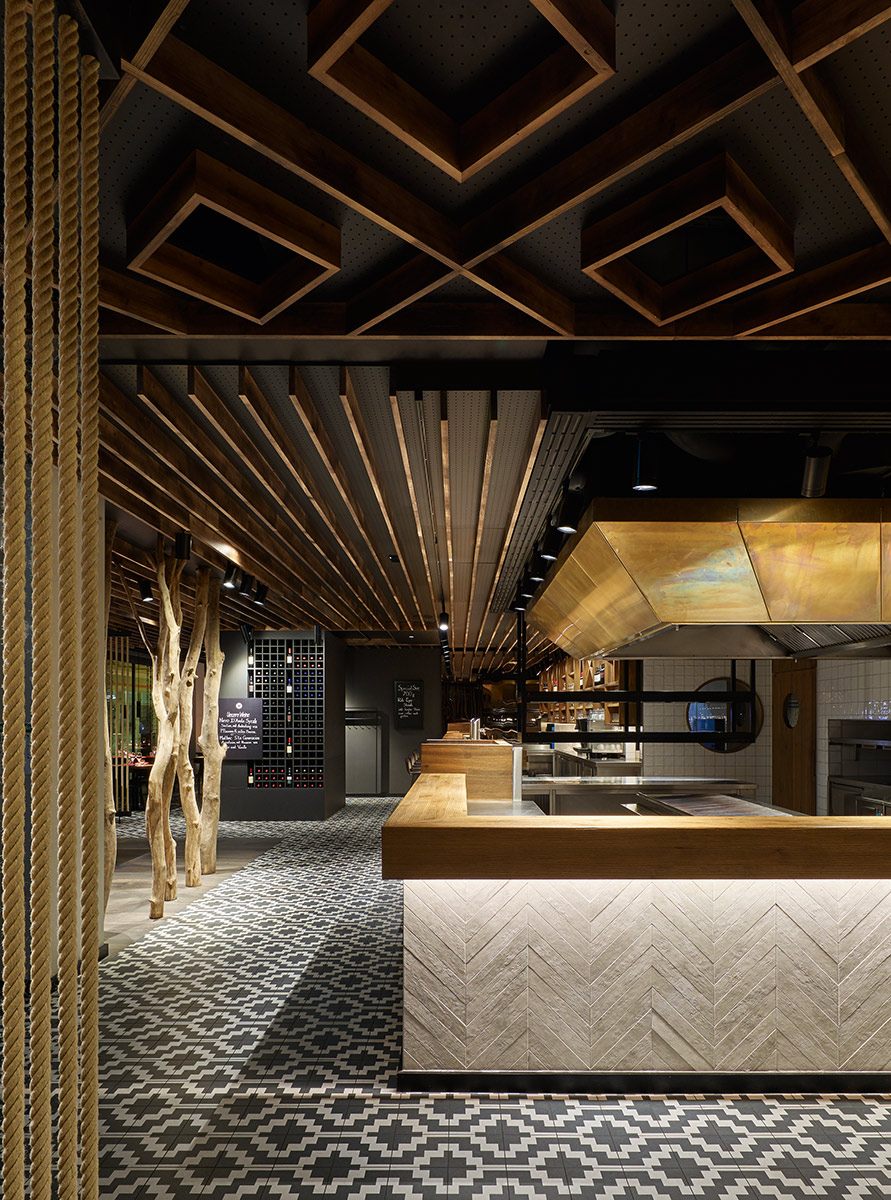 Opposite this area is a salad bar with a fresh and light appearance, which enters into a dialogue of opposites with the archaic nature of the charcoal fire. A long, open fire runs through the seating area furthest removed from the barbecue area at the very rear of the dining room, thereby guaranteeing a cosy, fireside atmosphere throughout the space. 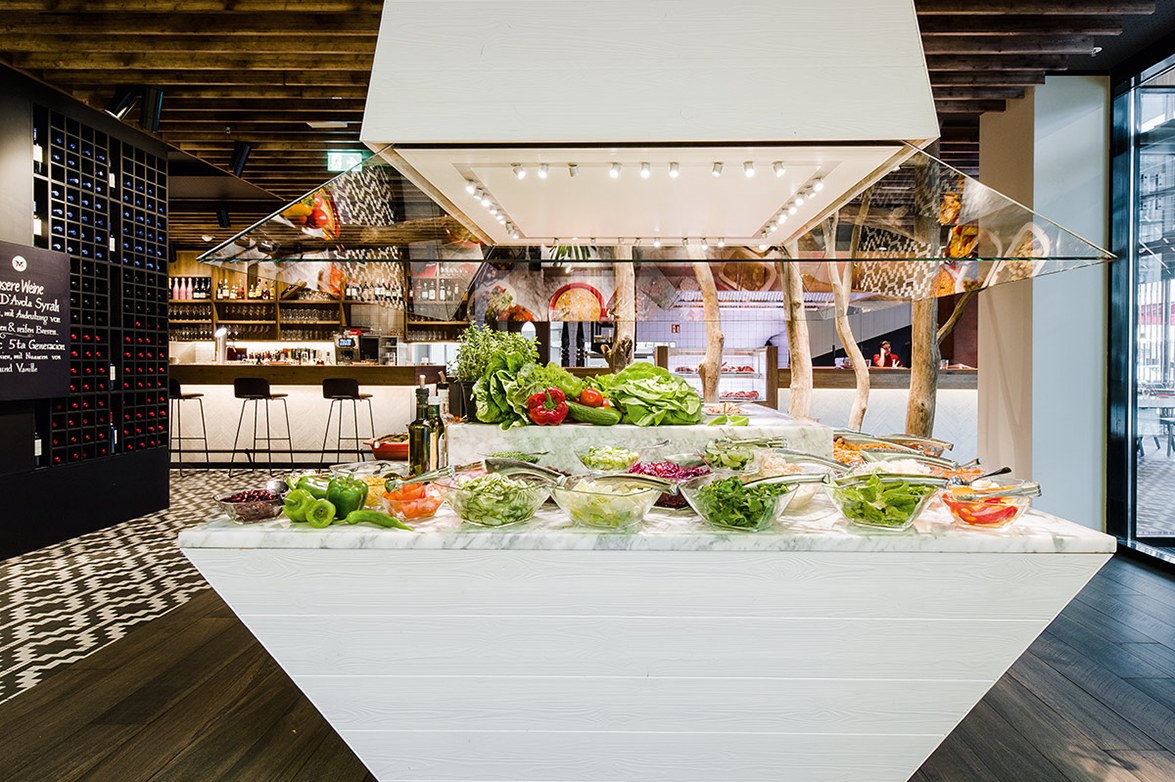 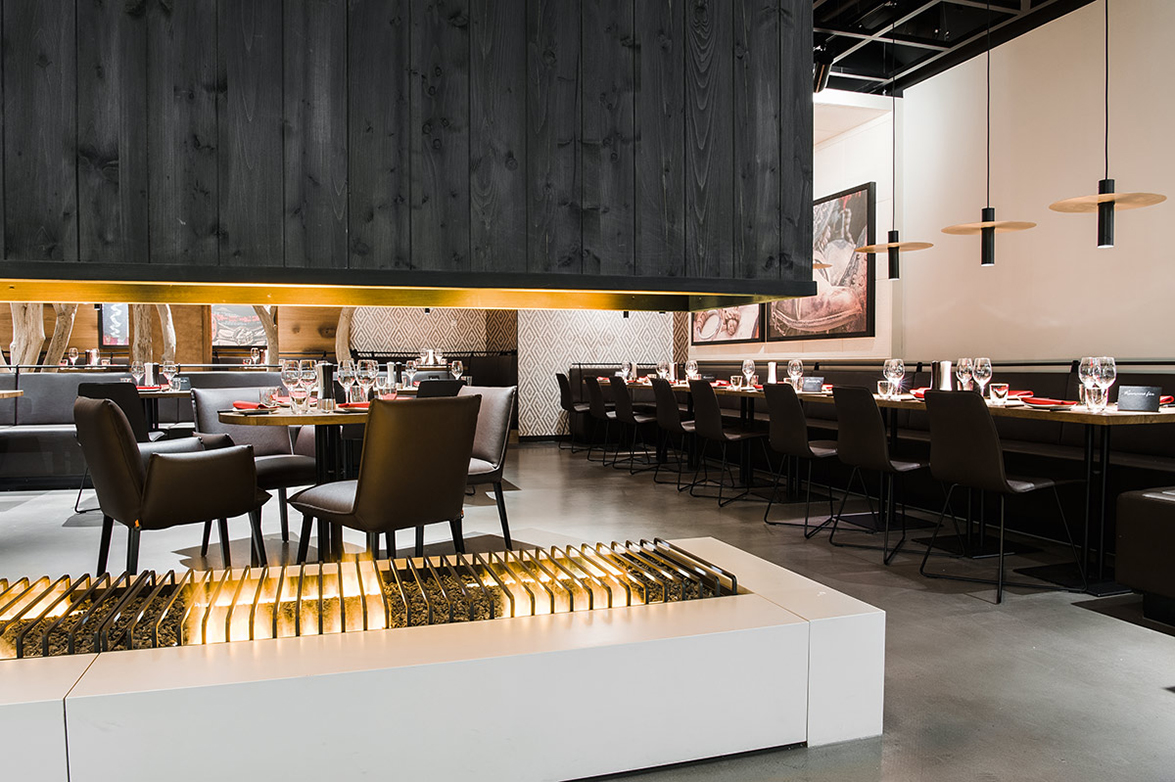 A balanced range of seating options- from a long, floating, marble table that can seat a good dozen people to more enclosed leather-upholstered berths in the rear areas of the restaurant - offers a variety of dining qualities, thus catering to guests’ differing gastronomic desires. 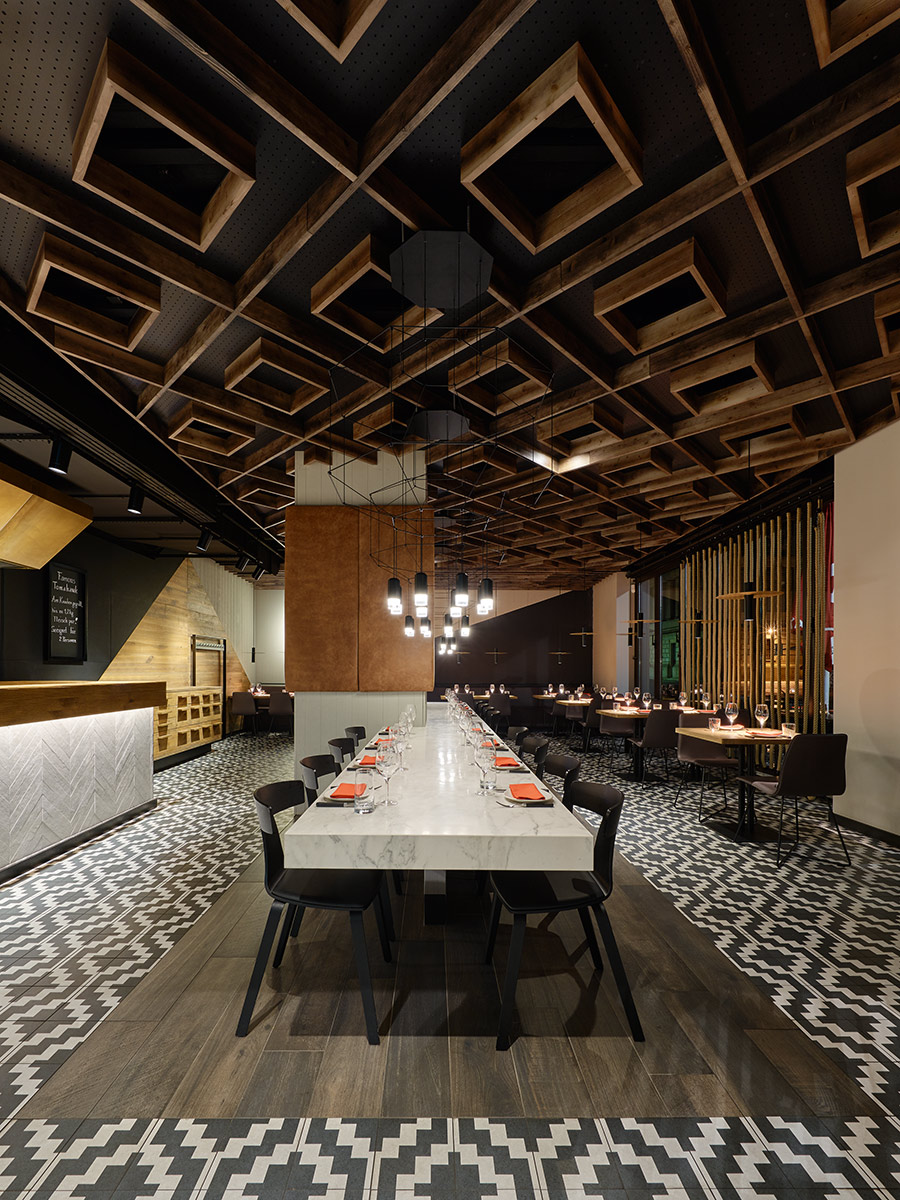 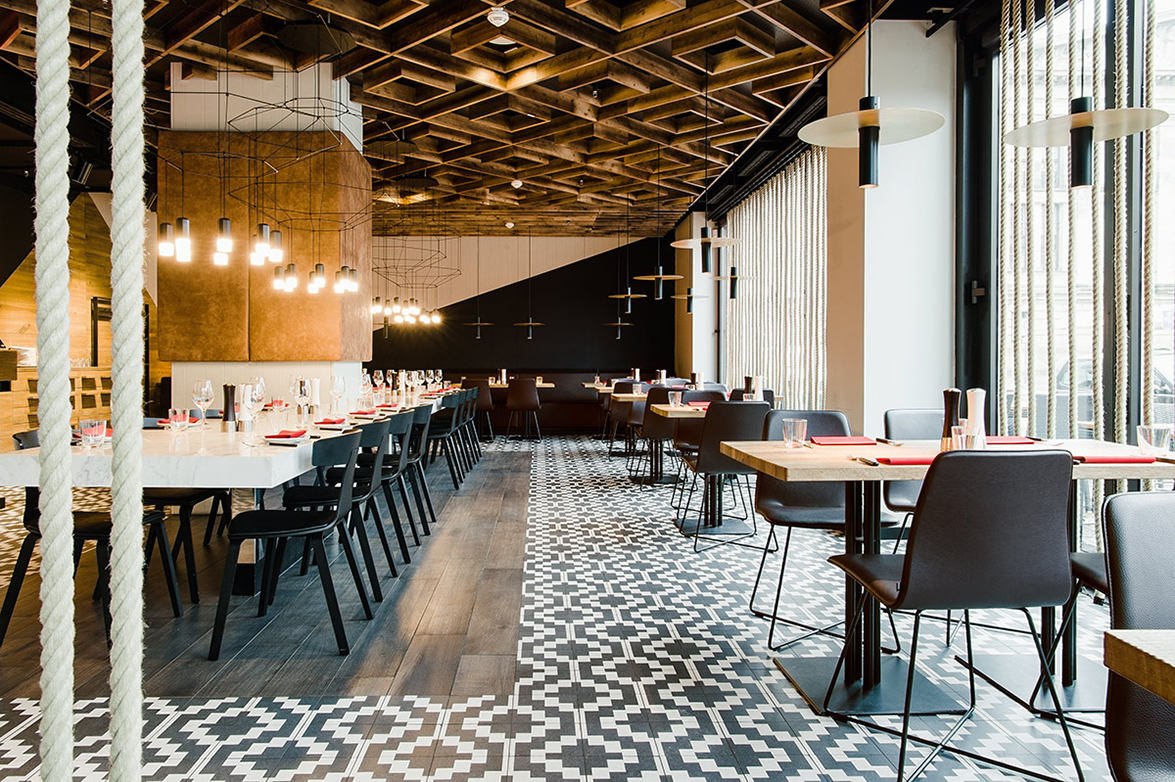 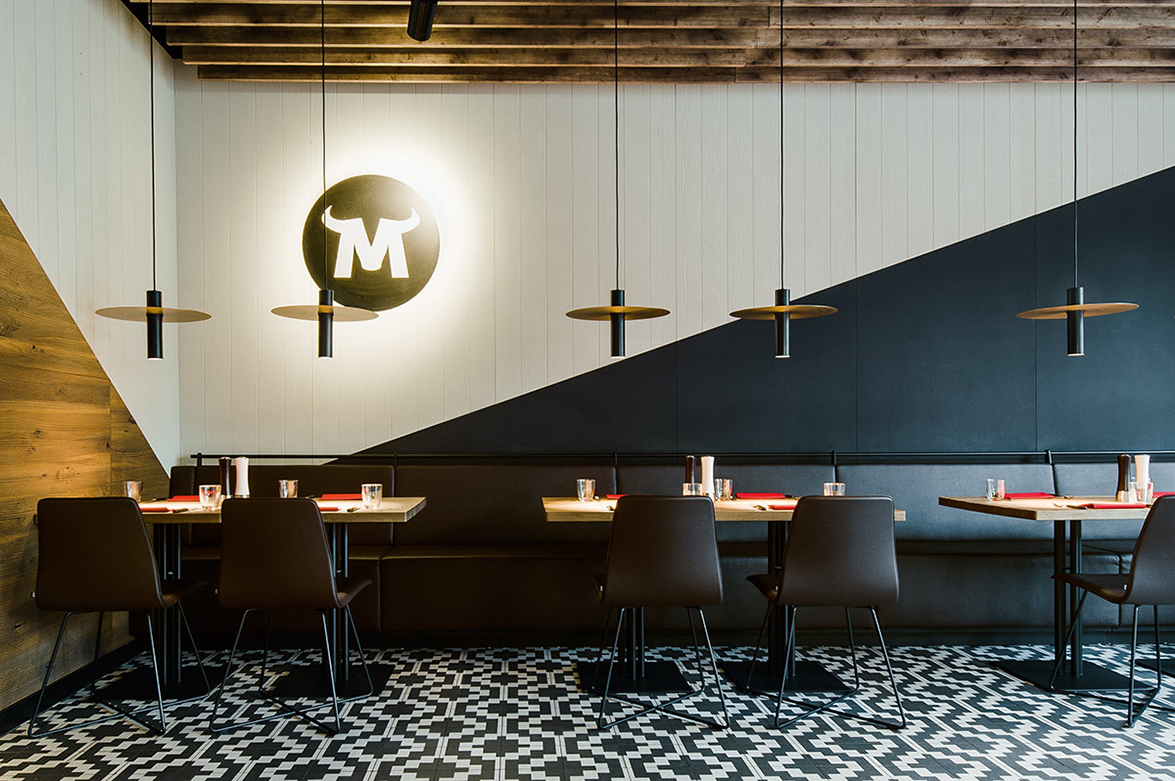 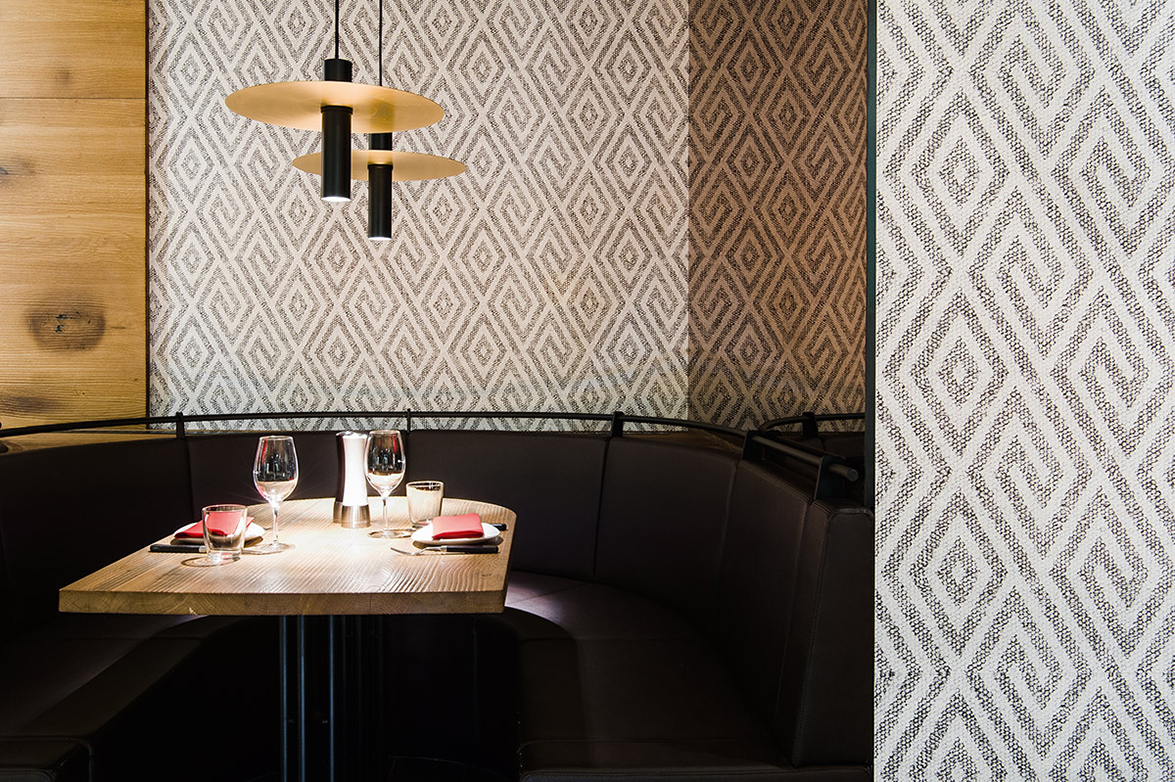 Even the WC facilities have not been forgotten: with specially designed washbasins of raw, galvanised steel in the shape of a cattle trough and brightred WC partition walls. 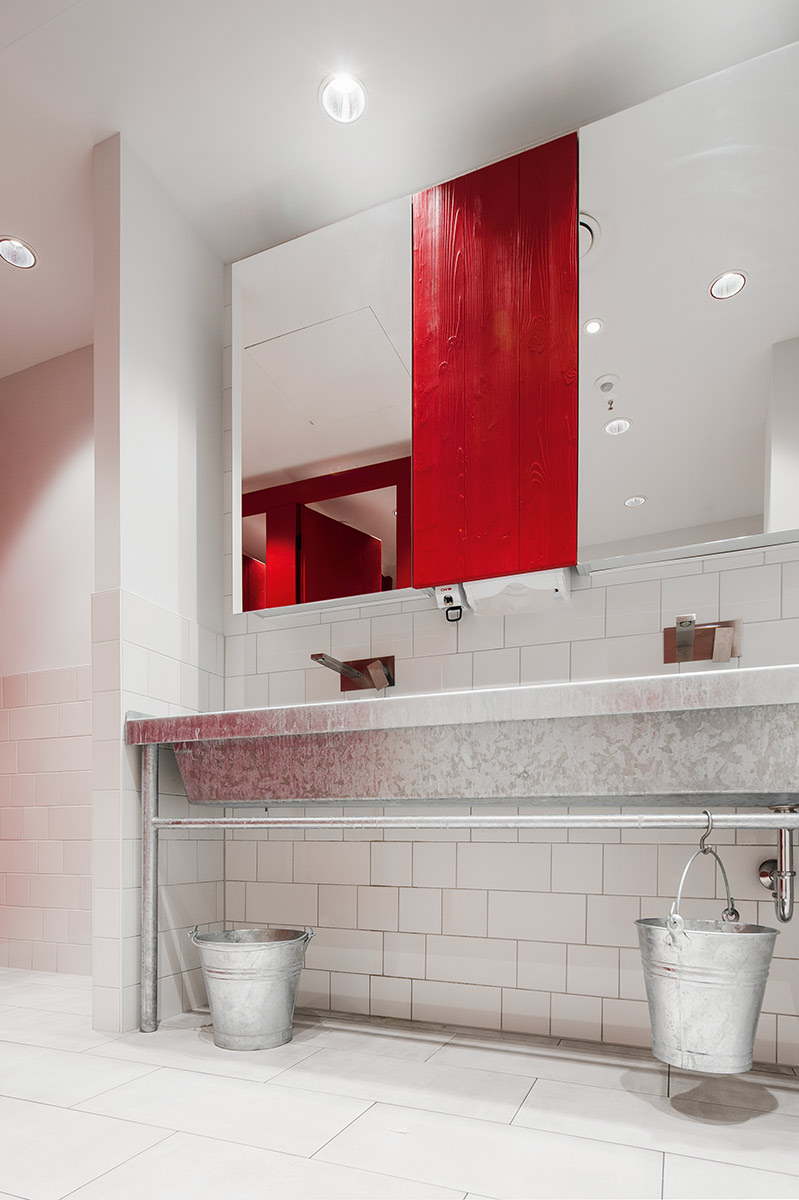 The new spatial concept has been implemented for the first time in the Berlin branch in ‘The Q’ mall, next to Berlin's historic Gendarmenmarkt. The existing restaurant has been expanded to encompass a former post office branch next door, giving the new flagship restaurant almost 580 m² of floor space.


Ippolito Fleitz Group employs a consistent design world for Maredo that centres on the South American gauchoto describe the core competences of the brand. Its visual and haptic implementation provide fresh ingredients for the brand's new positioning.