Sculpture, art and light are together in "Artwork", the most artistic facet of Arturo Alvarez 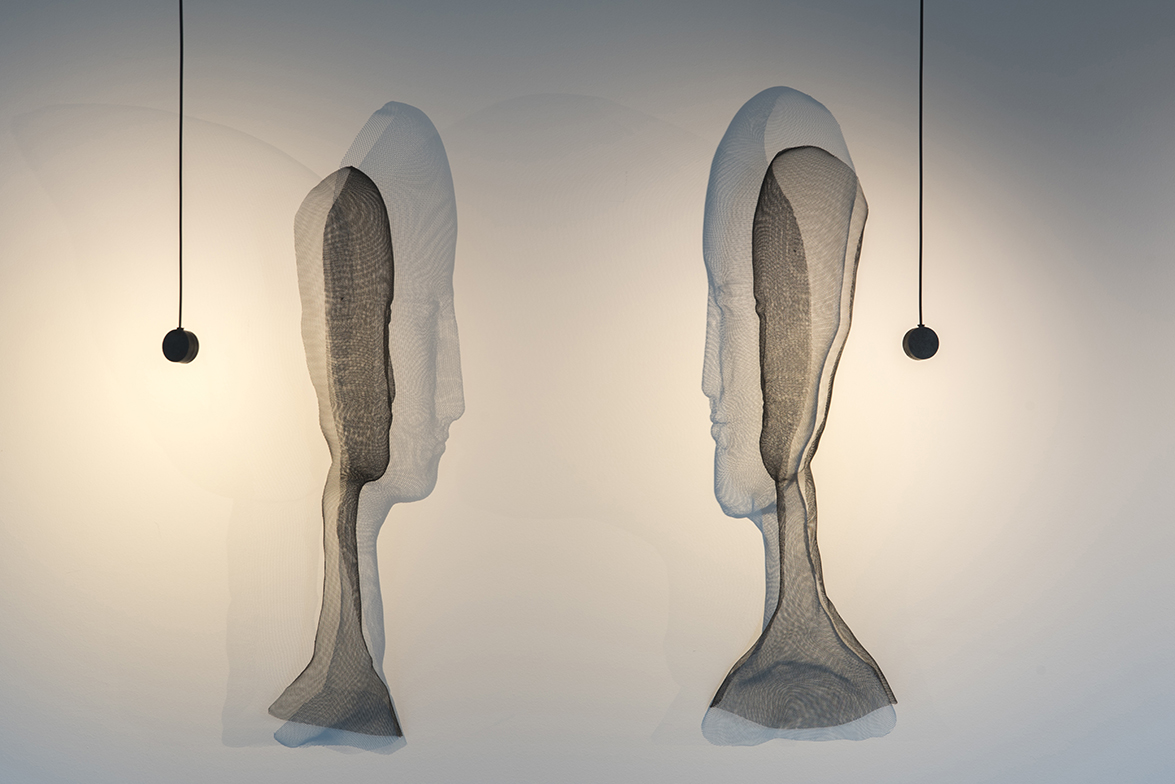 ARTWORK is a brand new expression zone designed for creative artist Arturo Álvarez who, twenty years into his career, has entered a much deeper exploration phase of human beings, their relationships with others and their surroundings, and where light acts as a backdrop. It is a much more private and personal design that brings us into deeper thought, way beyond aesthetics and into life's most transcendental elements. Next Friday, June 16, Arturo Álvarez inaugurates an exhibition at the Luisa Pita Art Gallery in Santiago de Compostela (Spain).


Conversas is an uncovered and open faces collection, with all their noticeable beauties and despairs and which get all of their dramatic appearance from the light that projects them onto the wall in 3D. When the lights move, the faces engage into silent and frightening confabulations among each other, which make us reflect on human beings, personal interrelation and how communications fluctuate with others.


Expressions, gestures and glances emerge from the chilly looking shaped steel chain mail... A spirit, bare and straightforward, seems to gaze at us in some cases while in others, it makes a face to hide the most intimate part of its being, or simply lays there with a confused look.


In all of the rooms, we can notice a certain homogeneity in shapes which causes discomfort and is quite disturbing; the styled necks and faces stretch boundlessly. And out of these newly found feelings, the light makes its appearance to detail and further reveal this inner being, whenever possible.


The casted shadow on the wall allows us to see every single movement, every wrinkle and the expressions coming out of each corner of their lips and glance. The bulks are projected in 3D, focusing on the most insignificant details of faces, cheeks, eyelids and gestures which each seem to have a story to share with us. The scene takes on a brutal turn when the light bulbs start moving, triggering shadow movements which in turn lead to a highly engaged conversation between spirits.


Being with others and being listened to is a human need. In the author's own words: “In the end, the only thing that's left are interpersonal relationships”. 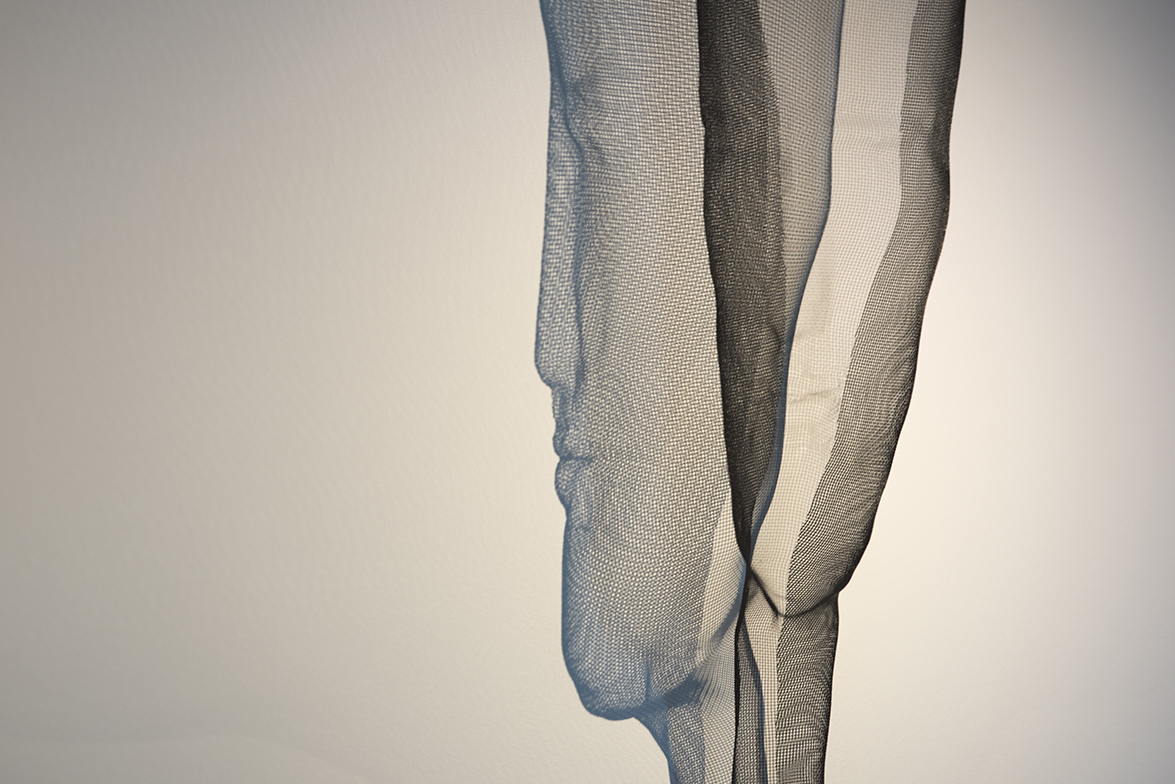 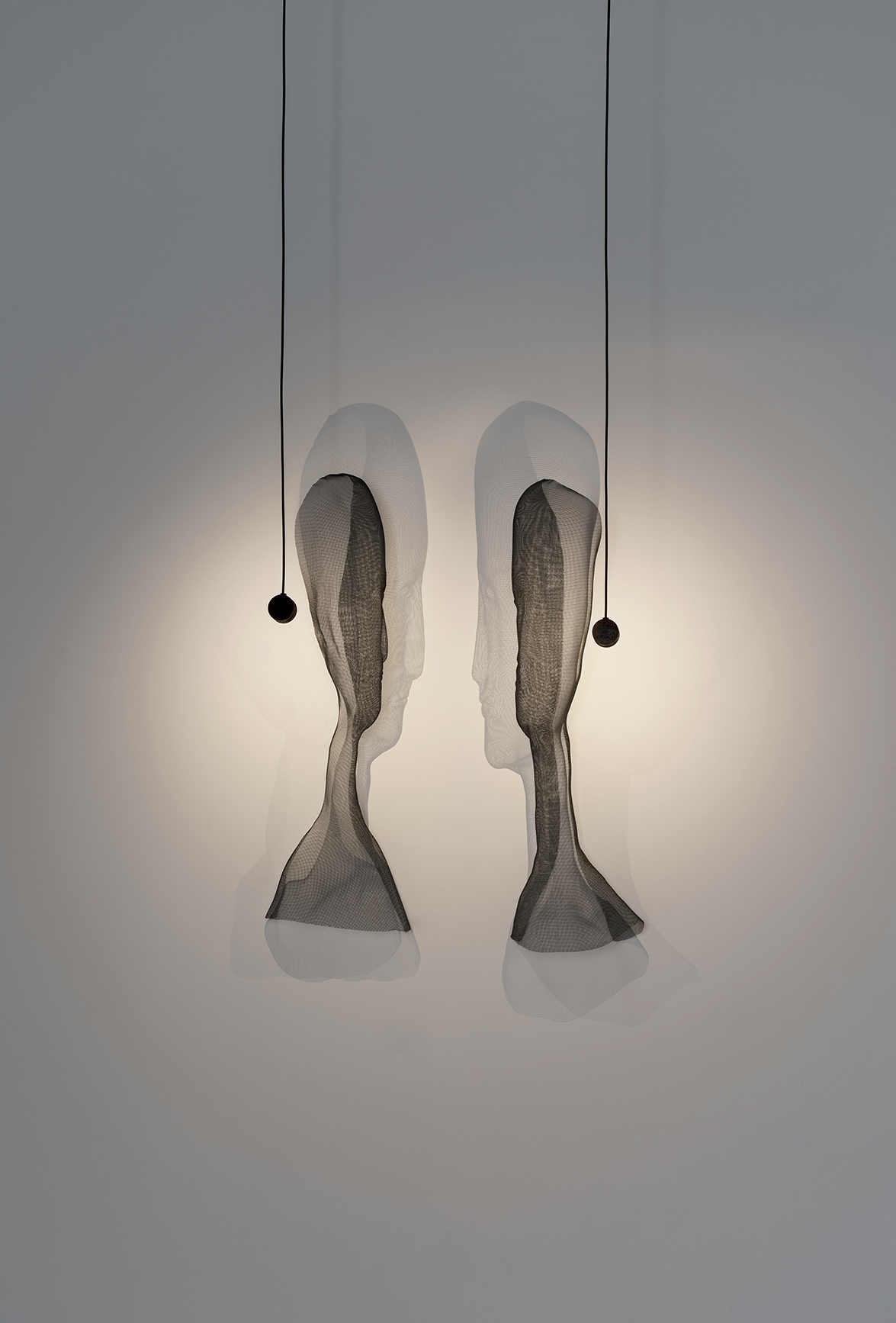 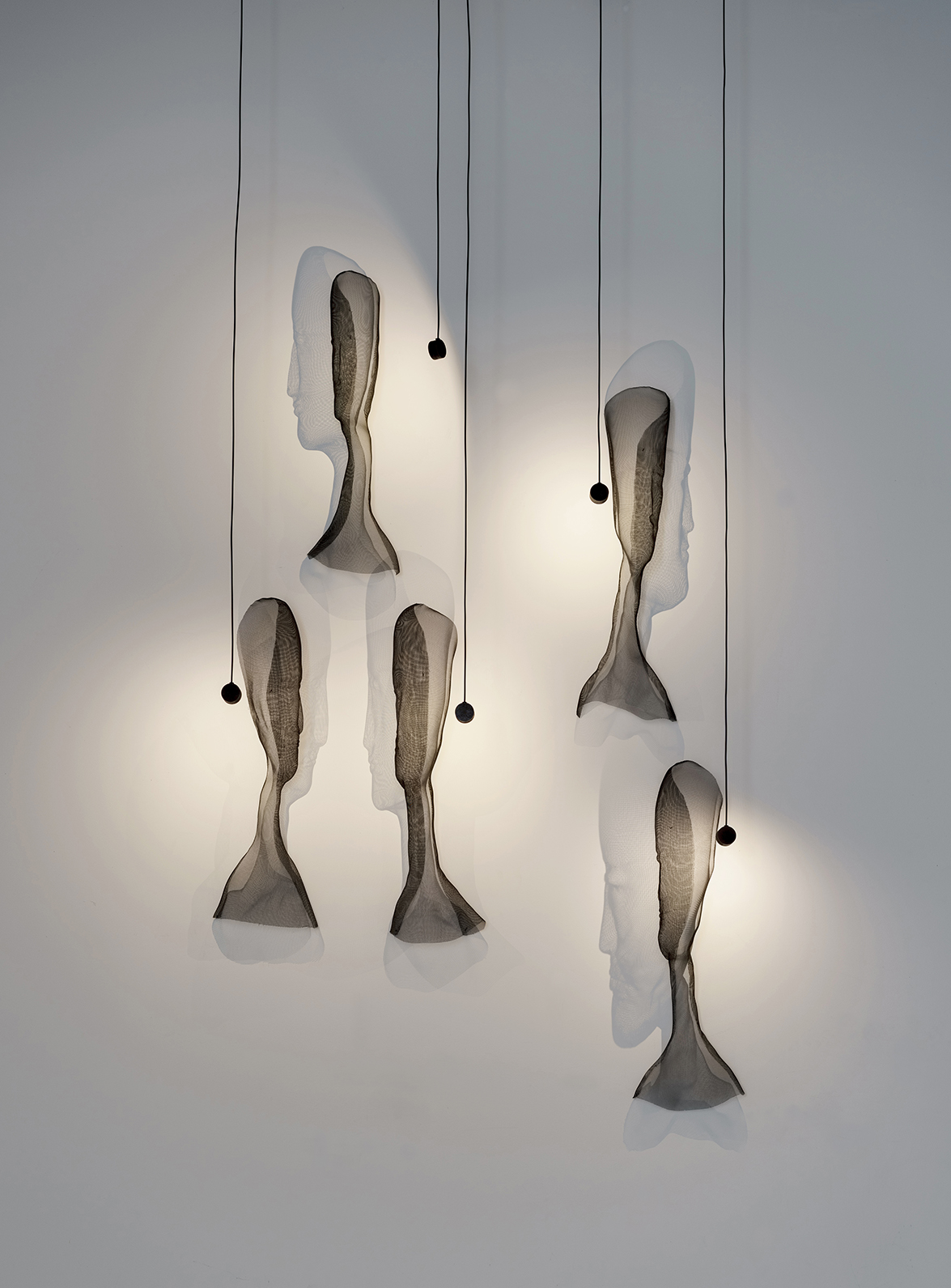 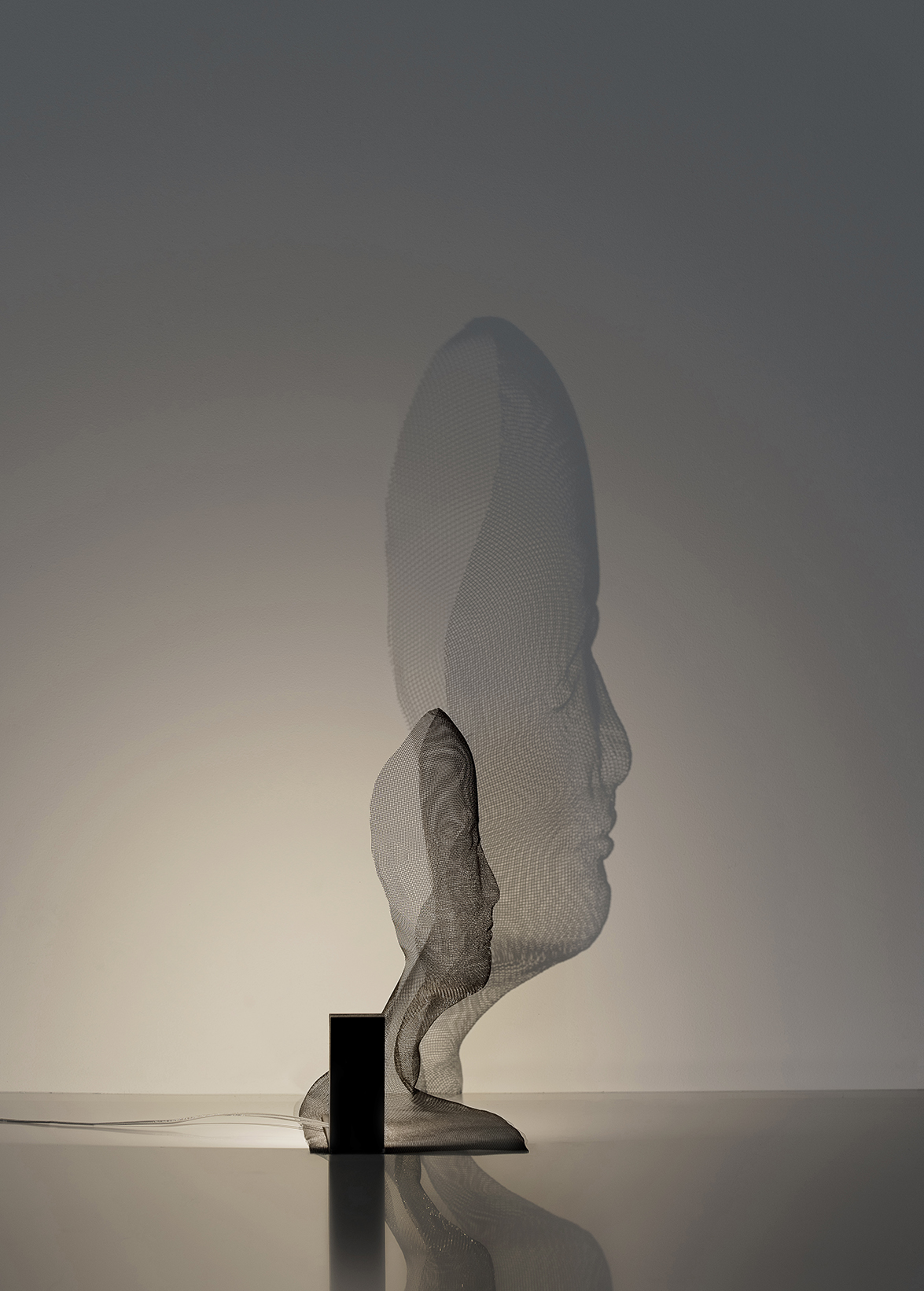 
The individual confronting himself and the complex relationship with their environment shows up in the sculptural series named Agora. The power of life tries to make its way. It escapes in the shape of shiny light beams, and vanishes in the areas where darkness prevails, leaving many questions up in the air. The contemporary human being facing extreme individualism emerges with strength.


Exhibited in group, they provide a feeling of shared loneliness. The pieces are hung with threads in a pendant composition.


The installation becomes disquieting as it forces us to think about this “threads” hidden in the shadows, that we knit all around us, and that others are knitting too. 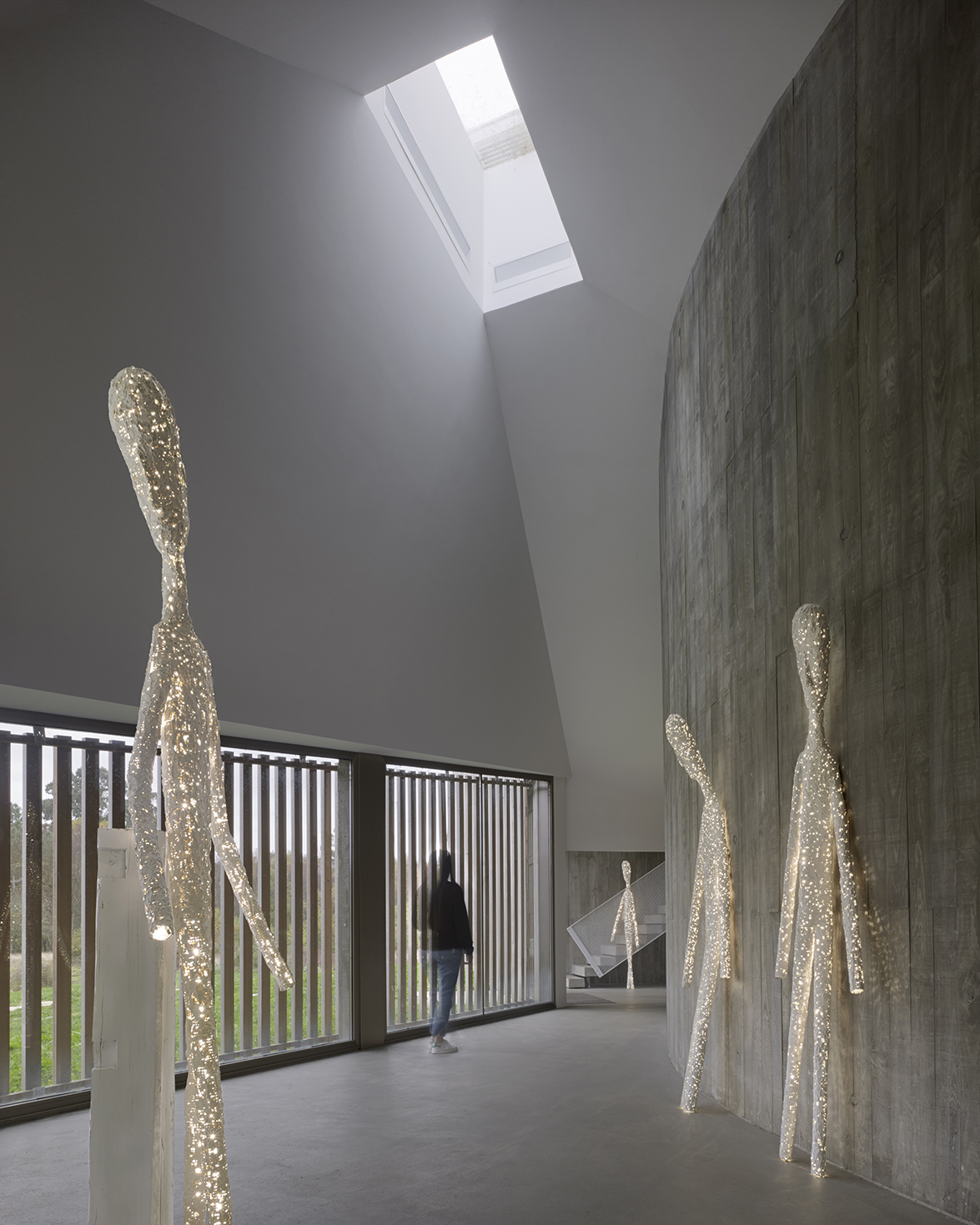 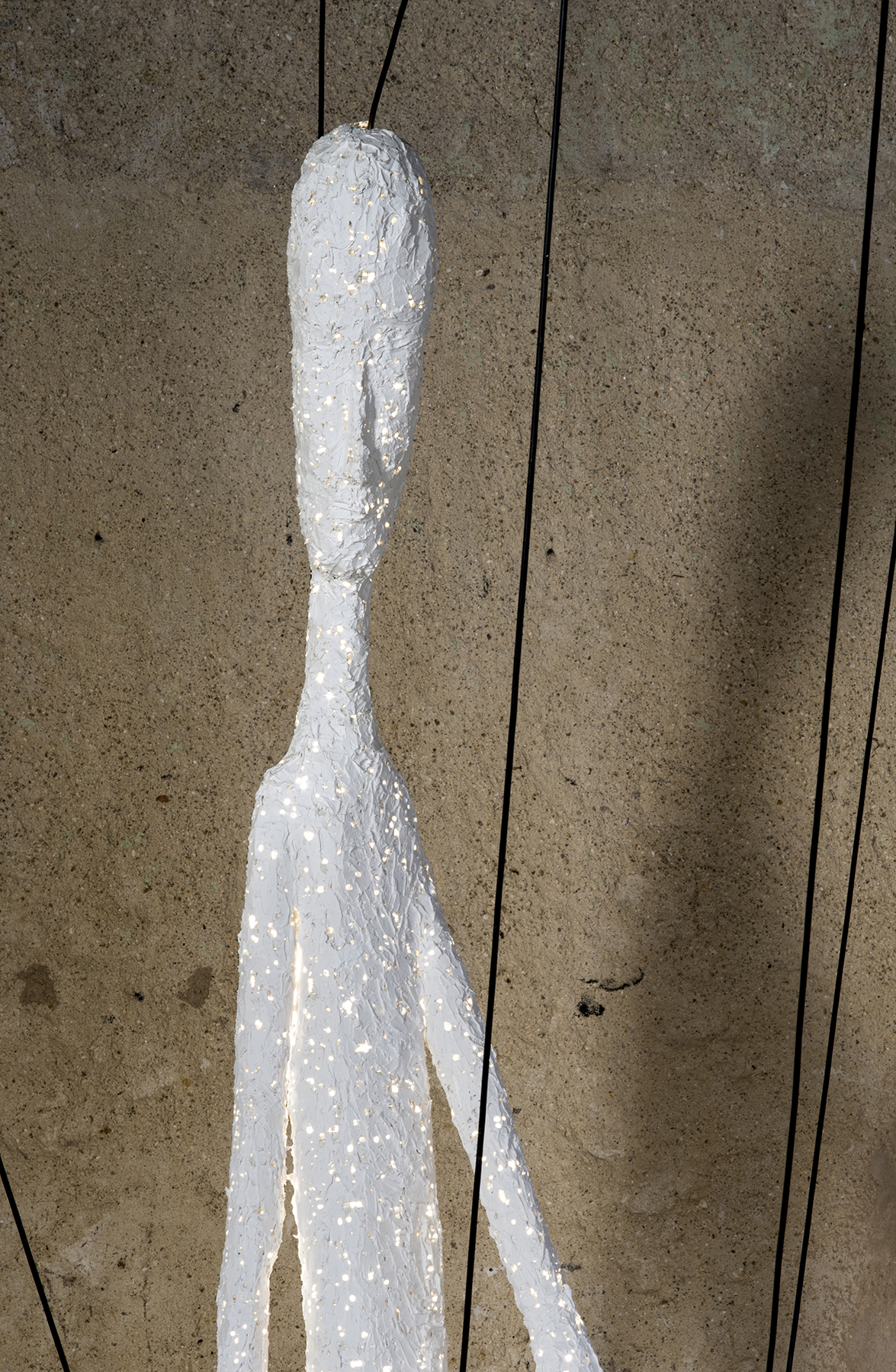 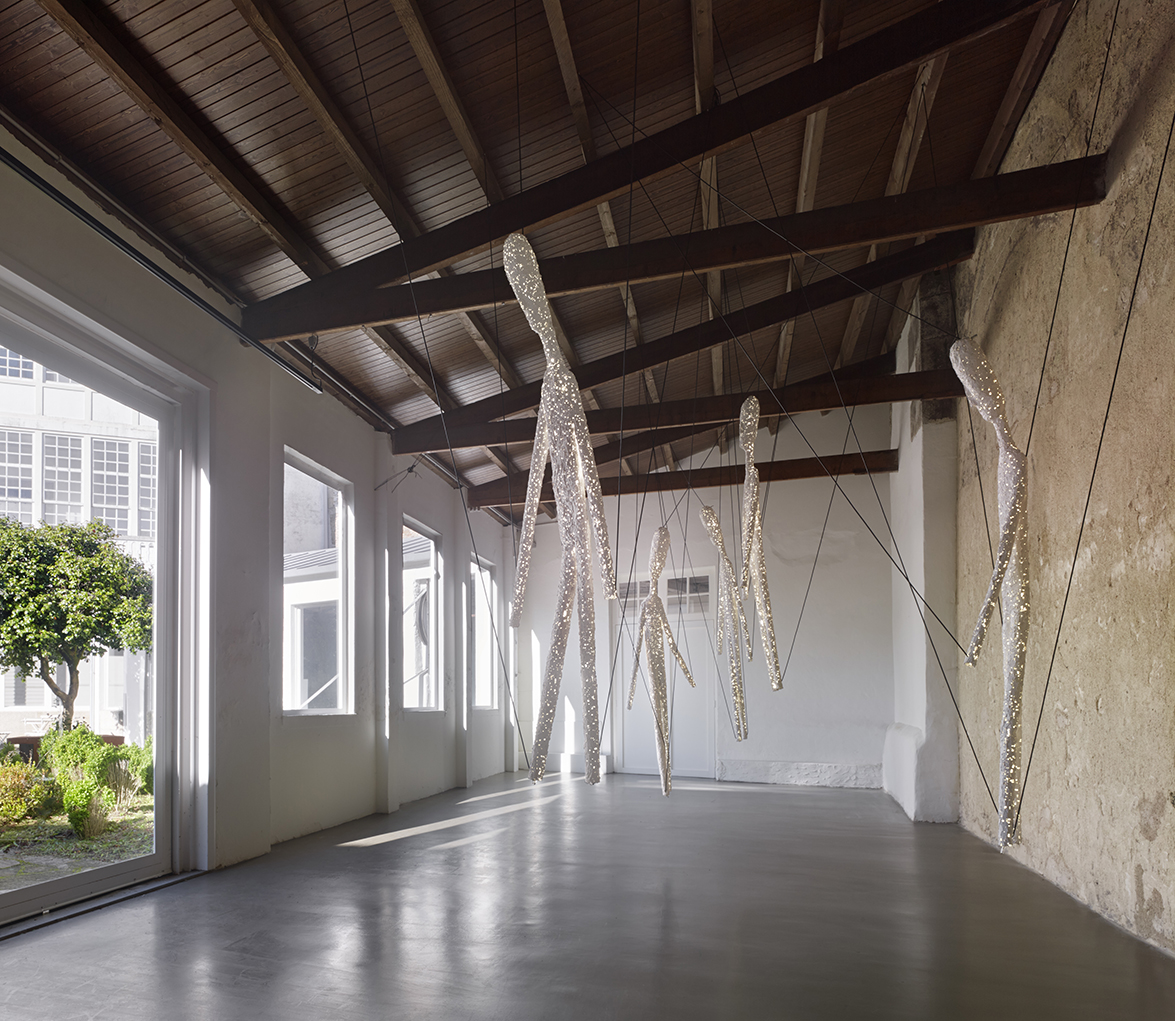 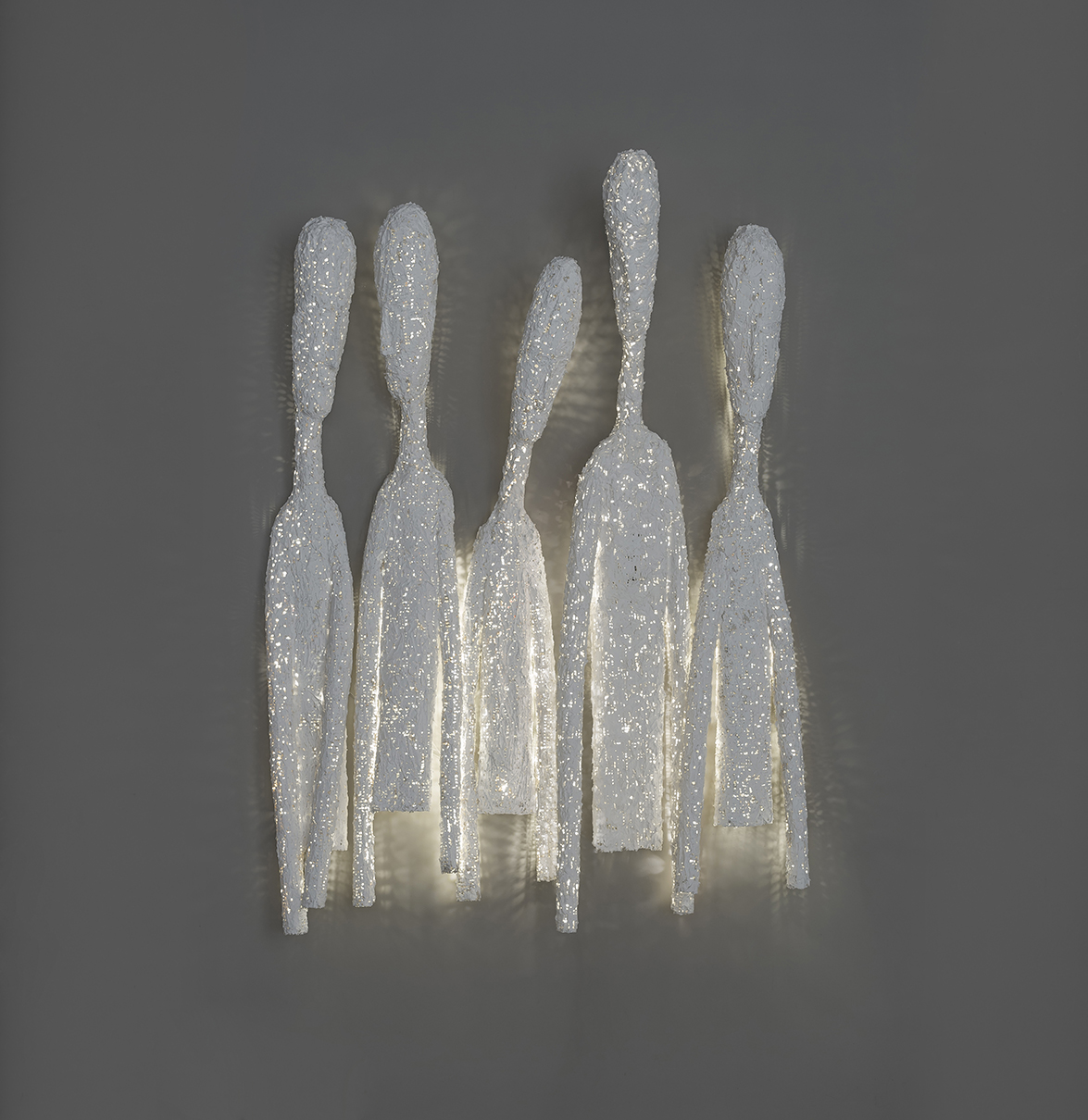 
Encontros is a group of anthropomorphic slender and impressive figures. They observe us, they look at each other —from great heights or closer ones—, probably from a distant place, which the viewer attempts to understand. The inside light they shine is the subtle expression of the human being's strength, of its vital energy and potential. They are families of individuals who intend to dialog among themselves, from their own perspective and singularity, with their nuances. The many nets that wrap the pieces, built by our current society, don’t always help to communicate.


The sculptures are made with extremely plain and basic forms. However, a closer look reveals that every piece is unique and different; complex in its simplicity.


One of them may have a lifeless gaze or even look concentrated. A disturbing peace domains the installation. The long curved shapes of their necks, napes and backs increases their subtle expression, bringing them closer to the observer.


These ethereal bodies, appear to be in movement, when seen as a group, generating a communication that, at times, seems to transcend the human. 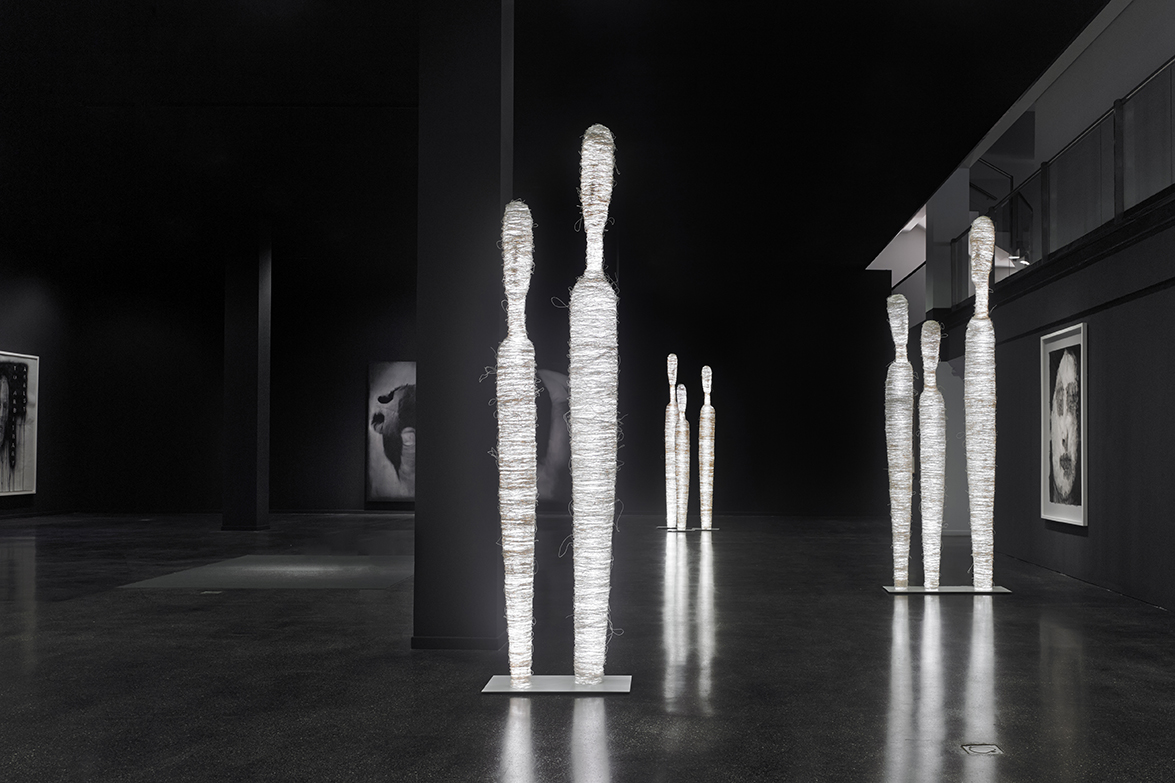 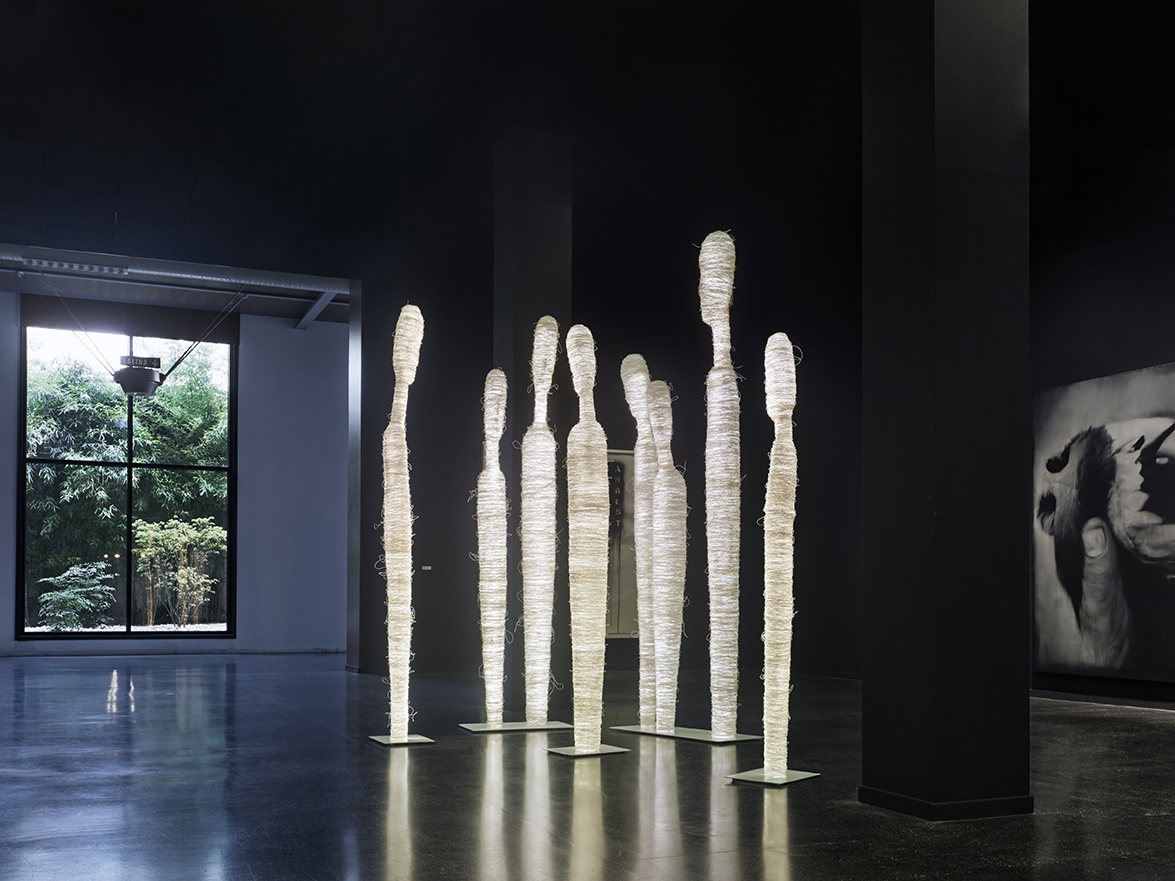 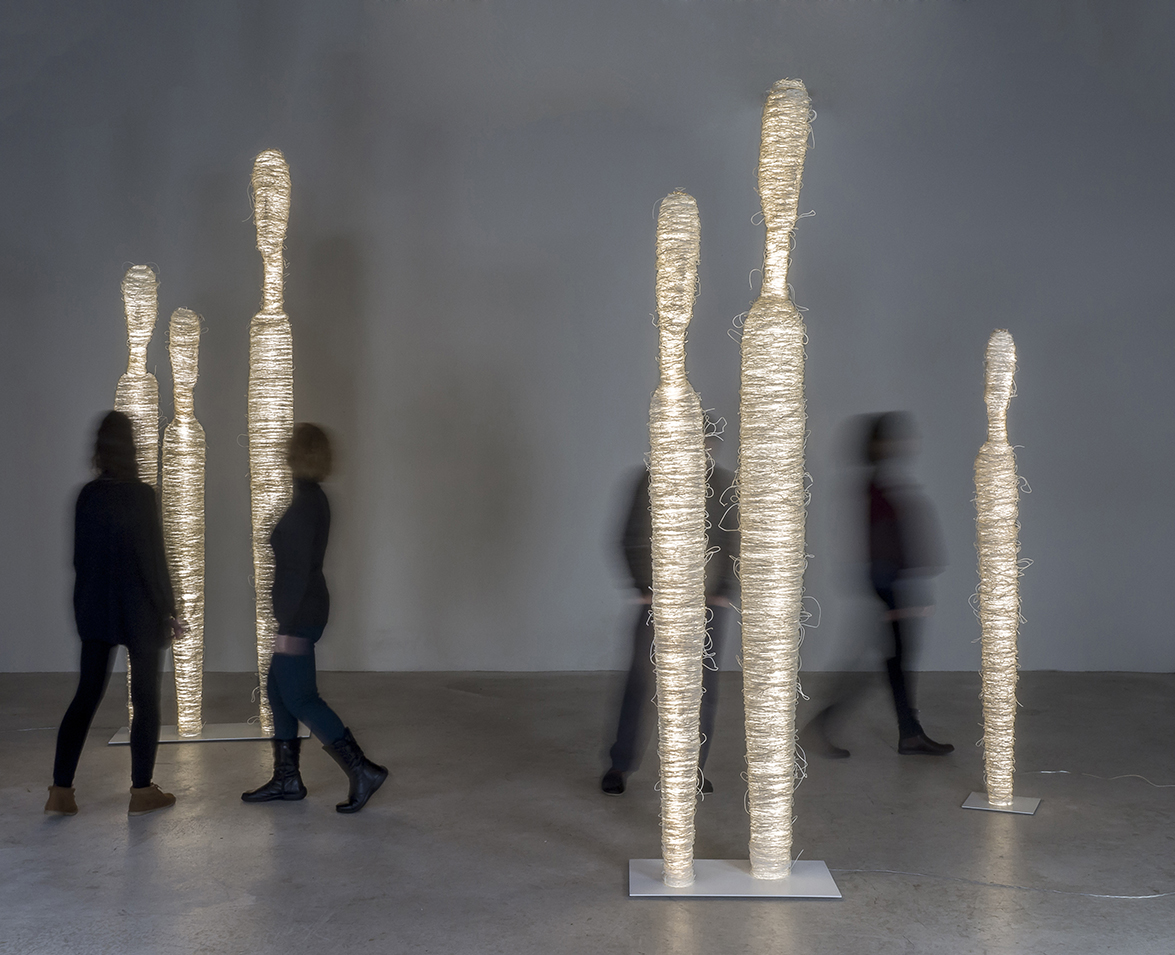 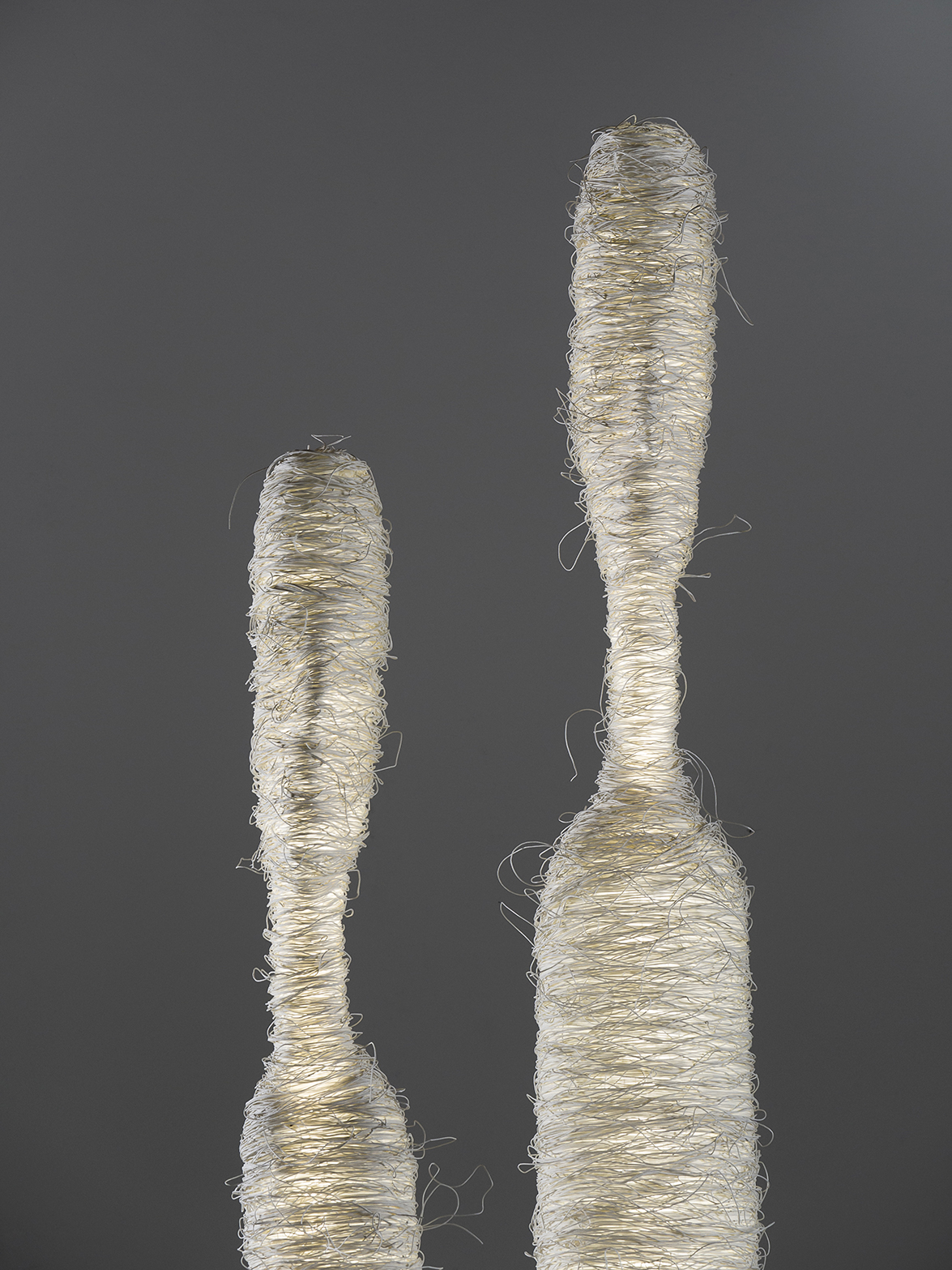 Next Friday, June 16, 2017, Arturo Álvarez inaugurates an individual exhibition under the title ‘Soidades das falas’ at the Luisa Pita Art Gallery, in which he shows his new art collections.


The pieces of Arturo Álvarez have been part of exhibitions in galleries and art museums in Spain, London, New York and Tokyo. Awards such as the “Good Desing Award” or the “Best of Year” of the prestigious New York magazine Interior Design, endorse his career.